What is the area affected by Gust of Wind on a grid?

How does the 10 feet wide line affect areas in terms of squares in front of me if I am shooting directly forwards?

The square I am in is 5' wide, so the row of squares directly in front of me will be affected. But how does a 10' wide line work with the squares on either side of that row?

Do I get the rows on both sides of it? Or just the row on one side, so it's lop-sided? If it's lop-sided, how do I know which row it affects? 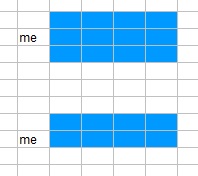 In the DMG about playing on a grid we find:

Thus you will have to choose one of the 4 corners of the square you control as the point of origin. This effectively means that it can only cover a 2 square wide area in all cases and you get to choose to aim it right or left.

I would like to note that I personally would rule that you can aim it straight ahead, but would give those creatures whose squares are only half covered by the area Advantage on the saving throw.

Not the answer you're looking for? Browse other questions tagged dnd-5e spells battle-map area-of-effect or ask your own question.

8
When using the Template variant rule from Xanathar's Guide to Everything, do 5 foot wide Lines actually affect a 10 foot wide row of grid squares?

19
What is a radius on a square grid?
6
Spell placement on a grid, and possibly the differences between “Effect” and “Area”
6
How does the Flaming Sphere spell's area of effect work?
3
How can I tell a creature occupying more than one square is affected by an area spell?
2
How many squares on a 5-foot grid does a 5-foot radius spell affect?
23
What does “within 5 feet” mean in the description of the Call Lightning spell?
15
Can you cast the Fireball spell to target a point such that its area affects an opponent next to you but not yourself?
12
When using a battlemap, can a lightning bolt be directed between squares to affect both?
8
When using the Wall of Fire spell, what shape is a ringed wall on a grid?
12
The Gust of Wind spell creates a 10-foot-wide line of wind originating from the caster; how do I center it on a 5-foot grid?