Do PCs get the attack and to hit bonus from enemy weapons they may pick up?

I'm new to D&D 5e and monster weapons and attacks are confusing. I want to clear this up before I allow this, because it could be a huge mistake.

If my PCs kill a monster and decide to take the monster's weapon, do they get everything that goes along with it from the monster action section? So as an example, I have just killed a Redcap and I take his sickle — does that mean I get the "wicked sickle" action which is a +6 to hit, reach 5ft for 2d4+6 slashing damage, or is it just a sickle?

Really it is the modifiers that worry me. Some of these weapons have some crazy to hit bonuses and I kinda need to know if that is okay to let them have that or not.

That to hit bonus was not from the weapon

Monsters get their bonuses from their stats and features, not from their weapons. For the DM's convenience, these bonuses are incorporated in their stats block.

The Wicked Sickle is not just a mere sickle - it is bigger and looks more like a weapon than an agricultural tool - but it doesn't give the +6 attack modifier.

If a PC wields the sickle, they doesn't get the proficiency bonus (the Wicked Sickle is neither Simple nor Martial weapon), and should add their own STR modifier instead of the Redcap's one.

Another example - a Bugbear's attack:

The Morningstar doesn't deal 2d8 + 2 damage. It deals 1d8 damage by itself, like a normal morningstar. The +2 is from the Bugbear's STR bonus, and x2 is from its Brute feature:

Brute. A melee weapon deals one extra die of its damage when the bugbear hits with it.

No, the players do not get the attack and to-hit bonuses

Yes, the players get the magic item effects (with permission)

Its Challenge Rating is 9. Additionally, its attributes are:

Due to being CR 9, it must also have a proficiency of +4. You can refer to the Monster Statistics by Challenge Rating table in DMG 274. Under the CR column, look for the "9" row. There is a "Prof. Bonus" column to its right which says "+4"

The rules for attack rolls

Flinds use melee weapons for their attacks. Now, any attack roll with a melee weapon which a creature is proficient with will typically be a 1d20 + Strength + proficiency bonus. Sometimes there are other modifiers, such as those provided by Bardic Inspiration, but let's set those aside for now. See the rules on this below:

Modifiers to the Roll

When a character makes an attack roll, the two most common modifiers to the roll are an ability modifier and the character's proficiency bonus. [...]

The derivation of the Flind's to-hit bonus

So now, we can get the to-hit bonus for a Flind. It should be:

What this means is, if you hand the weapon over to another creature with a different proficiency bonus and different Strength score, it will have a different modifier.

The other creature does not inherit the to-hit bonus of the weapon because it does not have the same statistics as the Flind.

If a PC who is proficient with flails picks up the flail from the dead body of a Flind, and say they were level 4 with Str 18, then their to-hit bonus will be +6. This is because:

And still, if another monster, such as a Girallon (Volo's, pg 152) were to suddenly pick up the flail, it would have only a +4 to-hit bonus. Why? Because it is not proficient with the flail. It would not add its proficiency bonus, just its Strength modifier.

What about the magic effects?

Flinds can do three types of attack with the same flail. These are the Flail of Madness attack, Flail of Pain attack, and Flail of Paralysis attack. If the PCs actually pick this up, will they be able to replicate these abilities?

When you look at the image of the Flind, you will see they use magical flails. 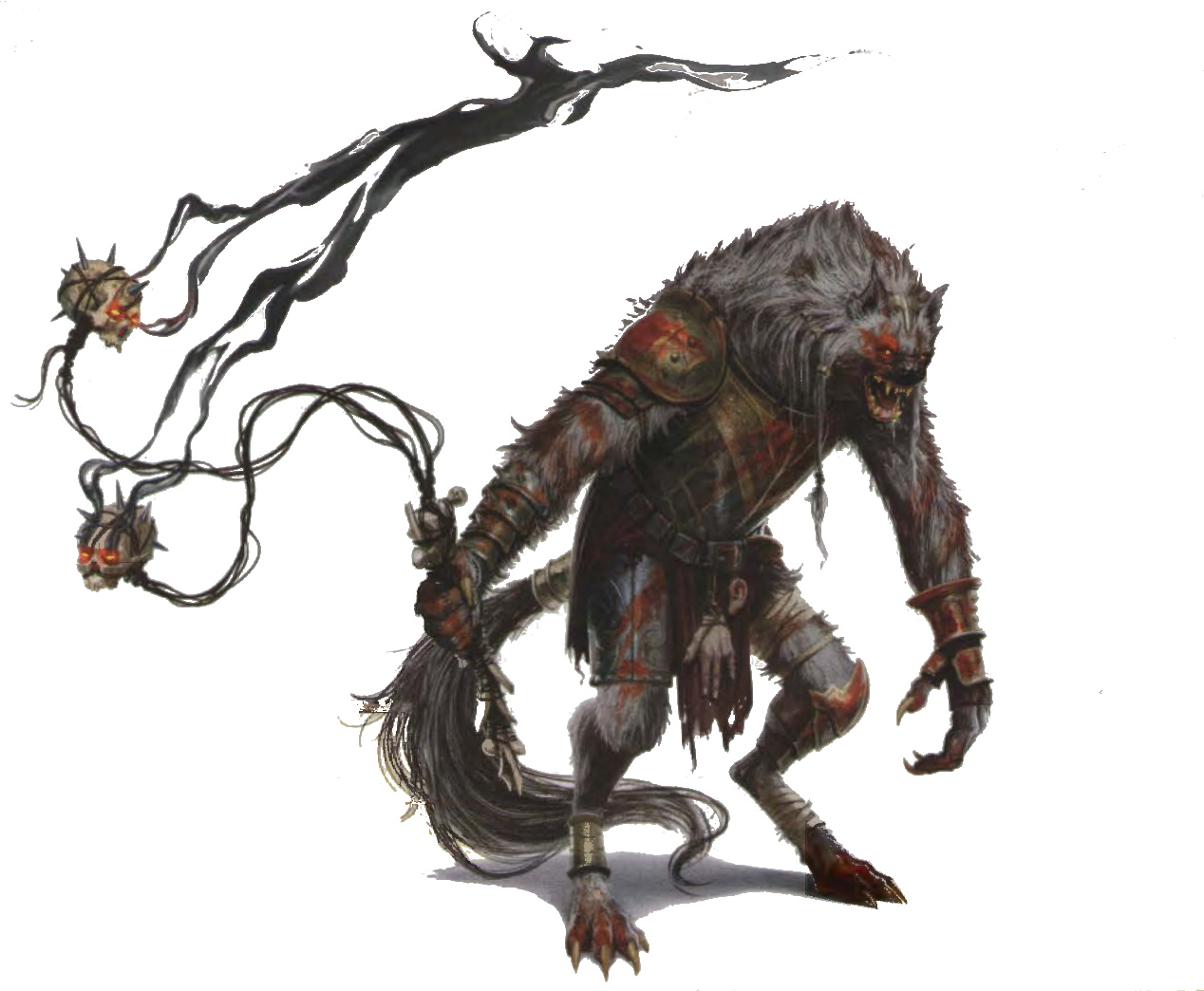 Notice that there are two skull-stars attached to the handle by shadow, not by strings. This may indicate that the flail itself is special, and not something you will find from the PHB.

As support, you will see that the description of the Flind actually confirms this:

A flind is an exceptionally strong and vicious gnoll that commands and directs the war band it is a part of. It wields a flail imbued with powerful magic by Yeenoghu himself. (emphasis mine)

What I imagine is that each star corresponds to a type of attack, and there are three stars, not two. Since this is clearly a magical flail, perhaps the stars materialize at the will of its user. Perhaps I'm imagining something off-base, but whatever the case, the Flind in Volo's pg 153 is clearly using a magical flail.

So what happens when your PCs loot the flail off the Flind?

If they make an attack with the flail and they are proficient in it, their attack rolls will be:

And their damage roll will be:

The damage dice is from the damage dice you see in the Flind's stat block. But there are some additional effects as a result of using that particular flail, assuming you allow them to use these effects.

As the DM, you can just say the flails don't work in the hands of a non-Flind or non-Gnoll. This solves your issue of passing on power to the players unintentionally. But if they were actually able to use the flails, they would be able to do the above.

For additional light reading, you may refer to The Angry GM's Monster Building articles: 101, 201, 202, and supplement. They are entertaining reads which will dissect monster building in at least 20,000 words (warning: he might curse by saying f$&% instead of actually swearing).

No, you do not acquire a monster's attacks by simply picking up their weapon. A sickle picked up in this way would act like any other sickle purchased at a weapons shop.

That said, it's totally valid to use the enemy's weapons to, say, change your damage type from bludgeoning to slashing mid battle. Or just upgrade your shortsword for a longsword.

Not the answer you're looking for? Browse other questions tagged dnd-5e monsters weapons or ask your own question.

26
Does the True Polymorph spell form a creature with equipment?
19
If you kill a Solar Angel can you use its Slaying Longbow?
14
Would a PC deal 1d6 extra fire damage with a Cambion's spear?
12
What is the reason for the difference between weapon damage between character and monster opponents?
10
Can a PC use a Merrow's Harpoon?
6
How much damage does an Ogre's greatclub do when wielded by an Enlarged character?
7
Is a Death Knight's necrotic sword damage innate, or connected to its weapon?

5
Is my CR correct for this Elementalphant monster?
4
How do I calculate a monster's unarmed attack, specifically for slam?
7
Can I apply multiple doses of Basic Poison to a weapon and get a cumulative effect?
17
Does the Reduce option from the Enlarge/Reduce spell cause a critical hit to do 2d4 less damage?
6
With the Great Weapon Fighting fighting style, how does the double-bladed scimitar's damage evolve?
3
Can you benefit from Bladesong while Shapechanged into a Marilith?
5
Does the UA Barbarian Path of the Beast Claw Add the Strength Modifier to Damage?