Do adamantine shields have damage reduction?

The SRD discusses the benefit of adamantine to weapons and armor. It specifies that armor gets damage reduction dependent on whether the armor is heavy (3), medium (2), or light (1). There is no explicit benefit given to a shield, though a crafting cost is provided.

Other than an increase in the objects hardness and HP, is there any benefit for an adamantine shield?

Officially, the only benefit of making a shield out of adamantine instead of steel is that it becomes much more difficult to destroy the shield itself, and bashing with the shield would overcome DR/adamantine. It offers no defensive extra benefits to the wearer above and beyond a regular shield. On the other hand, the 2,000 gp it costs to do so is also relatively cheap, at least compared to the full suits of armor (which do offer DR).

The SRD linked in the question actually omits all mention of shields in the first paragraph where it discusses the effects of the "masterwork quality" inherent in adamantine-based items. This would seem to indicate that the lack of any explicit benefit for adamantine shields could very well be an oversight rather than an intentional omission, since at the very least adamantine shields should be considered masterwork and thus have a reduction in armor check penalties.

As was pointed, the optional armor rules make clear that the AC bonus for shields result from deflecting attacks. As a result, a failure to block an attack while wielding a shield means that the blow "connects" despite the attempted block.

This can be interpreted in two ways:

Now while 1 makes sense when dealing with something small like a buckler or when facing projectile fire, 2 is much more likely when applied to a heavy shield in melee. 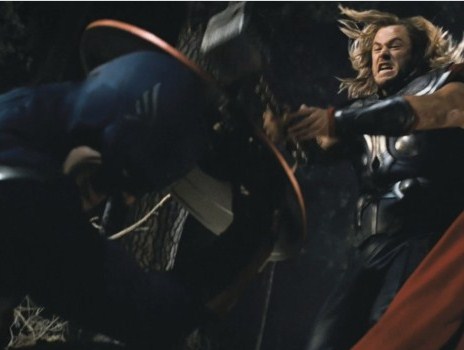 The adamantine breastplate has both damage reduction (over and above the optional rules linked above) and AC bonus, even though one might argue that a "hit" might be a blow to the arms, head or legs, none of which are protected by a breastplate. Implicitly we're assuming that the blow impacts but is mitigated by the adamantine within the armor in the event that the AC bonus of the armor doesn't "stop" the attack.

Applying that same logic in this case would give us option 2 - a standard metal or wooden shield doesn't provide protection from a "direct" blow that connects with the shield. But this would mean that some sort of DR should apply if the shield itself is made of adamantine. Tentatively, I would suggest that the SRD providing shields categorized as "light" and "heavy" in the armor table would mean that they should be treated as armor of that type for determining DR from their special materials.

A shield already provides as much AC as leather armor - what you gain in an "easy AC bonus" you sacrifice for not being able to wield two handed weapons, bows, or just having a free hand in combat. If the material provides inherent damage reduction when incorporated into armor it is NOT an imbalance to have that same reduction apply to a shield, since the tradeoffs of one vs the other is already incorporated into the ruleset.

8
What's the benefit of a Druid (or a Warrior Druid in particular) having a shield?
5
How does DR granted by the feat Roll With It actually work?
13
Is this house rule replacing encumbrance balanced?
9
What Armor Optimization applies to a Mithral full plate?
8
What would be the price of Adamantine Plate armor?
6
Break DC too low?
10
Are these two homebrew shields balanced?
1
Abalative Armor and Stone Construct Interplay
10
For the Redemption paladin's Aura of the Guardian feature, can the damage the target would take be reduced before Aura of the Guardian triggers?