What low- and mid-level spells result in humanoid corpses?

Let's assume that going to the local humanoid settlement and magically blasting to death a townie isn't an option. Likewise, any cunning plan to lure—magically or otherwise—a humanoid from that settlement to you won't work either. The spell or combination of spells must bring forth a humanoid corpse that lasts for at least 7 days, 10 preferred. 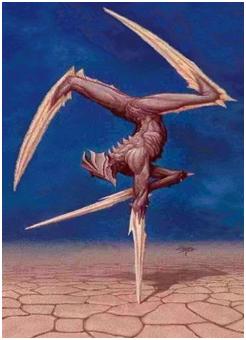 What? Your DM doesn't use terrifying awesome monsters?

In my campaign a troupe of deadly dancers resides on the Ethereal Plane near a fortress filled with humanoids. The deadly dancers were ambushing patrols in hopes of snatching humanoid corpses so that the troupe can make more of its kind. This was dangerous: patrol leaders are hardened war veterans, and the troupe's losses barely equaled the recovered humanoid corpses. A red ethergaunt—that can cast spells like a 9th-level wizard—discovered this troupe of deadly dancers, learned their dance-based language (I'm so not kidding—take that, Drow Sign Language!), and earned the troupe's allegiance by using the 5th-level Sor/Wiz spell lesser planar binding [conj] (PH 261-2) to call low-level fire gnomes (Planar Handbook 125-6). Rather than cutting deals with the fire dudes, the red ethergaunt has the deadly dancers murder the extraplanar fire dudes, and the dancers employ the corpses to increase the troupe's number.

While the ethergaunt's process works, the optimizer in me sees this process as clumsy and thinks that a red ethergaunt with its Intelligence score of 23 (and the folks on RPG SE) can do better. With access only to…

…are there other, more efficient ways to generate humanoid corpses to facilitate deadly dancer reproduction that don't involve interacting with a settlement?

The robe of bones takes two days, 1200 gp, and 96 XP to craft, but requires only the Animate Dead spell, which is 4th level. It produces 8 humanoid corpses (in the form of undead goblins and humans), of which 4 are skeletons and thus maybe don't count as blood sources and 4 are zombies and thus probably count as blood sources. It's possible that, being created purely from magic, these corpses (once produced) count only as the corpses of destroyed undead creatures and not the corpses of humanoids, which is also a snag. Assumming that at least the 4 zombie corpses work, though, this is as fast as casting lesser planar binding and has the benefit of being [evil] instead of [fire]. If all the non-wolf corpses work, it's actually faster than casting lesser planar binding, but does consume material resources.

In summary, it's expensive, produces corpses of dubious quality, and not terribly much faster than just casting the binding spell, but it does work in addition to the binding spell and thus might be of use.

This could be the cheapest way. Adventurers are willing to take all the risks for little pay and provide extremely high yields. You can meet adventurers anywhere: at a campsite, at an inn, out in the forest, on the ethereal plane, etc... And they will usually not challenge.

Send the adventurers against a local group of humanoid they dislike (for whatever reason): azers, goblins, kobolds, orcs, etc. The advantage of this is that you create a protagonist as the PCs are lower levels, and an antagonist for higher levels. You need to find a good cover story

Spells: Alter Self (2)/ Disguise Self(1) and undetectable alignment(2) ethereal jaunt as 5th level. Or you can make a deal with an ethereal filcher or something like that.

Not the answer you're looking for? Browse other questions tagged dnd-3.5e spells monsters .

11
Sustainable farming of humanoid brains for illithid?
9
Attract powerful creatures to kill then animate
12
Does a monster that casts spells as a wizard need to prepare its spells from a spellbook?

11
Can low level priests cast high level spells off scrolls?
8
Can a construct be undestroyed?
15
I have 100,000 gp but can't buy gear. What do I spend it on?
4
Can a low-level wizard learn and cast higher-level spells?
7
Protection against mind-affecting spells (low resources, high-level, low will save)
19
How can a party defend against the Nightmare Haunting action of a Night Hag?
5
How does greater anticipate teleportation interact with time regression?
9
How comprehensive is total vision?
7
What low-level wizard/cleric spells can create permanent difficult terrain?
7
Is this 9th-level spell Find Greatest Steed balanced with respect to other 9th-level spells?