Advantage on damage rolls - is it still balanced?

Something that bothers me about the advantage/disadvantage system is that it doesn't actually affect how much damage you do in a single attack, only the likelihood that the attack will hit. For example, when I think of a Barbarian using Reckless Attack to "attack with fierce desperation", I don't think of that as a precision strike; rather, I see it as an attack that should have just as much chance to miss, but hits like a freight train if it hits.

Based on this, I had the idea to change how advantage works for some attacks. The new rule (let's call it damage advantage) would work like this:

What I'd like to know, then is how damage advantage would compare to attack advantage in terms of average damage dealt. The part that I'm having trouble calculating is how this would scale as PCs level up, and against weaker/stronger NPCs. Essentially, low/high attack/damage bonuses vs low/high AC. I'm hoping that damage advantage should excel in some circumstances while attack advantage should excel in others, but I want to ensure that overall, assuming an even distribution of combat scenarios, both systems should turn out to be equally useful, so that at the end of the day no character should feel that their advantage rolls were nerfed or that another character's rolls were buffed.

Whether or not damage advantage would be fun/confusing is beyond the scope of this question. I just want to ensure it's balanced.

I went ahead and wrote an AnyDice program to compare the two, and if you'd like to go fiddle with it, you can find it here. In the program, I compute average damage per attack for both Attack Advantage, and Damage Advantage.

I ran multiple tests with different weapons, AC bonuses, and Attack Bonuses and came to the following conclusion.

If the target's AC is more than 3 points higher than your Attack Bonus (which is usually the case), then Advantage on Attack Rolls yields a higher average damage than Advantage on Damage Rolls does. This holds up for all weapon dice-sets that exist in the PHB.

So, to give one example: that of a character with 20 STR and a Longsword...

This pattern holds true as you increase AC...the larger the gap between AC and the Attack Bonus (and, in general, there will be a significant gap between the two) the less useful Damage Advantage will be.

That being said, I discovered another situation in which Damage Advantage holds up better. If you do not have the two-weapon fighting feature, and so your off-hand damage does not gain the +damage from the attack stat, then the AC/Attack Bonus margin increases to 5, instead of 3. i.e. +10 to hit vs AC 15 with an off-hand weapon (no bonus), Damage Advantage is better. But, even here...it won't be often that you have such a high Attack Bonus against something with an AC that is low enough you only need to roll a 4 to hit it. So, practically speaking...this doesn't matter much.

Damage advantage can give better damage when the opponent's AC is low compared to the attack bonus. For these computations I am ignoring double damage on criticals and critical misses both for simplicity and because it is unclear how that would work in this system. 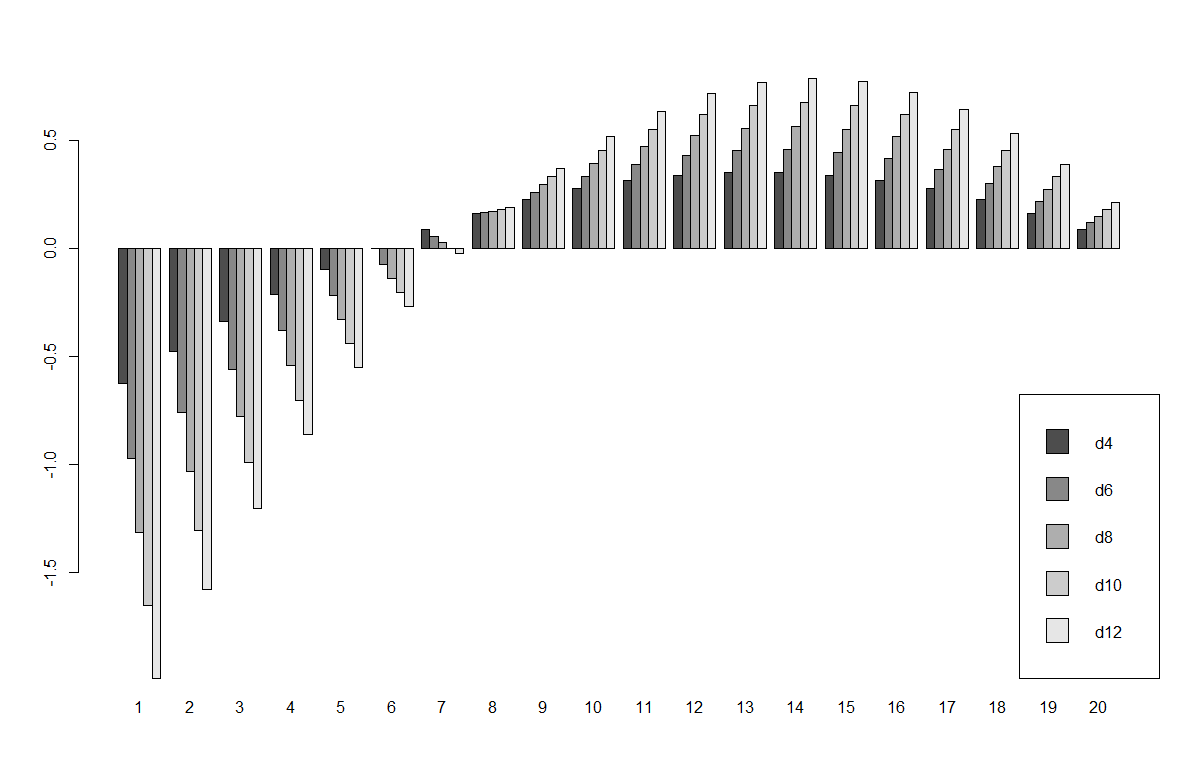 We see that when even low rolls will hit the enemy, damage advantage is preferred and somewhere between needing to roll a 6 and an 8 it switches to prefer attack advantage with lower dice weapons switching sooner. However, average damage isn't the only thing to consider when looking at damage. Lets look at the distribution of damage on a successful hit using a d12 as an example. 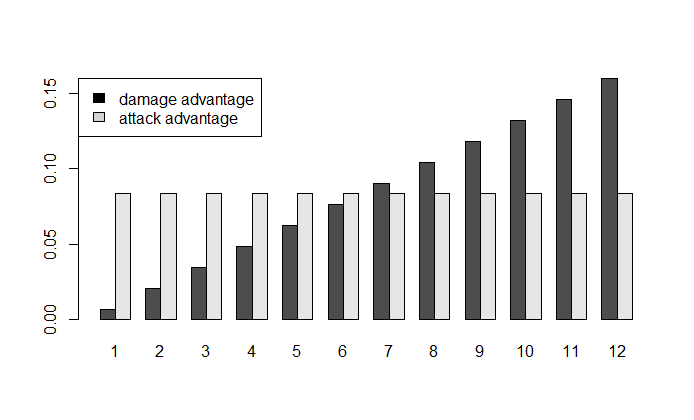 We see that while damage is uniform for attack advantage, the odds of getting a particular damage value actually increase linearly with the value of the damage. This means that for an n sided die, you are 2n - 1 times more likely to roll max damage than min damage with damage advantage, where as you are equally likely to do either with attack advantage.

What does this mean from a practical stand point? Basically, it will make easy enemies even easier. If one character doesn't have to roll very high to hit another, not only will they do more damage on average, but there will be a lot more quick kills as the odds of rolling higher damage is better. This can also be problematic for PCs in a boss battle. Usually bosses have high ACs to keep the battle interesting, so attack advantage won't help the PCs. On the other hand, bosses frequently have high attack bonuses, meaning attack advantage could really help the bad guys out. This may be very bad for PCs because increased probability of high damage means that the "lucky hit" that kills a PC becomes a lot more likely.

guildsbounty prepared an Anydice program this answer builds off of.

2)This version is sometimes better for multidice weapons than the simpler and more intuitive 'roll twice and take the better result' advantage mechanic, but by only around at most 1.4%. For any source dealing 5dX or better, regular advantage on the damage roll is better, again by a usually irrelevant amount. Even for a 26d6 dragon breath, the difference between methods is only 2.5 points of damage, or 2.7% the other direction. Of course, even regular damage advantage only adds around 5.5% damage at that point, so the relative difference is more than 100% of the damage your method would deal, but neither method is worth much of anything.

3) regular advantage increases your average damage by a percentage based solely off your chance to hit. When hitting is 50:50, which in some playstyles is most of the time, you get a 25% increase in average damage. When the chance of hitting is lower, the increase in damage is higher. Regular advantage also doubles your chance to roll a natural 20.

What to do instead?

I've played with a group that similarly wanted to have a damage-increasing advantage-like mechanic. When a character had damage advantage in that group, in addition to rolling the dice for damage twice and taking the better result, damage dice rolling the maximum value would explode, causing another die of that type to be rolled and added to the total, with its own chance to explode. This mechanic is almost as good as advantage on the attack roll in 50:50 situations, though it does increase the maximum damage an attack may deal as well as the average damage. It also synergizes well with options like Great Weapon Fighting that allow damage rerolls on low numbers. The critical point for greatswords is at 6 points below the target's AC, at which point (and for all higher accuracies) damage advantage is superior to attack advantage. For a greataxe it's at 5 points. Below that level this kind of damage advantage is superior only in that it gives you a chance to take down opponents you might not otherwise have had any chance of taking out, and the increased chance of an opponent not getting another turn is sometimes worth the theoretical decrease in average damage.

Note that even with this system, damage advantage is still weaker than attack advantage, it's just only very slightly so, instead of dramatically so.

Not the answer you're looking for? Browse other questions tagged dnd-5e house-rules balance statistics advantage-and-disadvantage .

15
How does replacing Advantage with a flat +2 affect Champion critical hit damage output?
33
What happens if a creature is killed between its attack and damage rolls
20
What are the balance effects of counting instances granting Advantage and Disadvantage to determine Advantage?
18
Balance implications of removing unseen-attacker advantage when mutually unseen
21
What issues could arise with this Advantage/Disadvantage Variant?
4
How many damage rolls do you make for the Prismatic Spray spell?
10
Would it be fair to use 1d30 (instead of rolling 2d20 and taking the higher die) for advantage rolls?
6
How would this House Rule for combined Advantage/Disadvantage Impact Rolls?