Can a character react to an action and take a regular action in the same round?

I've been looking for clarification on the rules around reactions. I know this is a topic that seems to pop up on here a lot so there are many related questions (this one, this one, and this one ), but none that I have found that directly answer this question.

Let me give an example: Say Sorcerer Tim casts fire-bolt on his turn, but says he will cast blade ward on himself as a reaction if anyone attempts to strike him with a melee weapon, do the rules support him in still being able to blade ward himself. (Note that blade ward does take 1 full action to cast).

On your turn, you are able to Move and take an Action. Examples of actions can be found in the PHB (192-3) and include Attack, Cast a Spell, Dash, Disengage, Dodge, Help, Hide, Search, and Use an Object.

There is one Action you can take that will use your reaction if you choose to use it after your identified triggering event as well: The Ready Action. Should you take this, you have an opportunity to use your Reaction to take an Action based off of a triggering event. Rules for this can be found in the PHB on page 193.

If you have an ability, spell, or some other means where a Bonus Action is available to you, you may use one on your turn.

These are typical in response to a triggering event. Either one that you decide, As with the Ready Action or one that is used as defined by another class ability or spell. An example of this is Counterspell (PHB, 228)

As some reactions can be taken on or outside your specific turn, such as Ready and Counterspell, others can be taken later or earlier in the round, such as Counterspell or Shield - a character is able to use Actions, Bonus Actions, and Reactions during the Initiative Round.

Example 1 - No, Tim would not be able to do this. He has spent his Action casting Fire Bolt. He can't prepare Ready Action because he no longer has an Action to spend.

Example 2 - No, Tim is still limited by his use of his Action casting Fire Bolt. If he had another Action available (e.g. Fighter's Action Surge), he might be able to set up that reaction, but it takes an Action in order to have a Reaction. There are numerous other roadblocks to why this example fails (Readied actions require completion of trigger - so a defensive buff would be 'too late' and that you can only ready a spell with a 1 action cast time.)

My Example of an Action and Reaction on same turn

Tim casts fireball at a group of enemies using his Action. It is now the turn for the enemy Wizard, who follows up with his own Fireball. In response, Tim uses his Reaction to counterspell it.

You don't see it anywhere in the rules because there is no restriction. Your reaction is an extra action in addition to your normal actions for the turn - performing an action on your turn does not remove your ability to take a reaction, and using your reaction doesn't stop you taking a normal action on your next turn. However...

You can only take a reaction when the rules specify that you can. The most common case is the Opportunity Attack, where the rules specify that if an enemy tries to move out of your melee reach you may use your reaction to instantly attack them. You could also cast a spell that has a casting time of 1 reaction, such as Shield. You might also have class abilities or feats that specify conditions where you may use your reaction to cause some effect.

If you want to declare an action that you will take in response to some arbitrary condition, as in your examples, you must use the Ready action on your turn in order to do so, as per the PHB pg 193:

Sometimes you want to get the jump on a foe or wait for a particular circumstance before you act. To do so, you can take the Ready action on your turn so that you can act later in the round using your reaction.

First, you decide what perceivable circumstance will trigger your reaction. Then, you choose the action you will take in response to that trigger, or you choose to move up to your speed in response to it. Examples include "If the cultist steps on the trapdoor, I'll pull the lever that opens it," and "If the goblin steps next to me, I move away."

When the trigger occurs, you can either take your reaction right after the trigger finishes or ignore the trigger. Remember that you can take only one reaction per round.

If you do take the Ready action, that is your action for the round, and you cannot use it to do something else, like cast a spell. You would still be able to use your bonus action on your turn if there's something you can do with a bonus action, but your normal action is used up by Ready. This means the examples posed in your question are not legal because Fire Bolt requires an action to cast, so you don't have an action left to declare a Ready.

You could forgo casting Fire Bolt and instead use the Ready action to prepare a spell to be used in response to some trigger. However, there are restrictions on how you can use Ready to cast spells:

When you ready a spell, you cast it as normal but hold its energy, which you release with your reaction when the trigger occurs. To be readied, a spell must have a casting time of 1 action, and holding onto the spell's magic requires concentration (explained in chapter 10). If your concentration is broken, the spell dissipates without taking effect. For example, if you are concentrating on the web spell and ready magic missile, your web spell ends, and if you take damage before you release magic missile with your reaction, your concentration might be broken.

So you could Ready an action to cast Blade Wall in response to an attack, because that's a spell with a casting time of 1 action. However, you couldn't Ready an action to cast Expeditious Retreat, because the casting time for that is a bonus action. You should be aware though that the Readied action completes after the trigger you specify, so if you say "I'll cast Blade Wall if someone attacks me", they get to hit you before you get to release the spell. You'd be better off declaring that you cast such a defensive spell if an enemy moves such that it threatens you, so it would go off before they actually made the attack.

Actions, reactions, and bonus actions are three different things. You are restricted to one of each per round unless otherwise specified. However, the Ready action uses both your action and reaction as part of its description (your action to use the Ready action, and your reaction to actually resolve the readied action).

Your stated examples: No

You can take an action on your turn and still do an Opportunity Attack if the opportunity arises.

You cannot ready an action as well as attack in a single turn, but you can attack (or take any other action) and still have your reaction available to make an Opportunity Attack or cast Shield (which has a casting time of 1 reaction). This combination is quite common.

It is possible to get use a Reaction during your turn. For example, your character casts a spell and a foe counters it with counterspell. You can use your Reaction to cast counterspell to counter their counterspell, all on your turn. You now can't make any opportunity attacks or do anything else that requires a Reaction, until the start of your next turn.

“Can a character react to another person's action, and then take a full action on their turn?” - Yes, as long as it is the first time they are reacting in the round.

“Does it work the same in reverse?” - Yes, the order doesn’t matter

“Can a character take their normal turn to do an action, and then react to an action later in the same round?” - Yes. A single reaction can be taken at any time in the round.

“What about a bonus action?”

Anyone can take a non-casting action, bonus action and reaction in the same turn. The rules become more complicated when talking about spell casting though. I made this chart in an attempt to clarify the spell casting rules in my head (including some in-game reasoning). I think it covers your example scenarios. 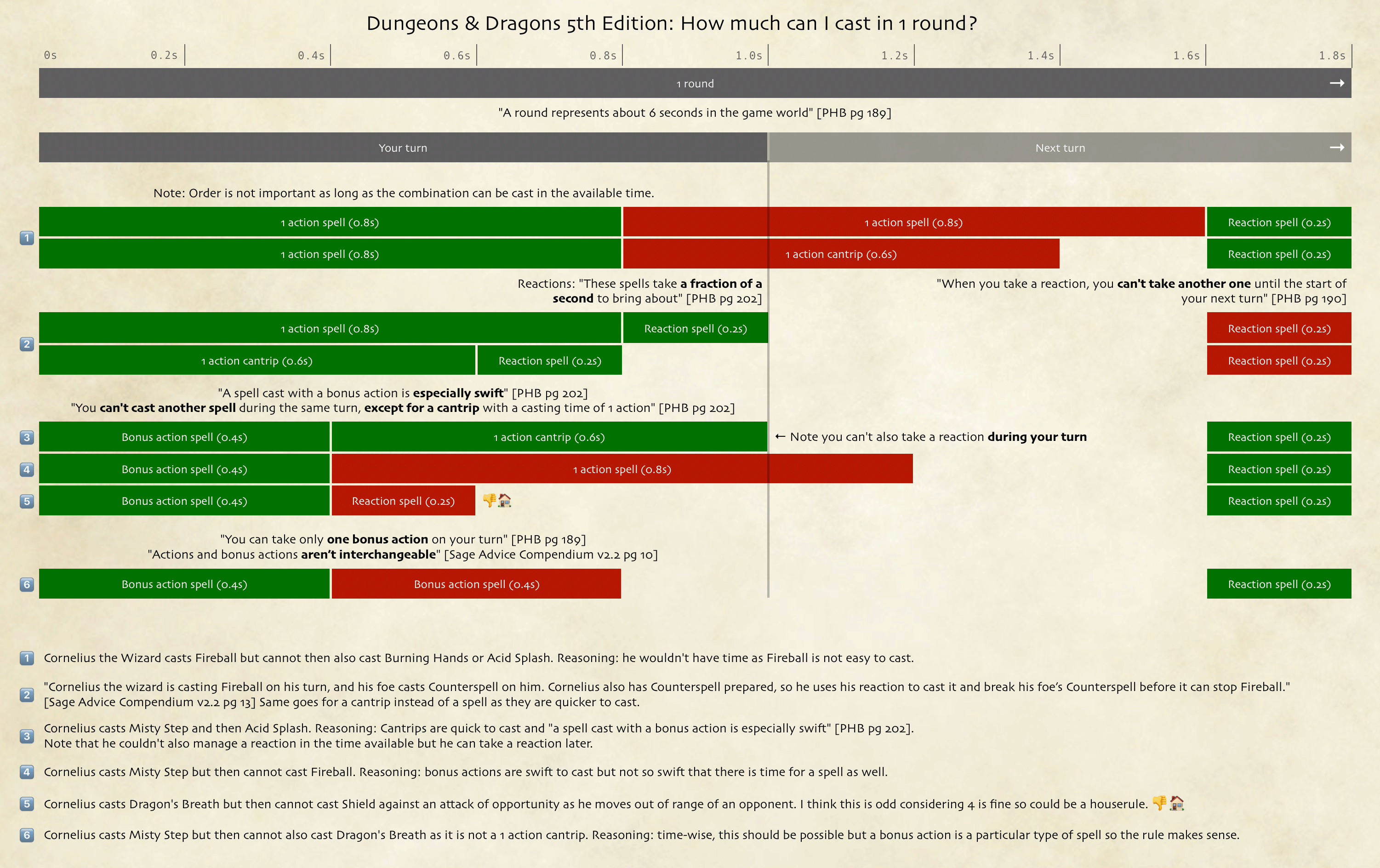 Not the answer you're looking for? Browse other questions tagged dnd-5e actions reactions or ask your own question.

12
Can you use a Bonus Action on a turn other than your own?
11
“Ready” and “Reaction” and “Uncanny Dodge”
8
How does taking an action with my reaction work?
9
If I used a Ready action to attack, can I still use my Reaction to attack on the same instance?
8
When does a character's reaction reset, per turn or per round?
3
Can a character take a reaction before their turn?