How would changing critical hits like this affect my game?

Everyone gets excited when they see that dice roll turning up a 20. A 20 on a test means that you succeeded on what you were trying to do in the best way possible — it's a rewarding situation that makes up for all those critical failures.

But, sometimes in combat, it doesn't quite feel like that. You see that 20, you roll one more weapon dice and... you roll so bad that the damage doesn't feel critical at all, doing less or as much damage as a normal attack.

I know that there are feats for re-rolling that 1 or 2, but I wanted crits to feel more deadly either way.

I was thinking about instead of rolling the weapon dice twice on a critical, give the player/monster a maximized weapon dice and then rolling one weapon dice+mods as normal.

I'm just worried about 2 things that comes to my head:

I suck at math so I don't know how this will turn out, also, I might be missing some other skills/mechanics that could take too much advantage of this change. So, would applying this rule unbalance my game in some way?

Having played with this exact houserule for over a year, I can say with some confidence: This houserule does not make much of a difference to the game, except that it does indeed prevent the feeling of disappointment that crits can sometimes cause.

Mathematically, the strongest case for this is indeed the d12, which, on a crit, will deal an average of 13 damage (normally), or 18.5 damage (with this houserule in play). That's an average increase of 5.5 damage, which, honestly, is not a lot.

One caveat to the above: It assumes that your houserule will only work once, i.e. a high-level Half-Orc Barbarian will only get to maximize 1 of the 6d12s he rolls when he crits.

The second thing to consider is that crits are just not common enough for houserules like this one to have a big impact on the game. High-level Champion Fighters get them on 3/20 attacks instead of 1/20, and Assassin Rogues get a guaranteed crit every time they manage to surprise an enemy, but even those classes don't get crits in any way reliably.

While the average damage doesn't change much, the distribution of damage changes quite a bit. For the sake of this discussion, I am only going to address situations where it goes from rolling one dice twice to roll one + max, since the OP doesn't discuss how things like sneak attack would be handled.

However a lot of what playing a system feels like doesn't have to do with average rolls, it has to do with the distribution of rolls and real difference between the two methods is in the distribution of damage dealt. The sum of rolling two dice approximately follows a triangular distribution, whereas rolling one dice and taking the max of the other is uniform. Below is a graph showing what the probability of rolling each possible value is for a d12 to illustrate what that looks like in practice. 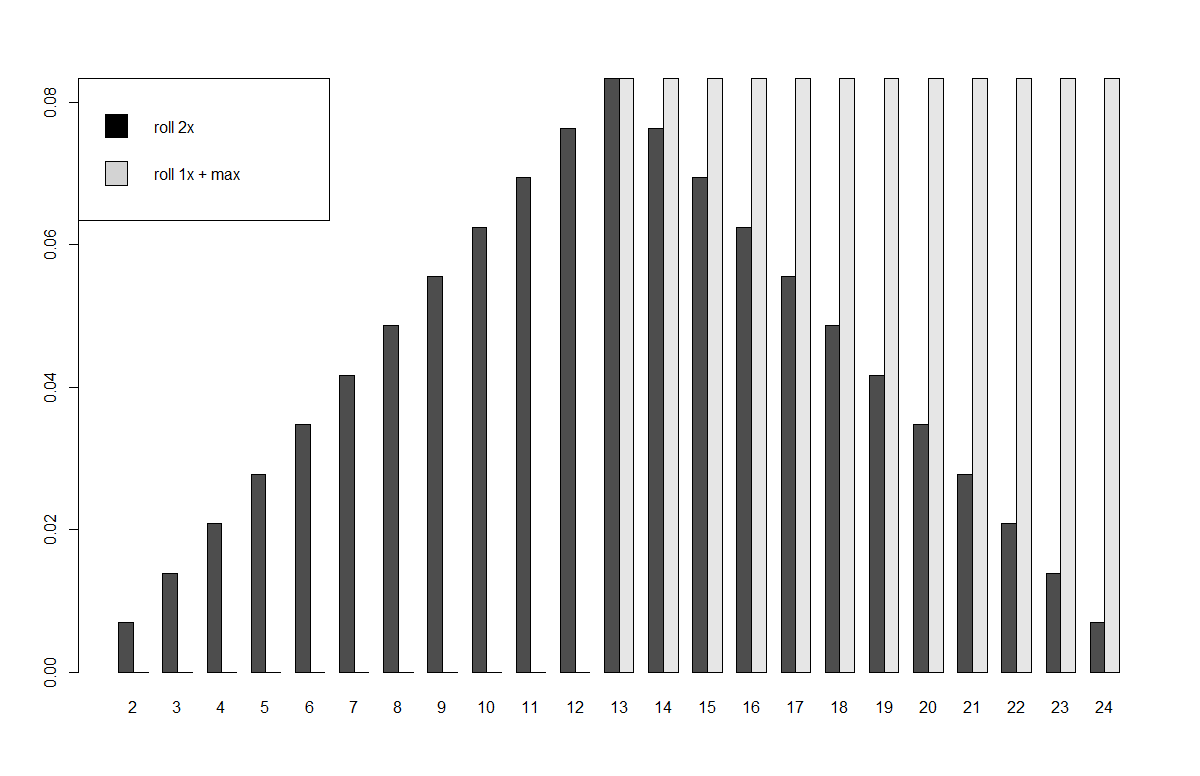 As you can see, the probability of getting average damage for rolling two dice actually doesn't change when you switch to roll one + max; it is still 1/n. The real difference is that the odds of getting higher values of damage go way up, with with the higher the value is, the more the odds of getting that much damage increase. The odds of rolling max damage go from (1/n)^2 to 1/n. That means the increased probability of rolling max damage is multiplicative with the number of sides on the dice, meaning the effect is much bigger for a high valued dice like a d12 than for a small valued one like a d4.

From a practical standpoint, this means that not only will your average damage go up, but the game will feel much "swingier". When rolling two dice, most of the time you will roll close to average damage (as seen with the triangular shape of the probabilities), but with rolling one and maxing the other, you will roll somewhere between the average of roll 2x and max damage with equal probability. This means max damage will happen much more often. It also means you are doing more favors for your fighter with a greataxe than for knife wielding assassin.

As Dale M points out your PCs are going to feel this more than your NPCs because they get hit more often. Once again, on average, this may not be a huge difference in the amount of damage they take in a day. However, since you are greatly increasing the odds of those high valued crits, that also means that your odds of a PC getting absolutely trounced goes up drastically as well. PCs usually don't die on days when things do average damage, they die when the bad guys happen to roll well. Since you are drastically increasing the odds of bad guys rolling well and that only needs to happen one session to kill a PC, you are also increasing the odds of PC death.

Is this really a problem?

The chance of rolling less on a critical than you would roll on a non-critical is actually quite low. The greataxe (1d12) is the most likely that this will happen for and the chance is less than 10% that it will be less and just over 13% that it will be the same. Yes, it seems like rolling 2d12 to get a 5 or 6 is worse than rolling 1d12 but it isn't: the damage with 1d12 would have been a 2 or 3.

Only innumerate characters would want this change

The reason is simple: PCs take most of the critical hits so anything that makes them more powerful hurts the PCs more than it hurts the monsters.

There are two reasons why PCs take most of the criticals. The not very important one is that most of the spellcasters in the game are PCs and a lot of the spells cast do not use attack rolls. However, this is insignificant compared to the major reason: the PCs are in every fight, the monsters are only in one!

Is it a significant change?

This anydice allows comparison of the two methods. You can use whatever numbers you like: I have used an AC of 12 a modifier of +5 and 1d8 damage.

On a single attack the expected damage rises from 3.38 to 3.55 and has a higher variance (this is bad for PCs more randomness hurts because see above).

This doesn't seem too bad but lets assume that in an average combat the PC is targeted by 8 attacks. Now the PC has taken an expected 28.4hp rather than 27 in damage. With 6-8 combats per day, this is an additional 8.4-11.2 hp on average noting that with higher variance it could be considerably less or more. This represents the need to spend 1 or 2 more HD in short rests per day (or the equivalent in potions or healing magic).

This will definitely reduce the long-term durability of the party. How much this matters depends on how long your adventures are, that is, how many days the party has to go before they get a 2 day break and can recharge all their HD.

Not the answer you're looking for? Browse other questions tagged dnd-5e house-rules critical-hit .

19
How do we deal with my DM's house-rule about critical damage?
21
What are the consequences of removing the potential for critical hit extra damage on spell attacks?
20
If you roll a 1 on a saving throw against a damage spell, do you take extra damage?
4
Was the old version of the maiming weapon enchantment unbalanced?

12
Sword of Sharpness Critical Hit Resolution
18
Is the extra damage die from Orcish Fury affected by crits?
66
Is Greatsword superior to Greataxe?
26
Handling critical hits easily when using average damage
3
Is this critical hit damage calculation correct?
5
How does the Overkill weapon tag interact with critical hits?
16
Which is better? Improved critical or extra damage die?