How should I handle REALLY big creatures in combat?

In Pathfinder, most creatures take up no more than 30' square. However, this size doesn't really do justice to a number of larger creatures, should I want to model them. Being, frankly, exceedingly disappointed in the published quetzalcoatlus, I want to stat my own, but to do so I need to figure out how to deal with creatures significantly bigger than the baseline for 'Colossal'. Surely such a creature's controlled space should be much larger than 30'X30'!

Given that I'd like the creature to have a 60'X60' space for an aerial combat:

30x30 is not the limit for a colossal creature's space, its the standard. From there it only goes up.

If you look at the kaiju, you will see that colossal creatures are not limited to 30x30 space (only one of them is actually 30x30). There is even a kaiju that takes a 80x80 space.

The design of colossal creatures is so that if you need any larger stats, these basic rules for sizes (AC penalty, CMB bonuses, str/dex penalties, etc) are no longer a significant aspect of the creature, and instead, you should look up for (or design) abilities that reflect the creature's size. For instance, all kaiju have 40+ strength, so the size bonus on their CMB is minor compared to their overwhelming strength.

With that said, do not bother to adjust the size modifiers of colossal creatures, simply increase the stats and grant the creature abilities based on their enormous size.

Luckily for us, pathfinder has given us modifiers. If we believe that the people arrived at these modifiers using some sort of formula, we can use math to determine what size things should be. 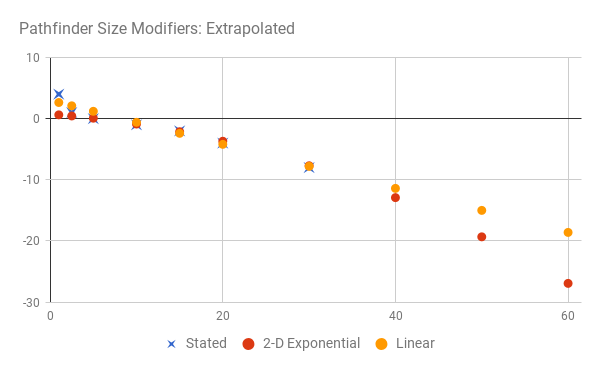 For those who are interested, the 2-d Exponential (an exponential equation of the second degree) is:

You have to round to the nearest integer, of course.

You can do roughly the same thing with the other values, but I don't encourage it. See the "easier solution" below.

The problem here is that the d20 pfsrd does not mention anything more than colossal, so whatever you choose to do with these larger sizes is a guess!

It appears the size modifier to stealth is based off of how many size categories they are from medium, multiplied by 4. So if you immediately tack on this super-colossal on the end, you get -20.

These basic rules can be used if you bother to account for things by size category, but then you need to figure out if you need a size category between colossal and this other size.

Sizes in combat are a rough approximations of how much room a creature takes up while fighting. Out of combat, creatures squeeze or spread out as needed, so the 60' wingspan may just be when it's flying.

Taking a look at Quetzalcoatlus from a few sources:

We see it has a 4-legged stance when it's not flying, which certainly reduces the horizontal area it takes up. This 4 legged stance may be it did when it wants to fight or eat something. It would be a safe assumption that dragons and other creatures would do something similar.

From the pictures, it looks like it's giraffe-sized when in a quadrupedal stance, so looking at the modifiers of a giraffe may be a good starting point. (That makes it a huge creature, and happens to agree with the given one.) The long beak could merely give it a "reach weapon" fitted for its size.

Your proposed fly speed would make anything but the largest of gaming tables ineffective at capturing the size and speed of such a creature. It may be wise to forgo showing the size of this creature on a grid until it lands.

13
How much does a large monstrous spider weigh?
3
Can a Half-Giant Soulknife manifest Mind Blades of the Large size category?
6
Size bonus from enlarge person when naturally large?
8
Where is chart for baseline physical ability scores by size?
2
Eidolon Swallow Whole Evolution
16
Can you fly over a Medium enemy creature in a 10ft tall corridor?
3
How do I calculate the damage of a Wild-Shaped Giant Squid with Powerful Shape and Strong Jaw?
1
Wield a huge weapon as a medium creature