Prior questions have established that the 5th Edition iteration of Tenser's Floating Disc can move around obstacles, but will not move (or even exert horizontal force) when it does not have a legal path to a position within 20 feet of the caster. Therefore:

Suppose an enterprising wizard were to commission the construction of a structure on an empty field. The structure consists of a spiraling ten-foot-tall wooden wall or fence, with an outer radius of 100 feet, an inner radius of 20 feet, and a distance between each loop of 5 feet, thus creating a spiral corridor 5 feet wide and about 6000 feet long. A gate is placed at the outside opening of the spiral, and ladders and bridge over the structure allow the wizard to climb up and over the spiral to easily move from the outside to the inside. 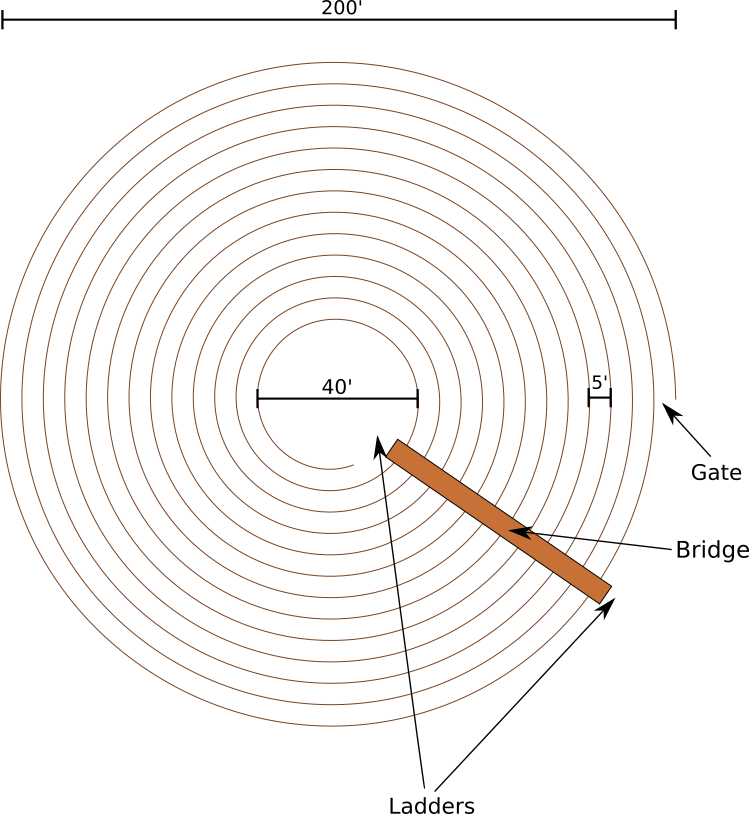 The wizard, who has no sense of right and wrong and therefore has not tested the following procedure at all, then offers any curious onlookers an exciting experience for a modest fee. The wizard casts Tenser's Floating Disk while outside the spiral and has the attendee seat themselves upon it. The wizard then climbs the ladder and traverses the bridge until they are in the center of the spiral structure. Then they signal to an assistant stationed outside the spiral wall, who opens the gate. At this point, the floating disk has a path to a space within 20 feet of the wizard which does not violate any of its movement constraints.

Does the disk move along the spiral path, and if so, how quickly?

Unfortunately, the only thing that can be said based on RAW is that it will move once the gate is opened and end up at the inside of the spiral.

It isn't explicit, but it's heavily implied that it should travel the full path. If it didn't have to, obstacles wouldn't be a problem.

The biggest contention is the speed. The spell description does not list a speed. No ruling can be made on how fast it travels unless Wizards comes out with an errata. Previous editions had speeds listed, so the exclusion had to have been deliberate. The lack of correction, with at least two sets of errata published, seems to contradict the idea that it was an oversight or accident. Ultimately, this is going to have to come down to DM fiat.

The disk moves along the path to the center. The speed at which the disk moves is undefined, but presumably at least sufficient to keep up with your average wizards ambling around at average wizard pace (since this seems to be the intent of the spell's moving at all), and possibly infinite. How fast the disk moves in your particular game and why it moves that fast is a matter of setting. As you note in comments, a fence really is sufficient-- the disk can't ascend or descend more than 10'.

This is a reasonable carnival attraction.

If I carefully craft a contraption that allows a spell to exhibit a behavior according to the RAW (Rules As Written) it will exhibit that behavior.

The unspecified details of how it exhibits that behavior are something you learn when you cast it. You try it and see. If you're lucky it behaves the same way every time you cast it. It might not. This isn't science, it's magic.

Whole adventures could be centered around penetrating the mysteries of such behavior. It may turn out that your particular copy of the spell actually achieves this effect by summoning a demon that occupies the astral plane while packing your stuff. It maybe that you're really bound to the disk with an astral tether that you had put under tension when you pulled away. It may be that the disk violently vibrates as it tries to find a path to you and bangs into things. And these may be different every time you cast it.

In short, try it and see. It may be that your DM has no sense of right and wrong either.

The lower bound on disc's maximum speed is inferable

Consider these two pieces of text from the spell description:

If you move more than 20 feet away from it, the disk follows you so that it remains within 20 feet of you.

If you move more than 100 feet from the disk (typically because it can't move around an obstacle to follow you), the spell ends.

That last condition is either the straight-line distance or the total-movement distance.

Regardless, on an open field if you are 100ft away we know the disc can always cover enough distance to keep up with you in whatever a timeframe the magic considers suitable. Otherwise it could not keep up, and we'd need to be told about it's speed to know how close it gets.

To explain why this is, imagine a combat situation where the cast has a Disc following them. They instantaneously teleport so that they are exactly, but not over 100ft from the disc. Before the turn is over, the disc must follow the caster until it is within 20ft, covering the 80ft distance in less than the time it takes for a turn, 6 seconds. Any further in one go, and the spell ends. It's possibly faster (perhaps the caster is a part time monk who breaks up their movement), but this is the upper bound on how long it can take to cover that minimum distance. That is, it can't take longer that 6 seconds to cover at least 80 ft.

From this reasoning it seems like we can assume the disc can travel at least 80ft in 6 seconds, which is roughly 14km/h or 9mph. This assumes the 100ft distance limit is because it couldn't move close the gap to 20ft 'in time' to satisfy the 'all movement is in one round' assumption we make.

Unfortunately this interpretation relies on the total-movement interpretation, i.e. that lower bound on speed adds a movement constraint. It means if the spiral corridor is more than 80ft in total length, the spell potentially ends as soon at the bridge goes away.

To see why, consider with the disc will not move if it's path is blocked, but with gate opened the disc now has an unblocked, and direct route to follow. This route takes more than 80ft of movement, placing it more than 100ft away on that path.

Either the spell ends dumping the curious onlookers on the ground, or the disc remains stationary seeing the 100ft path as 'blocked' for being too long, either way the passengers are likely wanting a refund.

If we ignore the total-movement interpretation, and instead use straight-line distance the disc must still remain within 100ft and follows you to be within 20ft of you. Now two things could happen, depending on the mood the disc is in (i.e., the DMs ruling):

Great you think, those are some dead excited onlookers (or possibly just dead), and you have their money. Win-Win.

But the issue with interpretation 2) is that as well as this not being the absolute maximum speed (there might be an arbitrary shape you could construct with longer distances, say a tightly coiled helix with just enough room for the disc to travel around and up but not over 10ft in elevation.) If the disc can travel more than 80ft in 6 seconds, then the 100ft maximum range in the spell text is not a movement constraint but a distance constraint. Plainly, we cannot argue the disc must make its movement (whether that be 80ft or 6000ft) in a fixed amount of time (despite having not way of knowing how if at all to split up the movement), and our previous reasoning about how to calculate the speed (the most it can move in a round) falls apart.

So, by my reading of the rules tex, either the disc moves at 80ft a round, or refuses to take a path more than 80ft in length if can't follow you directly. Either way limits the speed, and we've explained why the disc can't travel arbitrarily fast (if it could, the 100ft limitation becomes unusable in the calculation, rendering any method of calculating a speed moot.). Anything outside of this conclusion, and I would consider it a personal ruling for a GM.