The game was similar to Palladium or Rifts as I recall, but I remember a rule-set detailing Tech-level vs Magic-level; the higher the tech the less it affects the high magic elements, and vise versa.

It may have simply been a ruleset but I have been trying to hunt it down for literally years now.

I remember the half-dragon PC race as having wings and a breath weapon but I don't recall much more. The cyborg though, I remember being more of a gear set-up with options to replace limbs, etc. with a limit placed by how 'tech' you wish to go.

I think it was the 80s, in the UK. My recollections are mixed up with Rifts, but it's this tech vs magic that confuses things. I seem to recall Angels & Demons as PC races as well (special races like the Half-Dragon) on top of the usual elf, dwarf, orc, ogre(?) etc.... It was definately in print and I recall the pages being B&W, though I don't recall the cover. The level was PC dependent... you could have a high-magic PC & and high-tech PC face off and be unable to do much damage to each other while being lethal to magical & technological enemies respectively.

I also recall line art drawings on the pages, but no box-sets or hard covers.

Although TORG is a great suggestion (thank you Rob,) I've looked through the core source material now and there are a few points that don't resonate.

1) Having a high level in either tech or magic precluded high levels in the other. No character could have high scores in both, and it was linked to the character rather than any reality they may have been from.

2) Angel, Demon & Half-Dragon races were detailed in the source material (though I seem to recall Angels & Demons being like advanced standard races and Half-Dragons being a kind of prestige race later in the material, possibly as an example of futher possibilities.)

Everything else is similar and TORG had completely slipped my mind.

I recall the cybernetic/dragon aspects so clearly because, as a test of the rules, I recall trying to generate a Half-Dragon/Cyborg and recall having a VERY limited range of tech/magic levels to operate within to allow both race and cybernetics.

I haven't looked through some TORG sourcebooks yet, but I have a contact who's checking them for me, just in case it was a combination of rule subsets. I'm not sure the cybernetic rules were in the same book as the races.

This sounds a lot like TORG a multiverse game by West End Games where tech level and magic level varies depending on the universe you are in. It was released in 1990 and there is apparently a new version due as well.

I played the original version (as a techno-ninja) and it was a quick, fun system that ended up being a bit Dr. Who like, but that was mostly our GM's influence. 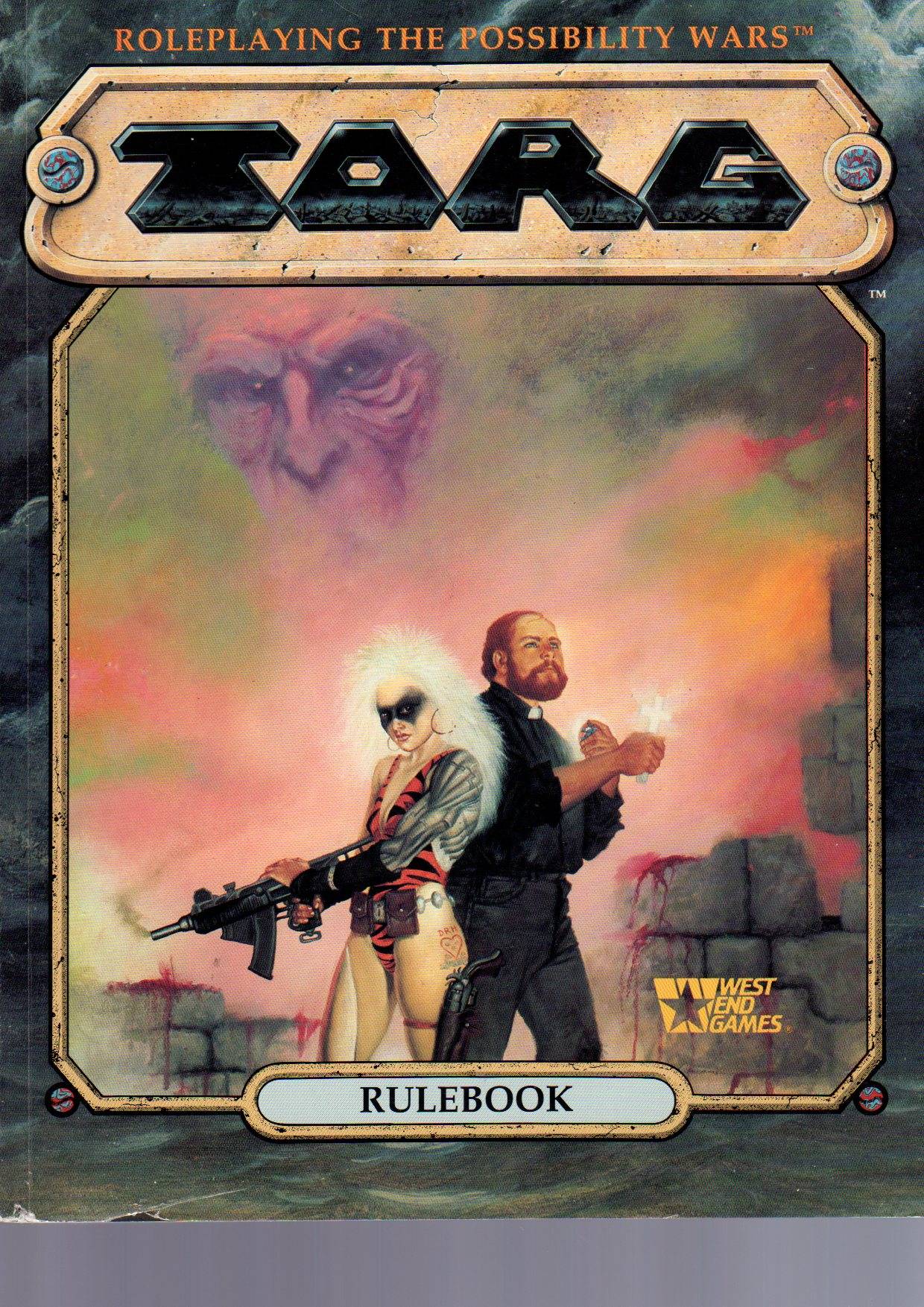 There were sourcebooks for different genre-verses.

There was a lot of scope for non-human characters; two of the sample characters are a werewolf and a lizard man. Characters had AXIOM (sort of like genre) skills that were keyed to different magical or technological levels, so a magical ability (Shapeshift) didn't work as well in a technological environment. A winged dragon is easily possible within the TORG game framework, there was a specific fantasy sourcebook which included options for fantasy races in that world.

Not the answer you're looking for? Browse other questions tagged magic product-identification dragons cyberware .

22
What is this mature RPG System I saw online a few years ago?
21
What was this Magic the Gathering RPG I remember?
5
What is the name of the book describing a prestige-class called 'Hawk' (I think)?
9
Trying to remember a modern monster-hunter RPG that I played in in the 1992-1998 timeframe
15
System (single manual) "Advanced Roleplaying"
7
Name of a roleplaying supplement, 80s, D20 system, heavy on Alchemy?
5
What book had Rituals to "upgrade" animal companions to keep them viable at higher levels?
49
Which Article Helped Get Rid of Technobabble in RPGs?
13
Does anyone know the name of this RPG featuring possessed villagers in the Yorkshire Dales ca. 1980's?