Snakeskin Tunic: A snakeskin tunic is a tight, form-fitting shirt crafted from the scales of a giant snake. When worn, it grants a +1 armor bonus to AC, a +2 enhancement bonus to Dexterity, and a +2 resistance bonus on saving throws against poison.

Mithral Shirt: This extremely light chain shirt is made of very fine mithral links. The armor has an arcane spell failure chance of 10%, a maximum Dexterity bonus of +6, and no armor check penalty. It is considered light armor.

Armor bonus no, other effects yes.

Armor bonuses to AC do not stack.

And as listed in equipment:

As for the other bonuses and effects of the two items, as they are items in different slots (armor slot and chest slot, respectively) with different bonuses they should stack just fine, since, unlike Bracers of Armor, Snakeskin Tunic does not have a clause that turns off its other abilities when another armor bonus takes precedence.

Many magic items need to be donned by a character who wants to employ them or benefit from their abilities. It’s possible for a creature with a humanoid-shaped body to wear as many as 15 magic items at the same time. However, each of those items must be worn on (or over) a particular part of the body, known as a “slot.”

A humanoid-shaped body can be decked out in magic gear consisting of one item from each of the following groups, keyed to which slot on the body the item is worn.

Of course, a character may carry or possess as many items of the same type as he wishes. However, additional items beyond those in the slots listed above have no effect.

The effects do not stack, they overlap.

If the tunic provided (say) a +1 Natural Armor bonus to AC, it would stack with the Mithral Shirt.

Two armor bonuses does not stack, everything else will

Bonuses with the same name or from the same source do not stack, as explained on the glossary:

Bonuses are numerical values that are added to checks and statistical scores. Most bonuses have a type, and as a general rule, bonuses of the same type are not cumulative (do not “stack”)—only the greater bonus granted applies.

The important aspect of bonus types is that two bonuses of the same type don’t generally stack. With the exception of dodge bonuses, most circumstance bonuses, and racial bonuses, only the better bonus of a given type works. Bonuses without a type always stack, unless they are from the same source. 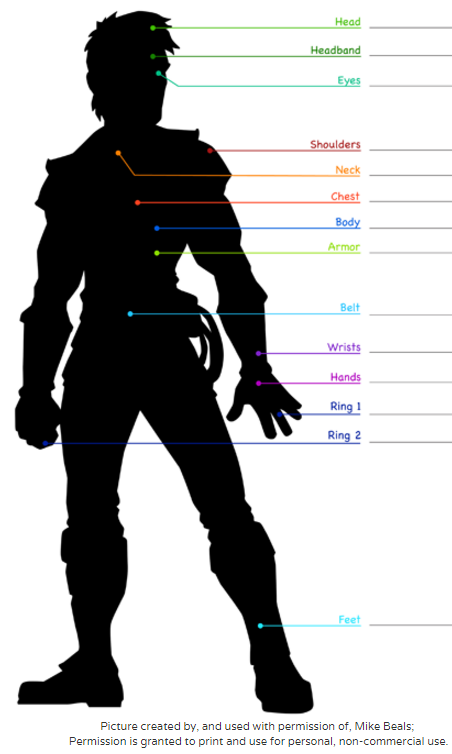 Each slot can only gain the benefits of a single magic item, but your character will benefit from all magic items from all those slots at once, assuming the other rules are respected (like stacking bonuses).

In other words, your character will gain the benefit of both magic items (except for the armor bonus).

Not the answer you're looking for? Browse other questions tagged pathfinder-1e armor stacking .

-7
Can a character wear both chain mail and leather armor to get a higher AC?

2
Paladin archer looking to combat optimize my 9th level choices
8
Can a druid wear Elven Chain?
15
Can you wear a robe over armor?
8
Where is chart for baseline physical ability scores by size?
9
Why would I buy Darkleaf Hide armor instead of a Mithril Chain Shirt?
1
Do Greater Angelic Aspect, Legendary Proportions, and Transformation stack?
1
If a spellcaster can wear light armor without suffering ASF, how does mithral medium armor work?
4
Can you wear armor over an Aegis Astral Skin?