Need a way to catch "Knucklehead Trout" from Icewind Dale

Background: I am running a 3.5 "rules-lite" version of the published adventure "Legacy of the Crystal Shard" for my son. While it is "rules-lite" I try to run as close to RAW as possible.

My player has decided that since these fish are so valuable, he would like to attempt to catch one/many himself. Due to the information provided in the book, it does not appear a simple "survival skill check" will suffice to catch these things. However, he does have a character with a high survival skill and I believe it would break the spirit of the game to simply tell him "no". I am searching for a way to give him the opportunity to try.

The setting stipulates that:

"Fishing for Knucklehead Trout is very dangerous and requires cooperation."

Also, while not explicitly required, all the fishers in the region use boats to catch these fish, while my player plans to fish from the shore. The only "stat" the book gives us on the Trout themselves is they grow "up to" 5'.

My Thoughts so far:

While the book does say it is "dangerous", everything an adventurer does is "dangerous" and they are much more skilled than simple "commoners" or even low-level experts, so the level of danger and skill accomplished by many of them should/could be doable by an adventurer.

Why a statblock for a fish? Since the module stipulates this is a dangerous endeavor I need to know how/why it's dangerous. I can assume the main dangers arise from the Strength of the fish pulling the fishers in (bullrush/modified grapple?) and possibly attacking/eating/drowning them.

Informed player that normal fishing gear is inadequate for this endeavor. He plans to buy:

These prices seem to be simultaneously too high & too low. Too high because the commoners could never afford them (resolved by NPCs using other methods) but too low specifically for the fishing pole because there is no wood like I've described in D&D that is able to bend so far without breaking without some type of magic).

So followup question: Do these requirements/prices seem right/fair? Is there another item/substance that would better fit?

Final note, I really struggled with getting this question properly worded while also keeping it "on-topic" SE rules wise. If it seems like there's too much info this is why.

I couldn't find anything in 3.5, but Volo's Guide to the North says knucklehead trout have fist-sized skulls, and in the Icewind Dale video game they both say that the trout are "enormous" and give them an item weight of 1 lb.

Given that, it may be better to base your answers on real trout. One of the most widespread varieties of trout, the brown trout, has on average a "fist-sized" head and a top weight of more than 40 pounds, making it potentially larger than most salmon. Personal experience says that attempting to catch a full-sized salmon with a trout pole is a great way to ruin your trout pole, so you're correct in saying a typical pole wouldn't work and people would commonly use boats (and nets) to haul them in- if they're using set nets, for example, they could manage with two or three people per rowboat, which would explain the need for cooperation. I believe the setup you have is a little overkill, but then, an average size "knucklehead", if treated as a brown trout made out of ivory as a gross simplification, would be worth about 50 gold pieces. Your son will probably earn his money back.

It would also be dangerous, not because of the animal itself, but because of the working conditions. Icewind Dale is never far over freezing, and the lakes even less so- falling into such water is a quick way to die of hypothermia. For that, you can use the rules for cold exposure, though a quick and dirty way of dealing with it is to make any unlucky fellow who goes into the drink due to poor balance, bad weather, or horrible luck make a Con save to avoid going into shock, with a new save for every minute that they don't dry off.

All that said, when I started researching this question the first picture I pulled up for a knucklehead trout had it looking like a man-sized shark. If you'd rather make fishing a combat encounter, use a Medium shark with maybe an extra point of AC or a slam attack to represent their thick skull.

As a final note, remember that just because the fish itself is large doesn't mean the useable amount of ivory will be. It's entirely possible that your shark-trout is only good for a 1-pound, fist-sized chunk of solid ivory, as the rest is filled with air holes and such, making it too fragile to work. Two or three commoners working to pull a few of those fellows in on a net would be dangerous, and earn them maybe a gold piece a day each... plus as much trout as they could eat. A good living for a commoner, but not for the likes of adventurers.

I made some mistakes & miscalculations in the original question. I have left them that way as it's cleaner to address them in this answer.

Thanks to the input from comments & @TheVagrantDog's answer this is how I think best works for this situation. I'm putting it here in case some other DM may find any of this info useful.

This post is broken into 4 parts: Equipment & Prices, Explanation of how I came to those prices, Fishing Encounter Challenge, Knucklehead Trout Stat-block.

(Prices & explanation listed in section below for ease of reading):

The Campaign Guide specifically mentions “Mithril” hooks being available to buy but lists no price for them, it makes no mention of hooks made from Adamantine or other materials. (In the question I originally stated Adamantine because it was stronger than mithril & it was easier to price by comparing a hook to “ammunition”)

Since the book does not give a price we go to the source (DMG) and use some math. The DMG prices “other items” made of Mithril at +500gp/lb. Great, how much does a fishhook weigh? There are countless sizes/styles of hooks, since these are “big fish” I looked up hooks on the upper end of the scale and on average they weight between 1.5-2oz. For simplicity sake, we'll take 2oz as the base weight and then divide by 1/2 (Mithril items weigh half as normal) leaving us 1oz. Since 16oz=1lb we divide 500GP/16oz to discover Mithril costs 31.25GP/oz. For ease of use, rounding to 1 Mithril hook costs 30GP. (If another DM chooses to say they weigh less that's perfectly acceptable, since the formula is done for you just plug in your new #s)

The Campaign Guide specifically mentions poles made of “Elven Yew” (Yew is a coniferous tree so climate appropriate & they were commonly used to make bows). Again, no price is given nor any guidance to follow like we did for the hooks so we can compare it to what exists and use our best judgement. This could be compared to either a 10' pole or a quarterstaff (both too large with no bend & the 10' pole is too heavy) but a better bet would probably be an “artisan tool” (5GP). Being made of special material I would consider it a “Masterwork tool” (50GP) with an option of adding a special material cost similar to Darkwood (10gp/lb). In the block above, this is what I did. I took the Masterwork Tool, assumed it weighed ½ as much as a Quarterstaff (4lbs) & added 20GP. Still a bit pricey but not too overkill & looks like a good middle ground approach)

Officially, nothing like this exists. The closest item is Silk Rope which is 10GP for 50' but “rope” is too thick for our purposes so I've decided to stick with the “Fishing Line” as identified in the original question. For other DMs who think it's too much, you can consider the line as being part of the fishing pole, I just disagree for this circumstance due to the size & strength of the fish.

As Hey I Can Chan pointed out, a rowboat is only 50GP, (Oars are an additional 2GP/ea). It might be difficult to manage if you land a large catch but you're more likely to catch something in the deeper water than on the shore.

After much “Google-fu” I was unable to find a “fishing encounter” (there are some but not what we're after here) that was equivalent to what we have here. With that, I borrowed some ideas and ended up with this. (Fair warning, depending on your PC's stats & their rolls, this could be a LONG encounter)

Below is the Stat Block I created for the Knucklehead Trout. These numbers were gathered by comparing to the shark & porpoise entries and adjusting to fit. While most likely the adventurers will not be “fighting” a fish, all stats are provided because you just never know what your players will do... 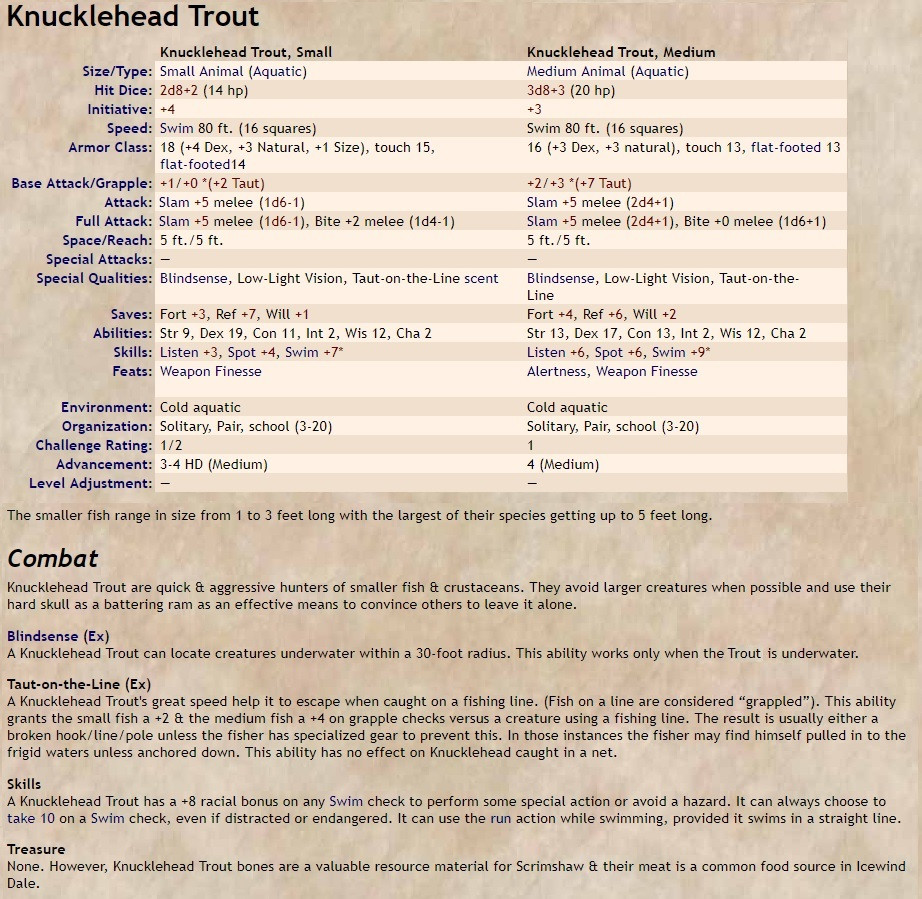 Not the answer you're looking for? Browse other questions tagged dnd-3.5e skills published-adventures or ask your own question.

6
What is the DC for Crafting an arrow?
19
Do I lose access to a feat if ability drain results in no longer meeting the prerequisite?
1
Can you save skill points for later levels?
15
Have either of the Icewind Dale video games been published as d20-compatible adventures?
6
List of Additional Uses for Skills
2
How do I adjust an adventure for a much larger group?
6
In a wilderness campaign, are unusual mounts free?
4
How can this in-combat healing specialist best spend their remaining levels and feats?