Do two non-touching walls in the same area, considered to be overlaping areas of effect? 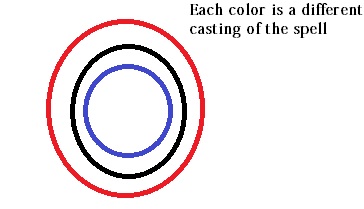 A spellcaster cannot maintain concentration on more than one spell at a time, so we're going to answer this question assuming there are multiple casters.

To start, we'll look at wind wall as an example spell, then see if we can apply any lessons learned more generally. In this spell, we can create a wall up to 15 feet high, 50 feet long, and one foot thick, in any configuration, so long as it makes a single continuous path along the ground. If we made a circle with an internal diameter of 5 feet, we'd fall well within those guidelines. Anything passing through the 1-foot thick wall would be within its area of effect.

Does this rule apply to all walls made via spell? It certainly would hold true for wall of thorns, wall of stone, wall of ice, and wall of force, though for several you would have to shape a square rather than a circle, and the sizes would depend on the thickness of the wall created. Wall of fire is a special case, as its area of effect extends beyond the wall itself. In that one instance, the areas of effect would overlap, and even then only if both walls were facing the same direction. In that instance the previously discussed ruling applies.

18
Can two mages cast Wall of Fire in the same place?

21
How does the area of effect of a fireball cast in a corridor or small room work?
18
Can two mages cast Wall of Fire in the same place?
5
Does a person under the effect of Astral Projection count as on a different plane for another caster on the same plane as their physical body?
13
Do creatures in an area of heavy obscurement created by a spell know the contours of the spell's area of effect?
15
If you cast a spell with different effect options twice on the same creature, do multiple castings of the spell stack?
17
What are the limitations to using the Shape Water cantrip for cheating and forgery?
5
Does the Silent Image spell require the caster to actually have visual contact with the area they want to place the effect on?
8
Are the spells Leomund's Tiny Hut and Tiny Hut considered the same spell for the purposes of combining magical effects?