About the Cosmology of Mage the Ascension

I've been trying to make sense of the Tapestry's structure in Mage the Ascension as described in the 20th anniversary edition, but there some points I'm not sure I understood correctly.

So, if I get it right, the three Umbrae (High, Middle and Low Umbra) and the Near Umbra are some sort of "different dimensions", like parallel planes of some kind. On the other hand, the Deep Umbra and the Horizons are in "our plane plane of existence", as the book describes the First Horizon being located at the end of Earth's atmosphere and Far Horizon at the asteroid's belt after Pluto. Everything beyond that is the Deep Umbra, and Zones like the Digital Web are limited areas with certain characteristics spread throughout our plane and the Umbrae. There is a nice pic I found online displaying the whole thing: 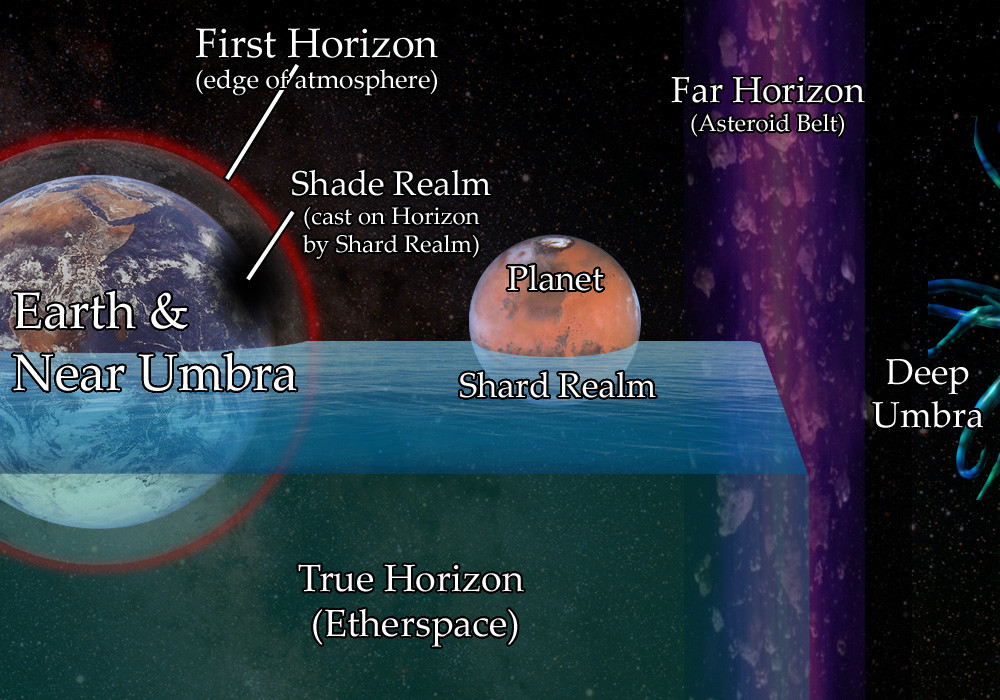 On the other hand,the book also states that Horizon is the region that separates the three Umbrae from one another, and that's where it starts getting confusing for me. So either my interpretation of the three Umbrae Realms as parallel planes is wrong or Horizon isn't exactly a physical region in our solar system. Is Horizon both in "this dimension" and in the other Umbrae, in way it intersects all of them? How do you interpret all this?

I guess this is all probably meant to be confusing, as many other things in the World of Darkness, but I would like to know what is your take in all this.

That image you're using is one I created for the Unofficial White Wolf Wiki. I founded the Wiki, work for the current publishers of Mage, and 2001's Guide to the Traditions was my first RPG credit. I've been steeped in Mage lore for a very long time.

Earlier books use "Horizon" a little liberally and inconsistently. I'm pretty sure it wasn't until Revised Edition (2000) that it was formalized into "First Horizon," "True Horizon" and "Far Horizon" as three separate areas. They do not, however, occupy our physical reality (although the Gauntlet is thin enough in space that finding your way into the Horizon is pretty easy). The Horizon is the "Umbra" of space and is usually reached the same way. The Far Horizon is in the Asteroid Belt between Mars and Jupiter, not the Kuiper Belt. The four gas giants and Pluto are technically in the Deep Umbra rather than in Etherspace.

I can't recall any references to the Horizon being what separates the three Near Umbrae. Each of the Horizons is outside the Near Umbra system.

Not the answer you're looking for? Browse other questions tagged world-of-darkness mage-the-ascension cosmology umbra or ask your own question.

9
What are the most important features of Umbral Horizons?

17
Running Mage the Ascension with new players who are intrested in the Entropy Sphere
9
What breaks using nWoD rules with classic WoD cosmology?
3
World Axis Cosmology
9
What are the most important features of Umbral Horizons?
8
What happens when a mage rolls a botch during magick?
19
What is the minimum essential reading for a new Mage: The Ascension player?
37
Is there any documented proof of Mage: The Ascension writer intoxication?
11
How can a mage implement a hammerspace?
14
How to Even Begin Understanding the Underworld's Geography/Cosmology?