Can you cast spells through water?

The PHB says normally you need "a clear path to the target" to target someone with a spell (see "Spellcasting", page 204). Jeremy Crawford confirmed, that you can't cast a spell through semi transparent things.

Water is quite "semi-transparent" for me. Can I normally cast a spell through water? For clarity, let's say the spell is Guiding bolt, I can see the target, and the situation is one of the following:

The answer you linked has also quoted Mearls tweeting that:

in general, a barrier that stops physical objects stops spells

Based on this I would say that water does not stop objects and thus would not stop spells either. Of note is that it also does not provide any cover (no such thing is mentioned in the section for underwater combat, PHB p.198).

You have to keep in mind though that forming the verbal component of a spell might be challenging if you cannot breathe underwater.

The rules don't state that water, by itself, blocks spells

I would expect that if this was the general rule, or something specific to underwater combat, it would have been so stated in the rules. If you can see the target you meet the condition to cast the spell. Cover (see the rules on cover in the PHB) may or may not apply to a given situation. You'd need total cover to be prevented from casting the spell.

Underwater the following rules apply. When making a melee weapon attack, a creature that doesn’t have a swimming speed (either natural or granted by magic) has disadvantage on the attack roll unless the weapon is a dagger, javelin, shortsword, spear, or trident. A ranged weapon attack automatically misses a target beyond the weapon’s normal range. Even against a target within normal range, the attack roll has disadvantage unless the weapon is a crossbow, a net, or a weapon that is thrown like a javelin (including a spear, trident, or dart).
Creatures and objects that are fully immersed in water have resistance to fire damage.

Those are the specific rules to various limitations in underwater combat. Each situation where one casts a spell underwater will need to be considered depending upon whether or not the somatic, verbal, and physical components can be applied.

Let's get down to cases

I'd expect a caster to use a water breathing or similar spell (or item) to engage in underwater combat. For someone lacking that, the issue of whether or not the verbal component works looks like a situational ruling. This tweet from Jeremy Crawford explicitly states that being underwater doesn't interfere with spellcasting. There is no conditional "Yes, if they can breathe underwater." That said, the official Sage Advice rulings compendium doesn't mention underwater combat.

Water Breathing(SRD p. 191 spell description)
This spell grants up to ten willing creatures you can see within range the ability to breathe underwater until the spell ends. Affected creatures also retain their normal mode of respiration.

FWIW, @Slagmoth makes an interesting point about underwater spell casting in this comment:

The linked answer {in the question} would indicate Sahuagin and Marids not being able to cast spells in their native environment though, which I am certain is not intended.

Only solid or fully opaque mediums can block spellcasting.

One ballpoint method of knowing if spellcasting can be done is:

The above applies to:
* The spell's range is not 0, self or touch.
* The spell description states a target "that you can see"

It doesn't matter if the attack would be made at disadvantage or the range of the weapon was impaired.

One thing a DM can rule is to greatly reduce visibility ranges underwater, to emulate murkyness and the water effects on light. 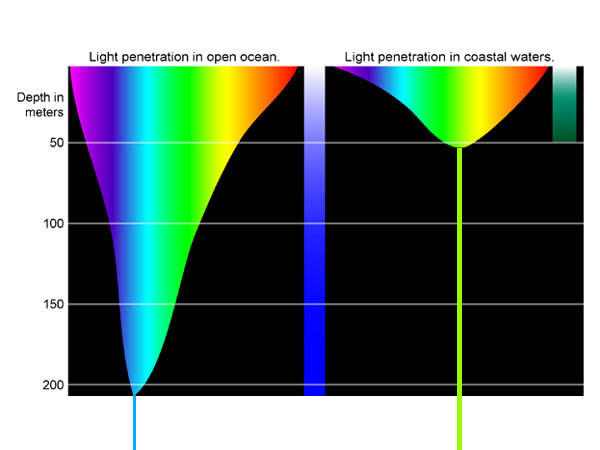 For a crystal clear deep ocean, sunlight only penetrates 200m/650ft. On coastal waters, it is up to 50m/160ft. The first half of this range is where humans can see without penalty, the remaining range is low-light. Beyond that is pitch darkness.

I won't attempt to state how much light sources should reduce by. It depends on each DM's ruling.

51
Can spells with a verbal component be cast underwater if the caster can't breathe water?
32
What happens when you cast the Fireball spell underwater?
29
Can a spell be cast through (semi) transparent things?
3
Can I cast a spell on the other side of wall of fire?
1
Is it possible to cast spells underwater if I am amphibious?

24
Do you need line of sight to cast spells on someone?
12
Does Water Walk include ice as a terrain it affects?
21
Is it possible to combo the spells Create and Destroy Water, Shape Water, and Lightning Bolt in order to make LB more powerful?
6
What happens if I cast Otiluke's Freezing Sphere while entirely submerged in water?
9
Can you cast spells through a teleportation circle?
10
Do Gaze Effects work through a Wall of Force?
4
Can a UA Lore Mastery wizard use the Spell Secrets or Alchemical Casting features to modify spells cast through wands or staffs?
11
Can the Guiding Bolt spell be aimed at an invisible target?
6
Can a multiclassed artificer/rogue use Sneak Attack with spells that use a ranged weapon as a spellcasting focus?