The Most Charismatic Man in the World 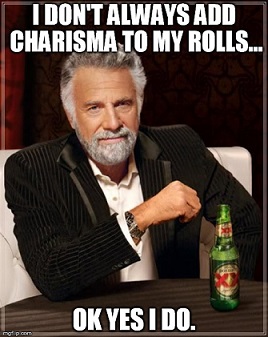 OK, so the title might be slightly deceptive. This is an optimization question about charisma, but the goal is not to have the highest charisma possible (though builds should definitely crank charisma). Instead the goal is to make an effective character who is as SAD (single attribute dependent) as possible, focusing on charisma.

What I Have So Far:

But where can I go from there?

Usually SAD builds on a mental attribute work well with pure casters (with Charisma you can get Sorcerer or Oracle), so the DD of your spell can go very high. The downside is that it doesn't work so well with multiclassing (with a 2 levels dip in Paladin you get your spells two levels later). Also note that getting your Charisma to damages is quite useless for a pure caster.

There is no way that I know of to directly get the real effect of Divine Grace without being a Paladin (or Antipaladin). There was a feat (Divine Protection), but it has been nerfed to oblivion. However the Oracle of Nature can get Friend to the Animals as a revelation:

Add all summon nature’s ally spells to your spell list. You must still select these spells using your allotment of spells known. Animals within 30 feet of you receive a bonus on all saving throws equal to your Charisma modifier

So if you manage somehow to be an animal you won't need to be a Paladin. I guess you can find 3rd-party races that are animals, but I don't know any of them.

You can get your Charisma to hp by becoming an undead (like a Lich). I doubt your GM will let you be one at character's creation unless you take an undead third party race.

No way that I know of to replace Intelligence for skill points by level. The best way to do skills with only charisma is the bard's Artistic Versatility, but it doesn't worth the dip if you don't intend to invest more in the class.

Divine Techniques from Divine Anthology (like Way of the Shooting Star) doesn't ask you to be of the same alignment as your deity to be used, just that you worship her, so you don't need to be chaotic good.

Leadership is a very powerful feat, and it becomes even more powerful if you have high Charisma.

Example of a build that works: Paladin(2)/Oracle of nature(5)

Traits: Magical Knack(makes the multi-classing more efficient) + one fluff thing of your choice

Role: Take a heavy armor, a shield and a starknife and ride your boar to battle! You two are practically immune to magic with your saves and have a high AC because of your armor and Nature’s Whispers. You don't deal as much damage as martial characters, so don't hesitate to spend actions to heal fallen ones, but otherwise you should better keep your spells for pre-fight buffing, post-fight healing, or in-fight invocation of natural allies. At the same time your cohort can do cohort stuff that will highly depend on what your GM will let her do. Outside of combat you are the group's face. You smile and look pretty and let others do the stealthy investigations.

So long as you don't need to make more than a seven or eight saving throws per day, a single level of the Unchained Monk archetype Invested Regent is an excellent substitute for two levels of Paladin. Most of the rest of the build can be Warpriest, and between Fervor swift-buffing and the DEX+WIS stacking of monk, AC will be pretty decent (especially with Dangerously Curious trait to UMD long-lasting Mage Armor). And your belt slot isn't devoted to dexterity, so strap on a Blinkback Belt. Trash a minor blessing to place Shooting Star into its slot rather than a feat slot. You'll want Crusader's Flurry and Quick Draw by 5th.

Not the answer you're looking for? Browse other questions tagged pathfinder-1e character-creation optimization ability-scores or ask your own question.

0
What to do with a Lizardfolk with high Str/Con/Cha?
0
Weapons/Means for touch attacks
5
Is my feat chain for TWF Slayer Tank optimized?
2
Are you able to use the same Ability Score as a Source and Bonus?
3
Help with a Metal Oracle build
2
How to make charisma mod replace as many values as possible
9
What is the most damage that can be done in a single melee attack without features that double damage?