Are anti-personnel catapults used in LARPs?

In a previous question I saw that cannons do exist in the world of larping, used against gates and castles but not against people.

Are there things like catapults that target people instead of gates and castles used in LARPs?

I am currently in college and this is my first time larping. My group thought it would be fun to have some catapult-like construction to use during large scale events.

However, you must of course check with the specific rule set of the organisers of any event you're attending - or when in doubt contact them directly!

Example: Conquest of Mythodea has explicit rules on how such siege weapons have to be constructed, operated, and how they are checked by the game masters. While there I saw probably some 10 different designs with varying degrees of range and efficiency.

You can download the English rule set for CoM here: https://www.live-adventure.de/en/larp/rules-set

Here are some examples that I was able to google: 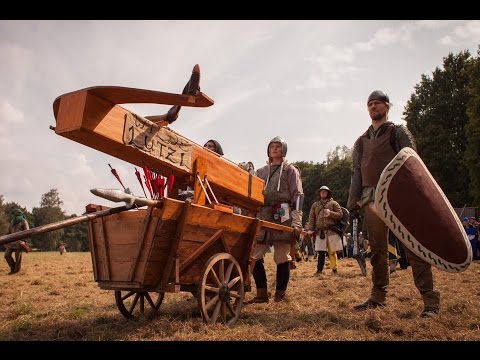 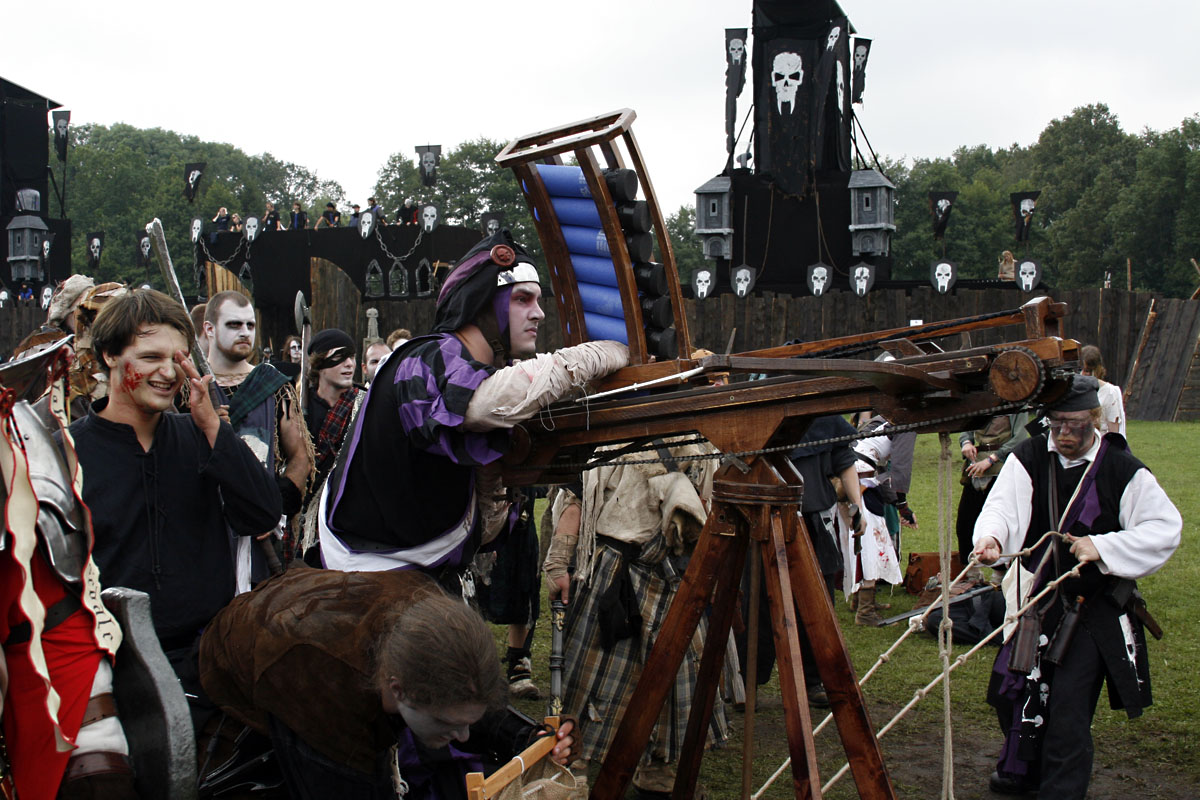 There are also bigger ones, but I couldn't quickly find pictures for them.

In addition, the LARP I am co-organising allows siege weapons since many years. In the anti-personnel variety we so far had: trebuchet, torsion-catapult, ballista (sadly no pictures available online).

A note on their effectiveness

The siege weapons I have seen so far were almost all of them not very useful in terms of combat effectiveness: they are slow, heavy, slow to reload, have poor accuracy and often comparable (or even less) range than normal LARP bows / crossbows.

They are however a lot of fun and make a big difference in terms of the atmosphere of your siege battles. :)

There are ways to work around some the above issues but it will mean to spend a fair amount of time on coming up with a reliable, useful, safe design.

I'm going to answer this based on what I've seen done in a boffer style LARP I participate in. Please note that this answer is not necessarily applicable to your LARP, but can be used as a means and method answer, which may be useful to either you personally or the LARP you participate in as a whole.

Heavy weapons in our game have a few uses: They may be the only means to hurt a giant creature, their projectiles includes in-game effects that make them effective against reinforced objects, they can be used to target other players. Regardless of what they are being used for, their construction and operation is the same.

Construction is handled by creating an in-game phys rep for the weapon. Whether a ballista, catapult, or heavy machine gun, the phys rep needs to approximate what is being represented. There should be no sharp corners and padding should be used wherever appropriate to protect both the phys rep and other players. Wood and other hard materials may be used, but the weapon's functionality should be pretty limited (moving parts create pinch points or may break easily). Limit your size to what you (or a small group) can practically carry, especially if your LARP uses magic to create in-game items; a full size catapult looks cool, but you can't move it so you can't actually use it.

In-game operation of the weapon requires players to function as a crew utilizing in-game skills necessary to set the weapon and operate it. Attacks are made by a single player on the crew who throws a projectile (foam ball, packet, etc) to represent attacks made with the weapon.

A drawback to the above operation method is that you're generally limited to one hit per attack. Alternate means of attacking can include out-of-game (OOG) operators, who can represent massive and unblockable attacks. A player wearing OOG garb roleplays the travel path of the weapon and just barrels through characters, potentially scoring multiple hits. Thus a massive boulder could be hurled through players, hitting several. If the resources are available, the OOG operator can carry a tarp to lay down where they stop and thus represent newly created difficult terrain via a massive boulder.

Catapults exist and are used

But they make awful anti-personnel weapons

Their ranges are very limited

In my country (Russian Federation), catapults are usually given very strong stats. They usually take down anyone with a direct hit, they take down castles quite quickly. But safety guidelines make ranges very small, catapults are extremely inaccurate, and, even with a successful hit, you are only taking down one person.

Anti-personnel weapons should be more easily aimed than a catapult. Consider ballistae (giant crossbows) or cannons. I have personally used a cannon, read below about its limitations.

Siege weaponry is clumsy to transport

Your catapult or whatever mechanism of choice will take a lot of space in your car. When the even starts, it will greatly slow you down on a march and make you unable to escape any enemies without leaving the siege weapon behind: for example, if you meet a monster that you can't beat or a warband that you don't want to engage. You will just get tired of dragging a heavy thing all day long unless you have a lot of people to drag it.

Theoretically, you can use a catapult to fire over a wall, but that's not practical unless you can accurately measure distances and have a spotter helping you to adjust your fire. I haven't seen it done successfully yet.

Siege weapons can be used in large-scale battles, but limited ranges take away all the fun. You can easily get charged before you are given a chance to fire, often requiring special rules to be developed so that the said weapons can be at least somewhat effective. For example, Warhammer LARP in 2018 gave the shooters 3 minutes to safely fire at the enemy formation before the infantry was allowed to even start moving.

Some things are better killed with siege mechanisms

On the other hand, siege weapons are very effective at taking down castle gates: that's what they were usually used historically for. In my area, catapults usually deal a lot more damage against city gates, which means less time spent firing after you establish your aim. If you plan to be a part of a large army and besiege castles, you will need siege weapons, and a catapult may be your weapon of choice.

Some monsters (e.g. Warhammer Stormvermin) are most easily taken down with siege weapons when magic is not available.

So don't bother if it's your first LARP

As you can see, catapults and the like are very niche weapons. They are good at taking down something that can't move while you are covered by friendly infantry. They are very bed at firing at anything moving fast.

If it's your first time, relax and better be a roaming party seeking for adventures. If you plan for something too niche and it doesn't work, you will be greatly disappointed.

Only bother taking them to an event if you know what you are doing and plan to besiege someone or to fight monsters who can only be taken down by siege weaponry.

I've seen one used in a reconstruction ran by my little brother and his schoolmates when they were around 7 years old. Technically it was larp, even if nothing close to the realism of what you probably though when writing you question.

The catapult was shooting small blocks of polystyrene painted in black of about 10cm×10cm×10cm. I don't remember at all how it worked though.

Not the answer you're looking for? Browse other questions tagged larp props prop-construction physical-safety or ask your own question.

9
How can large weapons be used in a small forest?
11
LARP: Group psychology in antagonistic player groups
9
What is the most widely used safety standard for larp weapons?
11
Are Polypropylene training weapons safe for LARP?
37
How do I get my players' LARP characters to not be a bunch of murderous cretins?
24
Social contract for flirting at LARPs