In terms of imagining the fiction in-game, how does a character survive being impaled by spikes in a spiked pit trap?

Spiked Pit Traps are a classic dungeon trap in fantasy. Like most traps in D&D, they simply do a set amount of damage that can be survived. It is assumed that if the character does survive the damage, they can simply climb back out (perhaps with the help of their allies and some rope) and continue on their way, making it a one-and-done kind of situation.

However, I find it difficult to imagine how someone would actually survive such an impaling regardless of damage rolls. The realism and believably fails for me. I see it as following a similar principle to The Chunky Salsa Rule - the character would be perforated so completely that there is no way to envision their survival.

In a spike trap with sufficiently dense amounts of spikes: 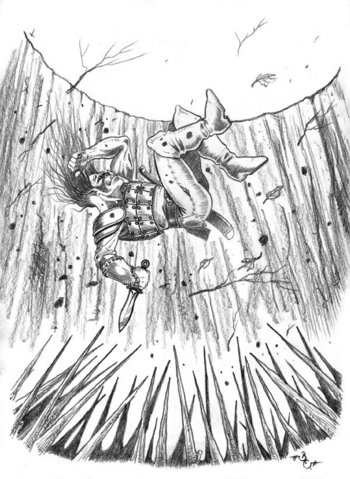 In real life, such a trap would almost certainly have a 100% fatality rate. It is simply not possible to survive beyond some quantum-mechanical miracle. Even then, actual miracles in D&D might still not save you - you couldn't plausibly be healed while you're still full of spikes.

How do I deal with characters surviving such spike traps in terms of the narrative? How do I describe such an event in the story? Is it even possible to make believable? Should the Chunky Salsa Rule be applied such that such traps simply insta-kill instead?

This is a bit of a tricky one, and one of the reasons why I (personally) dislike hit points. Regardless of my personal feelings, it's how things are. So how do people survive spiked pit traps?

The real-world truth is that unless the character hits these spikes directly, at the perfect angle, they will bend some. As the character drops, they are initially impaled, but the moment (or "torque") they exert on the spikes cause the spikes to bend and to potentially break. A non-symmetric point on the spikes will also contribute to bending one way or another.

Additionally, any armor they are wearing (this is especially true of plate, chain, and shields) will deflect the spikes further, causing them to snap sooner.

So the character falls, the armor deflects most spikes, so the character gets a little impaled, but then the spikes break, preventing further damage.

Hit points are an abstract way of telling you if your character is still able to act, it reflects your stamina, your ability to dodge attacks and what you might be searching for here is... the character's LUCK.

If a PC "fell" in a spiked pit, but wasn't reduced to 0 HP, it means he was able to grab a ledge and avoid falling for his death, but he might not get so lucky next time, hence his reduction to his Hit points.

But if he was reduced to 0 hitpoints, then he did fell on the spikes and I think it's reasonable to say that he was impalled to death.

Not the answer you're looking for? Browse other questions tagged dnd-3.5e damage traps or ask your own question.

27
How do I telegraph that an encounter that was too difficult before is now achievable?
13
Combat without HP
2
Does a blind character get a reflex save?
4
Can a sleeping creature make a reflex save?

27
Traps specifically for Smart characters
12
Can anyone search for traps?
44
Resources for Complex Puzzle-Traps
2
Break through leaking hit point abstraction
6
How to get out of a pit?
3
Limits of Unseen Engineers
21
How to make traps and puzzles more engaging?
14
Do traps deal weapon damage?
20
Should a DM award XP for avoiding or surviving traps?