How do I role-play as a dragon? [closed]

I have an NPC in our game that is called a "drake," but in terms familiar to most of you, he would probably be considered to be a dragon. In our game, drakes are classified based on the plane that they belong to, but he belongs to the natural world (Tyrra).

What should I keep in mind when playing him? Should I change my voice? Should I be pushy or kind? And so on. My goal is to make this character come across as a convincing dragon, even without the makeup, costuming, and stat card behind him.

The game that I am playing is Live Action, so advice about how to move, how to stand, etc., would be appreciated as well.

I will base my answer on how dragons are depicted in Dungeons and Dragons, and also other RPG's and movies and books.

You should have a checklist of certain things that will identify you as a dragon, in character. These are, in no particular order:

These are but a few guidelines on how the mediums view the dragons, and how Dungeons and Dragons (specifically 3.5 ed) has documented them. These are what all dragons have in common, no matter the alignment, habitat or medium of appearance. (movies, RPGS, so on). I do not talk about how they view the world, what sayings they use and such things, as they vary from dragon to dragon.

If ever I were to roleplay a dragon, I think I would base it off of Sean Connery's Draco from Dragon Heart (1996): sometimes humorous, kind, brave, giving, noble, etc..

Out of all the dragons I've encountered (read as "not many"), he is definitely the most memorable.

I'd say, that depends: What character is he?

Build his appearance and actions around that character. After all, first it's your character, on second it's a dragon. We all do think differently about dragons, as mentioned by rishimaharaj, that's also my favorite version, but f.e. I have the version of the dragons from Drakensang (The Dark Eye) in my head, those were a lot more animals.

I think what we all expect from a dragon is:

No matter if he is good or bad, you'd expect those properties from a dragon. So, yes, altering your voice would be a very good thing, but how would depend on the character itself. 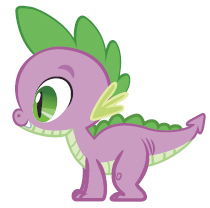 Despite the nature of the show, there are a number of useful lessons we can learn from it, especially with characterization. Humans naturally anthropomorphize our conceptions of other creatures. We do so, because it's really difficult and not particularly interesting to try to understand aliens who are fundamentally alien.

Therefore, there is no point to, and negative utility from, trying to conceptualize an "alien" drake by virtue of its race or inherent attributes. However, looking at My Little Pony, we can map archetypes onto each other. While Spike may appear to be a dragon, his visual cues and behaviour seems remarkably dog-like, thereby resonating with common human-mapped perceptions of dog behaviour like "Loyalty."

Happily, this exact same trick can be used here. Most of the attributes we ascribe to dragons are functionally taken from eagles. Splendor, vanity, power, and wisdom are all trivially mappable onto the archetype of "Eagle" and "Dragon" alike.

Therefore, consider the shared cultural archetypes the players in your LARP have (just basic animal ones for now) and figure out what traits you want to evoke. Sly dragons map quite easily to the "cat" archetype. Lounge, express sibilants (though don't hiss them), and express cat behaviour while calling it "dragon." So long as you don't actually purr, you'll evoke "cat" without being "cat." And therefore lend those aspects to "dragon" which we don't have many useful shared cultural assumptions about anyways.

From a perspective of the game, haughty arrogance isn't particularly fun. To make an engaging NPC, especially an engaging rubber-forehead alien NPC, make sure you choose personality traits from animals that are generally approachable. These traits combined with liberal plot hooks will make people interact with you more, and thereby create a more real "drake" through interaction.

I kind of picture a dragon viewing humanity as a cat would view a mouse. It would be amused with the silly creatures and enjoy toying with them. If someone were to come up and ask if they could have some ridiculous thing or achievement, the dragon would happily spin a litany of complicated tasks and assure the person that at the end they will have what they seek. If the person came back later saying it didn't work, the dragon could happily reply, "It is so delightful that you played along. Most give up long before you did, but not you. You are right: it didn't work… and would never have worked. I'm glad you understand that now."

Not the answer you're looking for? Browse other questions tagged roleplaying dragons larp or ask your own question.

22
How can you encourage players to role play in line with their culture?
5
Role-play enhancing items
6
Play as a Dragon with Special and Supernatural Abilities
30
Roleplaying a Dragon Better
19
How to role-play serious characters?
5
How can I role-play schizophrenia?
8
How can I use dragon bones?