What's the name of this dice set with blue letters on red-and-black?

I have a red speckled dice set with blue numbers, and I think the company that made them was Chessex. However, I have searched Google for a few minutes, but could find nothing on this set. I also have the Chessex Speckled Cobalt and Chessex Speckled Recon, which is my information on these dice. The dice themselves look like the Speckled Silver Volcano, but the numbers are the same color as the Cobalt or the Blue Stars. So that rules the Strawberry and the Volcano speckled dice out. Thanks for your help.

I have taken a picture, these are the dice I don't know the name of: 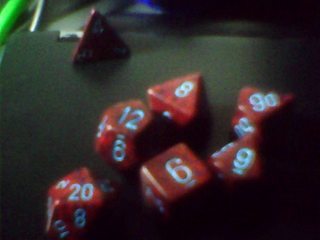 My only camera is pretty poor quality, so the picture below might help. These aren't the exact same, but very similar style, just different number color: 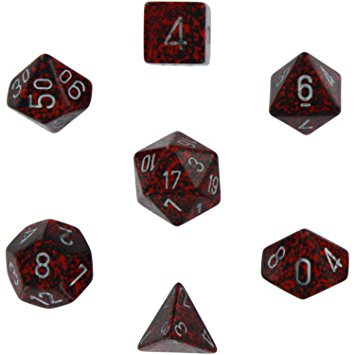 That was a set named Veronica Speckled, by Chessex. I was searching for it as well but looks like they no longer make it.

Veronica is an out of print color and we do not have any of the 7-die sets available. The only set still available is the 10 d10 set. We do have some of the loose dice shapes as well. It looks like we have d4, d6 and d8.

Unfortunately, some of our old webpage spaces are still searchable. Hopefully one day we will be able to properly update our website to fix that problem.

Let me know if you have any questions.

I believe I have the set you are describing. I definitely have the set in the second image. Part of the reason for the difficulty in identifying them is that the number colour for this set has changed during its run. I believe, but cannot confirm that the specific name of the set has also changed from time to time.

The company responsible is Chessex, and when introduced the line was called Mercury. These were described as black and red speckled dice. They have had silver, white, and gold numbering to my knowledge since introduction.

The 'mercury' pattern with silver numbers is now known as 'Silver Volcano', I believe. A search for mercury will reveal its current coloration (yellow/gold) numbers.

11
What is the technical name for "cylinder" shaped dice?
8
What's this roleplaying game that came with a video and a box?
31
Is there a name for this 20 sided die with two 1s, two 2s, etc?
15
What game uses dice with compass point arrows, forbidden signs, explosions, arrows and targeting reticles?
16
What game uses dice with engraved faces, weapon symbols, double weapon symbols and object symbols?
11
What brand and style is this D20?
28
What game uses yellow 20-sided dice with letters and arrows?
18
What's this dark fantasy-themed RPG with a core mechanic based on rolling d10s and grouping dice results to be under a specific sum?