How big an advantage would wealth confer to the development of a character?

The question is specifically applied to D&D 3.5 and the world of the Forgotten Realms.

A little background first. I am designing an adventure where I plan to have one of the NPCs-not exactly an adversary but potentially one if the players pursue certain paths-to be a wizard who owes much of his success on the fact that he begun his adventuring carrier while being already the equivalent of a billionaire in our terms. Basically the scion of an aristocratic family who had access to vastly superior items than your average 1st level character (or 15th level character for that matter). To quantify it let's assume that 3.000.000 gdp were available to purchase equipment at level 1 and access to respective magical items.

The problems arise because as part of the story I would like him to have begun his adventures during the same time as a player character-an old rivalry of sorts being part of the backstory-but having progressed much faster and grow more powerful in the same time period than the player characters because of his wealth. Again to quantify it, he will be at level 20-22 while the players are currently at level 15.

How big an advantage would wealth confer to the development of a character and how fast could it accelerate his progression?

I understand of course that class-specific skills, intelligence here, must be at least decent to begin with but I envision a slightly above mediocre skillset, say an intelligence score of 16, but augmented by magical means as he grew more powerful.

Also I don't assume that the said character hired armies of mercenaries to aid him in his battles but rather soloed his way to "typical" adventures-albeit faster and with greater precision. I am trying to miniplay-test such scenarios to see if the gap in power can be plausible and would like some thoughts on the matter. To some extent I fear that players will react negatively to this gap but I actually hope to capitalize on such a reaction.

What can Wealth do?

Ok, let's quantify it a bit. What would massive wealth do for a character? First of all he'd have all the goodies he wants. He'd run around in the best magical gear available, even more than his level repective wealth should allow.

He'll hire henchmen to help out his leveling by supporting him in combat and bringing him to the dngeons faster (travel time reduction by horse or magic teleportation), he will hire Librarians to check for the solution for puzzles and locations of dungeons, he can hire the best teachers to give him the spells he wants... and raiding dungeons will keep a steady influx in money for him.

Let's face it: the biggest time consuming factor for a hero group is not the dungeons itself, it is overland travel. They spend weeks and months to get to the next town and then days to investigate till they find the dungeon.

What took the heroes maybe 6 weeks, he did in 6 hours. The dungeon itself takes them the same time, but not spending 6 weeks of travel and research between dungeons and assuming doing a dungeon takes about half a week, this means the wizard does 13 dungeons in the same time the heroes need to find and clear one.

He only needs to accumulate 85,000 more XP to be lvl 20 when the heroes are lvl 15. That is 181% of the XP the heroes accumulate. So he just needds to do two comparable adventure for each adventure the heroes do. Which... can be done pretty much by eliminating or greatly reducing travel time and outsourcing the research.

How much overkill will his wealth become?

As he started with 3 million gp when standard wealth at lvl 1 is about 150 gp and assuming a simmilar factor of 20,000 times the standard wealth, he'd end with LOTS of cash: assuming PC progression he can buy at lvl 20 a country (15,200,000,000 gp wealth) and still a city if you use NPC progression (4,400,000,000 gp of wealth). With that funds he could levy an army if he was in the mood for it, build a castle and still run around like a christmas tree of the best magical gear available.

Now, here comes the problem: He has all the moneys he might need and want, and is 5 levels atop the group. With his toys he is clad in the best armor available for a wizard (which is probalbly a very espensive ring of magical armor and ioun stones), and he has all the deadly lvl 9 spells... To put it in comparison: He became a dragon in human shape. He might have prepared and a bound large demon or two, that each alone might be troublesome for the heroes and he has most likely henchmen, informants and followers of similar level to the heroes available should he need them.

And that does not count his right-hand-man. Not his assasin or most trusted goon, but the most fearsome man a richman can field: his accountant. The guy he hired to control all the wealth he doesn't carry around in magic toys: The wizard literally has the funds to own a city. That means everybody in the city owes him or his quartermaster because he gives them the ability to live a live at all (shelter, protection, allowance to run buisiness etc) which explains the huge ammount of wealth (tax). Sure, they might not like him (though a smart evil overlord owning a city or metropolis or country will make sure they do), but rebelling against the one person who's funds keep the city/country afloat at all is suicide. What happens if the wizard disappears? The money does too, the prosperity of the city is gone in moments, anarchy and downfall. So just by the virtue of being the souvreigh and the heroes being enemies of the souvreign, the heroes become personal enemies of the population if they threaten the Status Quo.

Wealth is the best superpower. Because money=friends, backup, information and all the toys.

I see the question has already been marked answered, but I would like to share an example from an actual gaming session.

My character, a psi-artificer, decided to take the Landlord feat (Stronghold Builder's Guidebook) in order to build our party of 6 players a mobile stronghold to serve as a base of operations. One of the other players was so intrigued by my idea, that they also took the feat, and pledged all the virtual wealth gained thereby to my endeavor (see feat description for details about the 'virtual wealth'). The rest of the party was also interested, and pledged pretty much all their free gp to the project.

I decided to start with a folding boat from the DMG. It is a briefcase that can transform into a rowboat or into a single masted sailing ship. Referencing the Stormwrack book reveals that this is the same as a Pinnance (but with only one mast, instead of the two common to most pinnances.

After a lot of crafting (and detailed checking of various sources), I came up with the following build (partial map included for convenience): 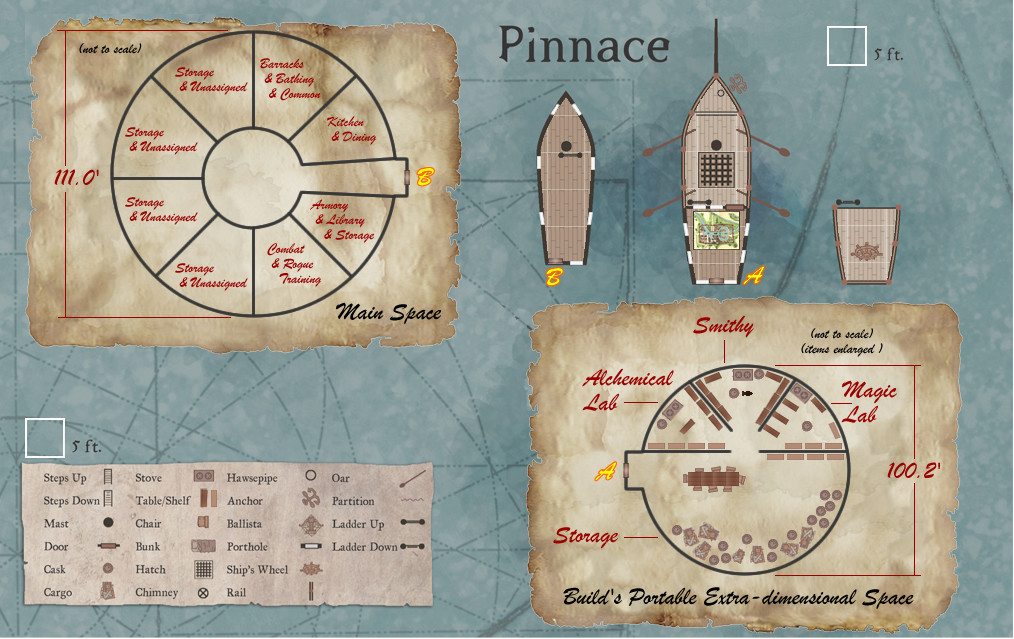 Here is a partial list of what it has:

If I remember correctly, by using the party's skills, powers, and spells to gain discounts on DIY crafting, this came in under 200,000gp. Now, while I didn't add weapons in order not to tweak my DM's sensibilities, one certainly could consider the option....

Now, this only uses a fraction of 3,000,000 gp. Consider further the mobile stronghold, with more money, it could have complete immunity to all energy types (covering anyone standing on the deck), protective circles, easy access to healing, cover, and concealment, tack on a Mirage Arcana and you have an instant cloaking shield, Teleport without Error multiple times per day, Plane Shift a few times per day, Shadow Walk for speed, add a Spelljamming Helm to make it a spaceship, and of course, you could add all kinds of weapons - or have N/PCs carry weapons of all kinds: wands, bows, small ship-mounted siege weapons, shrink a bunch of boulders and then dispel it as you drop them in an aerial bombardment, shrink lots of water and air drop it to flood out someplace, etc..

Given that this mobile stronghold can fly, submerse, burrow, as well as sail, it can literally go pretty much anywhere. And since it's immune to fire, you could park it in a nearby volcano if you really wanted to, while hunting all sorts of creatures.

This is in addition to any equipment that 3 million could buy, or attract. One thing's for sure, all the merchants will be flocking to bring the best and most exotic items hoping that some of that wealth will drop their way.

Not the answer you're looking for? Browse other questions tagged dnd-3.5e wizard forgotten-realms wealth or ask your own question.