What does 'horizontal to you' mean?

Does this just mean that I can't tell a creature to climb a ladder? If I am spider-climbing on a wall, can I command the target to climb the wall? If there is a slope like a hill and I am standing at the bottom on flat earth, can I only indicate a direction that is horizontal to the horizon?

Horizontal means parallel to the horizon or the “ideal” flat ground (even if no flat ground is nearby). Even if you're spider-climbing on a wall, horizontal stays horizontal — it's not sensitive to your personal orientation.

You just can't indicate “move directly up” or “move diagonally down” or something with this spell. No forcing people to jump or burrow into the earth.

A target isn’t compelled to move into an obviously deadly hazard, such as a fire or pit, but it will provoke opportunity attacks to move in the designated direction.

You may designate any direction on the horizontal plane which is defined as being perpendicular to the caster's local gravity (when concerned with such things, such as on different planes with varying gravity directions). Then the target uses as much of its movement as possible to move in that direction.

The spell does not restrict the target using movement in any way beyond using as much as possible in the attempt to move in the direction chosen. If it must go up or downhill, climb over a wall, walk round a fire, swim, fly or crawl to be able to move in that direction, it will use as much of its movement as possible to do so. The only restriction is that it won't do things such as walk off a cliff or through the Wall of Fire. However it will risk OAs to maximise the distance moved in the chosen direction.

So just because the target is standing on a slope (or the caster is up a wall or flying or even ethereal) and you choose a direction that would lead it downhill towards from the caster (for instance) that does not stop the target from moving in that direction, it just moves vertically down as well as moving horizontally away.

I think, that you can't do it. You can indicate direction that lay in the same plane of you feet (in normal condition, excepting fallen state, e.t.c), and if you choosing ladder - it's athwart first chosed direction.

Also, here the reference, with comments about deadly spots.

And if you are a spider-climbing on a wall, I think target can move only 2 directions 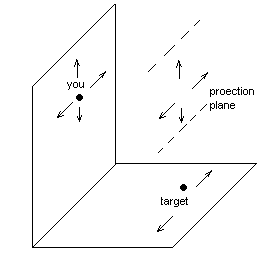 2
Thickness and other properties of wall of force?
7
How do Grease and Spider Climb interact?
9
How strong is the Spider Climb force (against rushing water)
28
Does this Tenser's Carnival Attraction gimmick work?
2
What are the motion and weight capacities of a rope of climbing while unattached?
3
Does climb speed from other sources stack with the climb speed from the Spider Climb spell?
8
Does a target affected by the Compulsion spell have to take the Dash action?
8
Can 'mold earth' create climbable steps in a stone surface?
16
Can Major Image and forced perspective make illusions appear larger?
4
Does moving while under the effects of the Spider Climb spell actually use your climbing speed?