What are the mechanics for large scale combat?

My players have recently become leaders of a group that includes 256 people and I don't know how the mechanics work for cases such as this. Is there a guide somewhere for large scale combat that determines losses and such? Homebrew systems are acceptable if no official mechanics exist.

This is a basic explanation of how the Mass Combat system for Pathfinder works. The system is an abstraction of mass combat, and not supposed to be a simulation of large-scale battles, but you will see that once you define certain aspects of armies, the battles flow quick and easy (Note that the system is simple enough to be used on any D&D-clones).

The first thing you have to define is the Army Challenge Rating (ACR), that defines how strong as an army they are, usually defined by the number of soldiers (units) and the Challenge Rating of individuals. See Army Sizes table for reference: 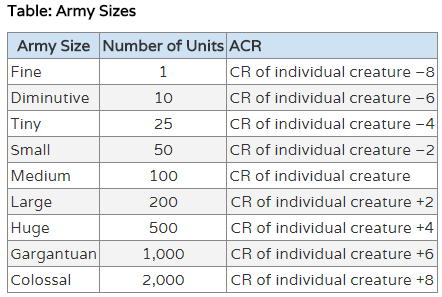 Now that you know the ACR of your unit, you can define pretty much every other stat:

Now, there are also a few other stats not based on the army's ACR:

Combat works by taking turns, which have no actual time frame set for them (I personally use 1-hour periods to keep things interesting), while actions happen simultaneously. Meaning that both armies could defeat each other at the same time.

Each battle is separated by several Battle Phase (turns), which are divided into 3 smaller phases:

To resolve attacks, you simply roll your Offensive Modifier (OM) against the target Defense Value (DV), and for every point above their DV, they suffer 1 Hit Point damage, until they reach 0 hp, are defeated and the surviving units rout automatically. This means that you have to actually roll higher than the defender's DV in order to cause damage (unlike attacks against AC).

A natural 20 still causes a minimum of 1 damage even if the result is bellow the defender's DV.

Armies that take enough damage to have remaining hp equal to their ACR or less must make a DC 15 morale check at the end of the melee phase or they will rout. This means that your typical 100-man fighter army will try to rout when they reach 1 hp.

When an army routs, any engaged enemy army can make one last attack for free, just like an Attack of Opportunity.

The Strategy chosen defines how well the army fights during melee, and to change your strategy after the battle has started requires a DC 20 morale check by the commander. 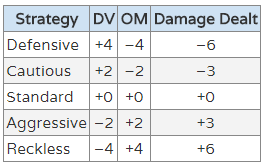 Note that the OM modifier and damage dealt modifier are not cumulative, Cautious means -1 damage, and Defensive -2 damage. While Aggressive grants +1 damage and Reckless grants +2 damage. The table is not clear enough about this and that has been clarified by the author.

Well, this was the purpose of fighting and so, it must have a few rewards. The first one is the bragging rights, you won. The second is that the last army in the battlefield wins a new tactic and their morale increases by 1 permanently, to a maximum of +4 morale gained from victories and the commander may win a free boon as well. Finally, once the survivors regroup, the army also recovers a little hp up to their ACR and are ready to engage another army if necessary.

The author of this system, originally for Kingmaker and later reviewed for Ultimate Campaign, Jason Nelson, also has expanded the system on a couple of third-party books, Ultimate War and Ultimate Battle. Along with Ultimate Ruleship (which expands the kingdom building rules), these three books will greatly expand your mass-scale pathfinder experience.

Pathfinder mass combat rules are here. Is that what you're after?

Not the answer you're looking for? Browse other questions tagged pathfinder-1e mass-combat or ask your own question.

34
Combat rules for large battles
5
Are there any published rules for dealing with mass combat in D&D 4e?
23
Keeping Mass Battles interesting for players
6
How can I run a large battle in The Dark Eye?
3
How can I prevent one character from leaving the group to do his own thing?
16
Everybody knows how to make magical items. What about magical “places”?
11
Is letting a player use a Large or larger race a bad idea from the game balance point of view?