What penalties to movement apply to the following scenario containing multiple hazards?

Alvy is a Ponykind Unicorn (from the Ponyfinder campaign setting) - she is a medium-sized quadruped with a movement speed of 50 (35 in armor). She is on the first floor of a house; on the floor above her, a battle is taking place that her allies are already engaged in. On her initiative, she wants to navigate several terrain obstacles in order to get into the fight.

First, she must run up a set of stairs which are half of a square (2.5 feet) wide. Halfway up the stairs, they become concealed in an area of magical darkness. At the top of the darkened staircase, the hallway takes a 180-degree turn, going back the other way in the other half of the same squares (still 2.5 feet wide, still concealed in darkness). Somewhere down the hallway, outside the darkness and first door on the left, the battle can be found. 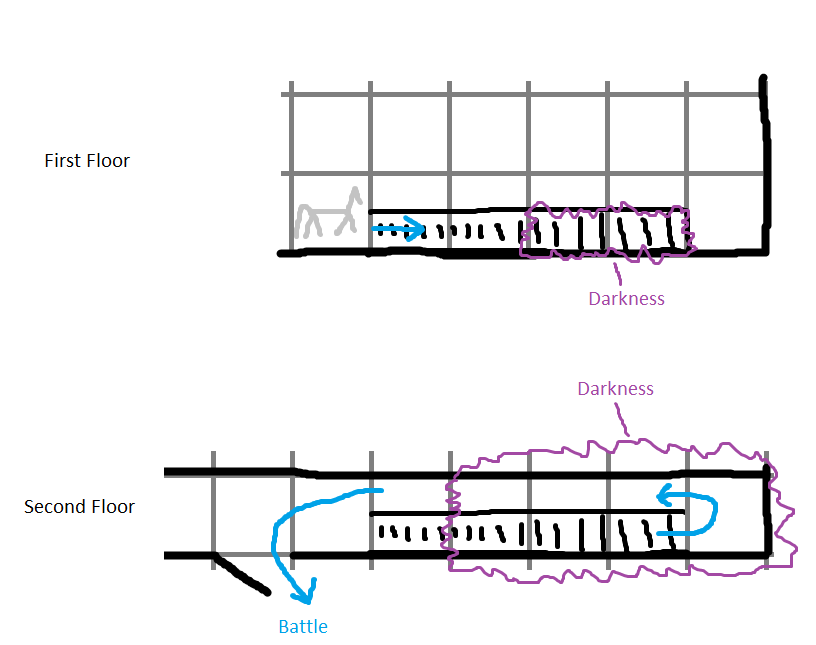 There are multiple potential obstacles that might impede Alvy based on the rules:

How would these issues effect Alvy? Which of these problems stack which each other to create a more complex problem, and which do not? If Alvy possessed some special ability that allowed her to ignore Difficult Terrain, which of these hazards may it or may it not negate.

There are three conditions hampering you here:

Hampered Movement: Difficult terrain, obstacles, and poor visibility can hamper movement (see Table: Hampered Movement for details). When movement is hampered, each square moved into usually counts as two squares, effectively reducing the distance that a character can cover in a move.

If more than one hampering condition applies, multiply all additional costs that apply. This is a specific exception to the normal rule for doubling.

The core rulebook (p.194, 6th printing) explains what this means with an example:

Which means that to enter a square of difficult terrain costs 10 ft, while to enter a square that you have poor visibility costs another 10 ft, and to squeeze into an area you don't normally fit will cost another 20 ft. This means that each 5 ft square that you want to walk that has three different conditions will cost you 40 ft of movement (or eight times the normal).

Considering your images and that your current position is square #0: 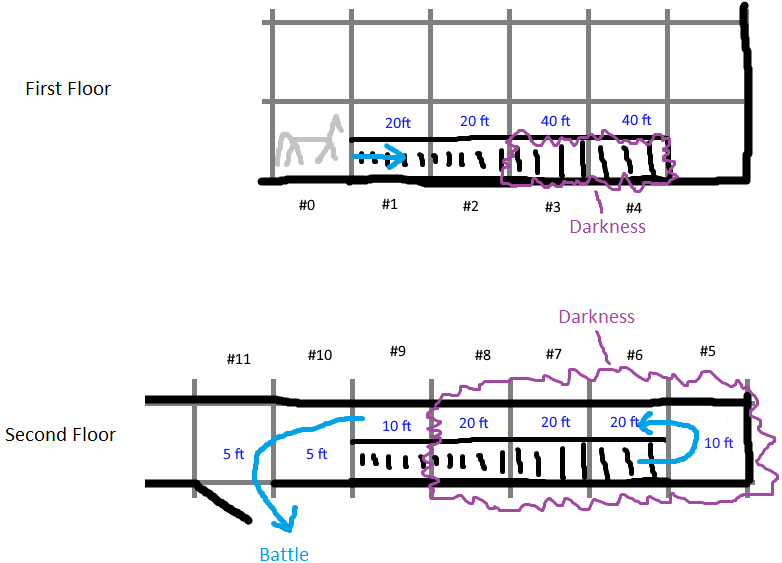 After all that, your movement is back to normal.

If you have 50 ft of movement, this means that you can move up to 100 ft per round (double move) and end your movement at square #3 a the end of the first turn, then move the rest of the way through this adverse environment, stopping right at square #7 (squeezing and in darkness). On the third turn you should be able to enter the room, after squeezing past squares #8 and #9.

It's much worse if she is armored (35 ft movement), meaning that she only has 70 ft of movement per round. She will end the first turn in square #2, as she does not have enough to enter the third (requires 80 ft movement). She will end her second and third turns on squares #3 and #4, respectively, for the same reason. She will end her fourth turn on square #8, and on the fifth turn you are able to walk into the room.

If she has any ability to ignore Difficult Terrain, that means that the squares that have stairs would cost only 10 ft of movement instead of 20 ft, or 20 ft in darkness. As such, she will end her first turn on square #5, then end her second turn on square #9, and finally, she can spend a single move action to walk into the room.

You cannot, however, move diagonally from #10 directly into the room (CRB, p. 193), because the wall counts as a corner:

You can’t move diagonally past a corner (even by taking a 5-foot step).

I shall happily explain this problem to the best of my ability, but be warned that it will be verbose and take several stages. If you don't want to read the whole thing, just skip to the TL,DR at the end.

Though some links in the page currently go nowhere at the moment, The following page that this link is connected to dictates that each of the conditions double into each other as they appear specifically under the Hampered Movement table and the combat section immediately afterwards.

Purely by the numbers, if the stairs were considered difficult terrain along with the inherent cramped passage, it would cost Alvy 20ft (4 spaces) to move 5ft (1 Space). As soon as the stairs move into the shadows, this multiplies into 40ft (8 spaces) for the same cost, though since this would exceed Vs' current movement, this would be a full round action. Number-wise, the bend doesn't count, but once Alvy is out of the shadow and stairs, the penalty would be 10ft for every 5ft.

However, the GM should also consider the body type of Alvy as well as the context of each obstacle. While a small area and difficult terrain each count as obstacles, putting them together might actually be no more difficult. Considering the Stairway is ascending rather than descending, the tooth-like construction would be negligible to Alvy who would be propped between the 2 walls and wouldn't need to struggle as hard reaching a surface to find proper footing. In the same vein, it would be a nightmare to return down the stairs since Alvy would need to shimmy down to each step on top of through the stairway, a situation that could logically negate an effect that ignored difficult terrain, unless it involved intangibility. Another way ascending this passage would give the maximum x4 penalty would be if the stairs were covered in something slick, or if there was loose sand instead of stairs. The biggest problem yet would be the 180 degree bend at the landing; while a bipedal creature physically could turn on a dime, a quadrupedal creature needs a minimum turning radius in order to move. As a real life example, if a dog were to move behind a couch in the corner of a room, it would move backward rather than try and force the turn at the corner. With this in mind, if the landing was any smaller than shown in the pictures Alvy would not be able to ascend further than the landing.

In the end, just remember to double the movement penalty for each obstacle unless the context for the obstacle would make them negligible or impassible

Not the answer you're looking for? Browse other questions tagged pathfinder-1e movement terrain ponyfinder or ask your own question.

8
Can large characters sqeeze through 5' spaces between 2 enemies, or do they do something else?
2
Does a Ninja using Light Steps provoke an attack of opportunity, and can it be avoided with Acrobatics?
5
Can a scout with flawless stride run through difficult terrain?
3
Can a Rogue, with Rogue Crawl, charge while prone?
13
How much movement is needed to climb up a spiral staircase?
19
Can characters who can't see move through an area just as easily as characters who can see?
4
Given a space occupied by a Tiny enemy, is a Small creature unable to move through it even though a Medium creature could?
1
According to the Rules Compendium, can I charge through a square that would hamper my movement as long as it isn't difficult terrain?
6
How does the Battle Dancer Rolling Flurry work underwater?
11
Can a Medium-sized creature effectively block a 10-foot-wide hallway by standing in the middle of it?