Does Otiluke's Resilient Sphere on creature that swallowed another prevent escaping the swallow?

Does Otiluke's Resilient Sphere prevent an engulfed/swallowed creature from escaping? I can think of two examples to show what I mean:

1. Yes, they are engulfed until dispelled

Nothing, not physical Objects, energy, or other spell effects, can pass through the barrier, in or out, though a creature in the Sphere can breathe there.

and a Gelatinous Cube's engulf says:

An engulfed creature can try to escape by taking an action to make a DC 12 Strength check. On a success, the creature escapes and enters a space of its choice within 5 feet of the cube.

2. Yes they can escape and prevent further damage

If the toad dies, a swallowed creature is no longer Restrained by it and can escape from the corpse using 5 feet of Movement, exiting prone.

When the giant toad dies the character is no longer restrained. By spending 5 feet of movement the character can free itself from the giant toad corpse and thus not continue taking damage. ORS does not prevent this because the 5 feet of movement does but actually move you five feet (and thus would not cause you to hit the ORS barrier), it is just a cost to escape the stomach if the giant toad. This is similar to the way that spending movement to stand up from prone does not move you anywhere but just let's you stand up. 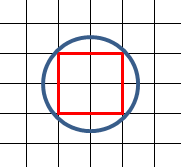 An engulfed creature can try to escape by taking an action to make a DC 12 Strength check. On a success, the creature escapes and enters a space of its choice within 5 feet of the cube.

From the diagram we can see that there is space in at least 8/12 of the adjacent spaces. Yes they can't get entirely into the next square, but a character doesn't take up the entire square.

The question then becomes how viscous (If that is the right word) the Gelatinous Cube is, because staying out might be harder or easier. I would rule that since heavy objects float inside then it takes a reasonable force to actually get engulfed and the person won't automatically fall back in.

Since the person is pre-occupied with staying in the safe space I would give then disadvantage on everything or similar; possibly an athletics check to not fall in due to the curved nature of the floor they are standing on but that would be complete house-rule territory.

The Giant Toad is easier, once you kill it you climb out and stand on the corpse, so you are safe from the stomach acid.

Not the answer you're looking for? Browse other questions tagged dnd-5e spells monsters or ask your own question.

6
Gelatinous Cube damage
3
How does Resilient Sphere work?
7
How does a gelatinous cube's special ability engulf work?
17
Does Otiluke's Resilient Sphere beat Magic Circle?
7
Does Pack Tactics work for a swallowed creature?
8
Does the Giant Toad's Swallow also inflict its Bite damage?
37
Is a character swallowed by a giant toad considered “unseen” on an attack against the toad, granting advantage (which cancels out disadvantage)?