In the Basic Rule Book for Gamma World 2e on page 6 it says the following about Dexterity:

Which is fine, but I can not see any other reference to DX modifying the surprise roll, or how the mechanic actually may work. Am I missing it? I know these older games sometimes stuck rules in the oddest of places. Or is this a misprint, or a holdover from 1e? Would there be an errata doc for something this old?

Note: TSR did do an errata for GW 3e, but that was a hot mess in the initial printing.

How To Check For Surprise

A Surprise Check consists of a 1d6 die roll. Characters are normally surprised on a roll of 1 or 2. Any other result has no effect. Two parties can simultaneously surprise each other (if both get 1 or 2 on their check). In some cases, there will be a greater or lesser chance of surprise. For example, characters negotiating with a potentially hostile NPC party might have a smaller chance of being surprised if the NPC's break off negotiations and attack. In this case, they might be surprised on a roll of 1 (not 1 or 2). On the other hand, a party moving Fast should have a greater chance of being surprised (on a 1, 2, 3 instead of 1 or 2).

I have CTL-F'd through the PDF, looking for Dexterity, DX and Surprise, but I cannot seem to find any reference other than the one quoted above.

I can come up with a good house rule. I am just wondering if anyone has

a) RAW on how to change surprise based on DX, in GW 2e. b) If not what is the RAI (if that can even be determined in this case).

NOTE: Personally I am leaning to not including it. DX can get crazy high in GW, and the die used to determine surprise is a d6. It seems weird to let the bonus be 1.5x the max die roll. But then again, look at how they do initiative.

Dexterity seems to have no official relationship to surprise in Gamma World, Second Edition

I reread Gamma World, Second Edition (1983) (hereafter GW2E). No, really. Here's GW2E—sans dice and crayon (for coloring in the numbers on those dice)—on my table: 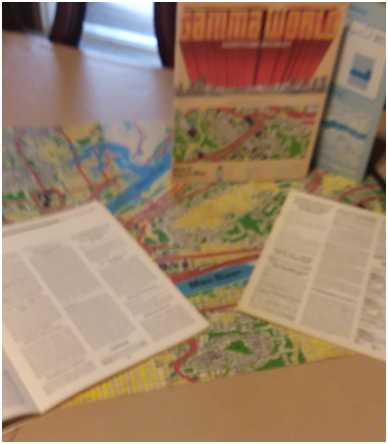 (My terrible photography skills on full display, obviously.) This means that I, too, read the same things you did on Dexterity (Gamma World Basic Rules Booklet 6) and on Surprise (27) and even plumbed the Gamma World Adventure Booklet just in case (because preteen me didn't realize when he initially got the game that without the Adventure Booklet the game is unplayable). I reached the same conclusion as you: GW2E mentions surprise in its description of Dexterity yet doesn't mention Dexterity in its description of surprise.

I also checked the Dragondex for articles on GW2E, and while there were quite a few, the one that I thought might be helpful was helpful only by its omission of information. That is, James M. Ward (the first design credit on GW2E) and Harold Johnson's article "Gamma III: Campaign Conversions for the Third Edition Gamma World Game" (Dragon #117 76–80) on Surprise says

Surprise is no longer determined by the roll of a six-sided dice [sic]. Instead, the character most likely to first notice a startling situation (or member with the highest Dexterity score) must make an Intelligence Check vs. the GM-assigned difficulty of discovering the hidden item and reacting in time. (80)

To this reader, that very brief summary of how to determine surprise in GW2E—when compared to how surprise is (will be?) determined in third edition—makes it sound like even the game's designer didn't use a character's Dexterity attribute to adjust chances of surprise.

Borrowing from Advanced Dungeons and Dragons

While it's far from impossible for GW2E to be a player's first role-playing game, it's also extremely likely a player came to GW2E from AD&D wherein, like in GW2E, sides in a conflict determine surprise using different 1d6 rolls with a low roll indicating a side is surprised.

This reader suspects—but can't confirm—that something like Dexterity Reaction in Surprise (Dungeon Master's Guide (1979) 62) was considered for inclusion in GW2E yet later outright cut or, more probably, mercifully simplified to what it is in the present text.

Nonetheless, if a GM's determined to have GW2E characters' Dexterity attributes influence the chance of surprise, a GM could do worse than incorporate Dexterity Table I's Reaction/Attacking Adjustment (Player's Handbook (1978) 11) into his GW2E game, adjusting a surprise roll's result for individual characters on a side based on those characters' Dexterity attributes (i.e. Dexterity 3 is −3, 4 is −2, 5 is −1, 16 is +1, 17 is +2, and 18 is +3). This will, of course, sometimes leave some members on a side surprised while others are not, and such granularity isn't for every group. Also, let me be clear: I haven't playtested this house rule for fun or balance.

(I should also note here the presence in the Dungeon Master's Guide (1979) of the section Mutants & Magic (113–14), a description of how to convert GW1E characters to AD&D that says that Dexterity should be used "as shown" when going back and forth between systems, strongly implying that at least GW1E characters use Dexterity for the same things in AD&D that they do in GW1E and vice versa.)

What I couldn't do that someone did

I couldn't check first edition Gamma World to see how surprise is determined in that game; I don't own it and, given the price, don't plan to. However, the Grognardia blog post "Gamma World, Cover to Cover (Part VI)"—part of series of 12 posts reading and discussing GW1E—says, "Initiative is subsequently determined by a 1D6 roll, modified by high Dexterity." A comment by user Zenopus Archives takes issue with this idea, saying

It's not very clear, but I believe the d6 role only determines first strike on the first round of combat if one side is surprised. If neither party is surprised, it seems that the highest dexterity is used to determine first strike. This is buried on page 7 in the section titled "Dexterity": "For example, when a being with a dexterity rating of 16 encounters a being with a dexterity of 10, the being with the dexterity of 16 will have first choice of actions—in combat situations, have first strike, and so forth." The section on surprise refers back to this section.

This is interesting for two reasons. First, so far as I can tell, GW2E mentions initiative only in Part V: Example of Play:

(Preserved as best I could from the 1983 original except reading the section's introduction is necessary to know the player's name is Cleve.1) Second, the modifiers that Zenopus Archives mentions in the blog post comment are identical not only to the aforementioned AD&D Dexterity Table I Reaction/Attacking Adjustment column from the Player's Handbook but also identical to those from the GW2E section on Combat Modifiers (Gamma World Basic Rules Booklet 32).

In other words, so far as I can tell, GW2E omits any formal information about both initiative and how the Dexterity attribute affects surprise… an absence, I'll note, that never stopped preteen me from playing the heck out of Gamma World.

What you can still do

I didn't reach out to Jim Ward—like attempting to contact him through his Facebook page—in an effort to get an answer to this question. These steps must be taken by someone more ambitious than I.2

1 Cleve is, at the time of this writing, the 4,960th most popular name in the US, behind Heena yet ahead of Yancey. I don't know how popular it was in 1983.
2 If you do, could you find out if he had, like, a friend named Cleve?

Not the answer you're looking for? Browse other questions tagged ability-scores surprise gamma-world gamma-world-1e-2e or ask your own question.

7
What are the major differences between 1st and 2nd edition Gamma World?
2
What's the difference between the “Gamma World RPG” and the “Gamma World Box”?
7
Taking a weapon away from an opponent? (Gamma world, & 4e)
22
How to determine surprise when only part of a side is stealthy?
18
Is the Alert Feat better than an Ability Score Improvement for a Rogue?
7
False Appearance, Movement, Surprise, and the Unseen Attacker bonus
15
Can surprise be granted by another skill than Dexterity (Stealth)?
9
How can we model “acting first” in a hostile parley?
21
If an attack alerts someone to your presence, can their initiative save them from being surprised in time?
17
Moving from one room/cave to another within the same dungeon