More specifically, how many BP and how much time would be required to clear a forest hex, essentially turning it into a plains hex?

If there is no answer by the rules, tested homebrew is acceptable.

Changing terrain or terraformation is not covered by the rules

Oficially, you cannot turn one terrain type into another using the Kingdom Building rules. Preparation in that context is to clear enough of the terrain to allow starting a settlement there.

Keep in mind that a hex (12 miles wide) of forest has the majority of that terrain composed by trees and undergrowth. While a settlement is an area of roughly 1 square mile. In other words, a settlement does not cover a hex entirely, only a fraction of it.

You dont want to prepare the entire hex to build settlements though. That would include clearing trees, moving boulders, digging sanitation trenches, and so on. You merely want to deforest a hex.

This is not covered by the rules in Ultimate Campaign, nor the three third-party child books from the same author (Jason Nelson), Ultimate Ruleship, Ultimate Battle and Ultimate War.

If you want to destroy the trees, starting a forest fire might be the quickest way to achieve that. Then you will have to clear the resulting mess, either turn that dead wood into lumber or move it elsewhere. Again, there are no actual rules for that, but forest fires are known for their devastating effect (and angry druids afterwards).

On average, more than 100,000 wildfires, also called wildland fires or forest fires, clear 4 million to 5 million acres (1.6 million to 2 million hectares) of land in the U.S. every year. In recent years, wildfires have burned up to 9 million acres (3.6 million hectares) of land. A wildfire moves at speeds of up to 14 miles an hour (23 kilometers an hour), consuming everything—trees, brush, homes, even humans—in its path.

Controlling the fire would be much harder than the Quench spell describes, as it will likely cover a larger area than what was initially intended. Which means that this is only a valid option if you want to get rid of several forest hexes in a single crime.

But you shouldn't destroy a forest

Your objective seems to be clearing a forest so you can have a nice field to plant things (just like in real life). But the system presents us more than one option to obtain food. The primary objective of building farms is to reduce Consumption (-2 BP per farm), but unlike farms, the Fishery (4 BP) reduces consumption by 1 BP and can be built near coastlines and rivers.

Alternatively, instead of reducing consumption, you can focus on building improvements that will generate extra BP, and forest terrains happens to be pretty good for that when you look at the Sawmill (3 BP), which increases your income by 1 BP. If built on a hex with a Resource, they wield an additional 1 BP (2 BP total, same as a farm), and this could be some type of rare and/or expensive wood. They can be built on the same hex as farms and fisheries too, and after 3 months, they already paid their initial cost.

Farms are the best improvement to reduce consumption, but only if you have plenty of plains terrain to build them. But considering that you are mostly on a forest terrain, your focus should be on Sawmills.

Ultimate Ruleship brings another settlement building that can improve your sawmills, the Lumberyard: 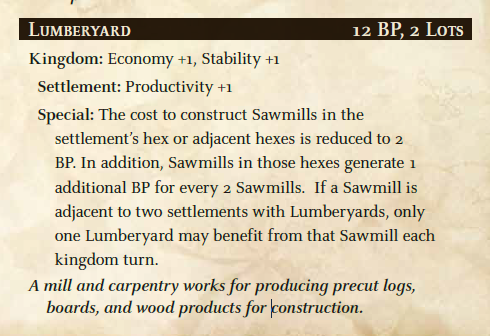 Building a Lumberyard means that not only your 7 sawmills around your town are cheaper (2 BP down from 3 BP), but they also produces additional BP each turn (up to 3 extra BP).

Make use of all that wood!

Another option is to create most of your buildings out of wood, the very same that you are removing from that forest. The rules for this are quite simple, they are cheaper, but are also more fragile. From Ultimate Ruleship:

Stone is assumed to be the default building material in the published rules (including brick and similar materials), but it is certainly possible to construct most buildings out of wood. The BP cost of a wooden building is half normal if using the standard published rules. If using the Construction rules in this product (...). The following buildings cannot be made of wood: Brickyard, Castle, Cistern, Colossus, Crematorium, Dump, Foundry, Graveyard, Moat, Park, Sacred Grove, Waterway. Tenements are always considered wooden buildings, but their construction time is unaffected.

Wooden buildings are considerably more fragile than stone buildings. Their Defense value is halved (rounding down), and wooden buildings impose a -10 penalty on Stability checks or other kingdom rolls to prevent damage or destruction. Buildings made of wood cannot provide Fame and cannot be the subject of an Endowment Edict.

A Pathfinder Kingdom Building hex is 12 miles across, or 6 miles to the side. This gives it an area of almost 94 square miles (often rounded to a slightly higher number for ease of mathematics.)

A settlement is created with one district, covering a 1 mile square. To add a second district, the same preparation cost must be paid again as was paid to clear a space for the first district. For forest hexes, this cost is 2 months and 4 bp, which suggests that an appropriate cost for clearing the entire ~94 square mile hex would be in the ballpark of 188 months (a little over 15 years) and 376 bp (as this would be the cost of clearing the whole hex in preparation for settlement)

Not the answer you're looking for? Browse other questions tagged pathfinder-1e house-rules realm-management or ask your own question.

11
Suggested house-rules for Pathfinder one-on-one storytelling
3
Are there any rules for wrestling / submissions aside from grappling?
6
Can Flail Snails be hexed without penalty?
13
Kingdom building. Multiple farms in one hex
6
On-the-Fly Crafting
40
Using downtime activity to research spells
6
Pathfinder Kingdom Builder: How big, area wise, is a hex?
4
How can I minimise the time players spend when they have many creatures with actions to take each turn?
0
Balancing Different Level PCs in PVP Pathfinder Combat
10
How to GM Realm Management in a Mechanically Engaging and Transparent Way?