How do I make players more comfortable in an unusual historical setting?

I run a lot of games/write systems set in specific historical/cultural contexts, because I like rpgs as a way to explore them and think they provide a great sense of place. However, I tend not to choose more well-known settings, like WWII Europe or Victorian England, because they've already been so thoroughly explored that they lose some of the uniqueness factor I'm interested in.

So far the people I've played/playtested them with have been enthusiastic about the ideas, but the games tend to start slow as they are hesitant to be creative because they don't want to 'be wrong' about how things would work in that time and place. However, I'm not so much set on perfectly replicating, say, 19th century Hong Kong in a given game as I am interested in seeing the game evolve from an off-beat starting point.

Do people think the best solution to this is to separate the actual history from the game history (i.e. emphasize that this is an alternate universe and they can feel free to depart as much as they want to from the historical details) or to provide a lot of background information to ground them as much as possible in the time period so that they're more comfortable there?

On one hand, the players' reactions are normal. Social context is central to any character, and the social context of medieval Europe just comes easier. You're asking for even deeper improv than a typical RPG session requires; it's skirting close to Whose Line Is It Anyway territory.

Which is great! If the players are on-board, this can be loads of fun. So, what to do?

Providing the players with a background information will certainly inform them of their options. However, beware of infodumps. You have a commendable love for history, but the players likely aren't as enthused about reading through pages of background information. Consider a one-page summary that lays out the half-dozen major, defining characteristics of the setting ("The Europeans rule," "The Chinese are martial artists", "Hong Kong is a big, dangerous port city"), as well as the major forces in conflict, what they want, major NPCs, and potential dangers looming on the horizon.

You can introduce one big non-historical fact into the setting. 19th-century Hong Kong is ruled by the Dutch, say. The English characters and flavor can be easily re-skinned into Dutch equivalents, and the basic conflicts will remain the same. This can break players' heads out of historical accuracy.

You can also help the players navigate this unfamiliar space by prompting them during play. When they get quiet, list a few action options. Maintain a light tone, making it clear that these are just a few ideas, and in no way a limitation.

As a Lazy player, I find two valid ways of being thrown into a situation like this.

Both styles work for me, as long as the expectations are clear.

Provide a means for trust and validate agency.

When there's a gulf of knowledge, one great fear of the people without knowledge is that they will do something "wrong." When it comes to rules expertise, players tend to react to it in two ways: shyness or completely random and chaotic actions. By being aggressively random, they not only test the boundaries of the GM and the rules, but insulate themselves from consequences by deliberately provoking bad consequences.

The same can be said for setting proficiency. As a GM, it's important to offer players background materials, especially during game. Perhaps you might want to allow players to pass notes about setting questions, or offer them the ability to undo conversations and actions (without limit at first, then tapering down as needed) to allow them to figure out the mores and hidden rules of the setting as well as the system.

Any RPG must be an alternate universe. While it is possible to be passive spectators, that level of passivity is more enjoyable in books. You should note that the starting conditions prevail and that the major actors may share some of the same motivations... but that the players actions are certainly able to derail whatever those actors have planned. No history survives contact with the PCs, that's why they're called the PCs.

You should offer as much background information as the players request. Don't force it down their throats. Don't pull a DM of the Rings: 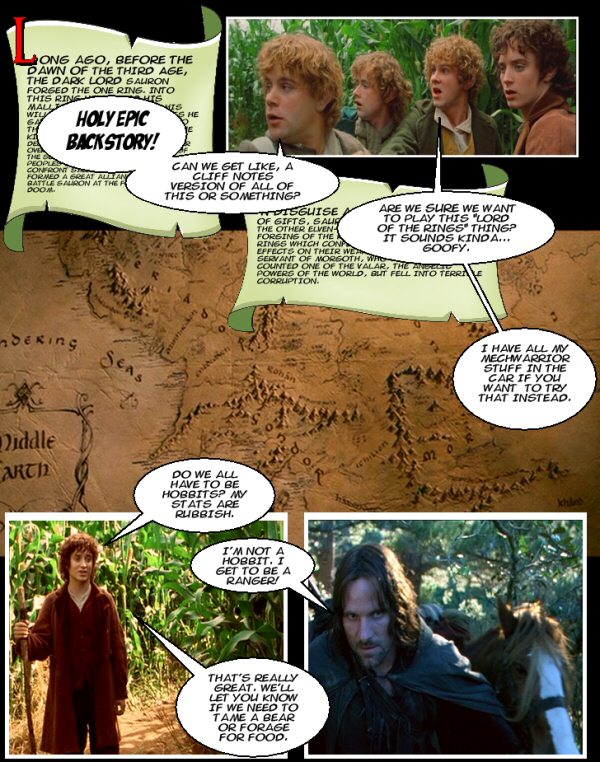 Instead, by offering yourself as a resource if they ask, you allow players to preserve agency and embrace authenticity if they so choose. If they choose to be non-authentic, either accept their actions or work with them on a way to reframe them for the time period. Having a specific prompt that you make, with the proviso that you'd like to work with them to frame their actions within historical authenticity, rather than to invalidate their actions, you should be able to support their own trust of their actions as well as preserve their agency.

On achieving immersion: If you can find a movie that mirrors your setting, show a 10–30 minute excerpt of it at character creation to "set the tone".

Allow players to specify that things are being done IC or OOC — and allow as many OOC questions as needed.

Make it clear that nonsensical actions will be disallowed but not punished. Incentivise understanding of the setting by rewording good IC play, even or especially when it came with help from your part.

Do people think the best solution to this is to separate the actual history from the game history (i.e. emphasize that this is an alternate universe and they can feel free to depart as much as they want to from the historical details) or to provide a lot of background information to ground them as much as possible in the time period so that they're more comfortable there?

What is their motivation for play? Are they reinactors (like wargamers) or RPG'ers? Most RPGers enjoy agency, so I would go with allowing them to depart from historical details — not "as much as they want", but certainly in any areas you feel encourages buy-in and does not break the setting.

We've done this a lot, with the same goal as you: to explore historical settings. In my experience the problem with doing this (and also a main benefit) is that people don't make the same ideological shortcuts as normal. When we play medieval fantasy or sci-fi or whatever new people tend to apply all of the racist, sexist, anti-religious, ethnocentric baggage they have in real-life to the game even more than normal because the game feels like a safe, non-judgemental space and so they aren't worried about being attacked for their unpopular beliefs. On the plus side, this makes discussing these beliefs via the game easier in some ways, because people don't start off defensive, but it also makes it harder because people don't start off critically engaged.

When you use a real-life historical setting with which they are unfamiliar, the default reaction is diametric. People immediately worry that their lack of knowledge will brand them bigoted in some way, and their shame cripples them from being willing to engage in any but the most cautious of creative expressions. When we began discussing this behavior with people, most people (especially the less self-aware) would indicate that they felt uncomfortable because the setting was unfamiliar. And sometimes resolving this would resolve the problems-- if the GM in collaboration with the other players talked to the new player about the historical setting for a couple hours or so, the new player would in fact then be comfortable with the setting and the game could be played. Further investigation, however, revealed that the purported lack of knowledge was not in actuality the issue. Sometimes we would play games where two different players were both independently familiar with the setting from different backgrounds. Other times, someone would read up on the setting to solve the 'feeling uncomfortable' problem. In neither case did things go well. In the first case, the game would usually result in a very impassioned argument between the two players in question, with strongly-worded personal attacks, and the game would have to stop and it would take days or weeks before the people in question were on good terms again. In the latter case, the person would begin the game not feeling as comfortable as they expected but expecting it to improve, which it usually did, until something they liked in their reading conflicted with what the other knowledgeable person thought and then they would either get upset and shut down and stop participating or get extremely anxious and stop creatively participating to instead try to guess what the group thinks a good person would have their character do with each action.

Our core group didn't generally have this problem, because we have long dealt with extreme ideological differences between players in regular play as well and so we've largely become comfortable with calling each other terrible people via RPGs. When playing with people outside the core group, awareness of the problem has seemed to help a lot in getting things to work out well, as has being explicit about our 'The GM's ontological and political beliefs are true in the context of the game world, but are open for discussion via narrative analysis' social convention.

If you don't already, having some agreement about who gets to decide how people work and what it means to be a person and all of that stuff is a critical first step in being able to play games like these without getting into giant fights over real-life issues in disguise.

Here's what worked really well for me during a rather long and involved historically-based campaign where the two of us both had our respective areas of expertise:

Not the answer you're looking for? Browse other questions tagged gm-techniques system-agnostic game-design historical-settings .

26
How to make magic items more interesting?
16
How do I ensure separation between historical events and the game world while still feeling historical?
13
How can I let players make more choices during combat?
7
Improving combat when playing on IRC
8
How deep information should players have in a political negotiation-focused edu-larp?
20
How can I moderate the flow of information in a discovery-focused campaign?
58
Is there any known limit for how many dice RPG players are comfortable adding up?
24
How do I get my players to be more decisive and take the initiative?
24
How can I make conversations with NPCs more succinct?