Why are knives and fists slower than swords and other weapons?

I was going over the D6 System Book on a whim to learn a new system, just to see how it handled things compared to systems I do understand, and while I was looking through it was largely simple... except for one aspect.

When I was looking at the weapons chart I saw that weapons had a speed attribute and a Damage attribute, and while the weapons like swords and axes and the like seemed fine, the weapons such as fists, and daggers (which seem to me like they'd be easier and faster to use) seemed to have a slower speed for some reason. 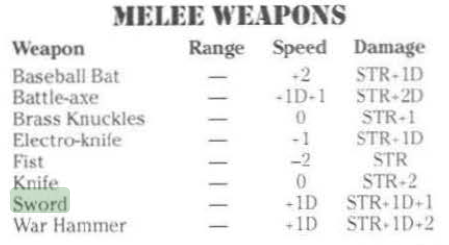 Why would a dagger or your own fists take longer to use than something like a Baseball bat, a Battle-axe or even a sword?

Swords and longer weapons tend to have longer reach and thus can threaten an opponent with fists or daggers before they can close the distance.

When simulating unarmoured duels in Historical European Martial Arts, if combatants are equally skilled, the one armed with a weapon that has longer reach tends to have an advantage in the match. This is because the combatant with the longer weapon is able to strike at the other person BEFORE the other person can.

For a more detailed lecture I recommend you check out Matt Easton of Schola Gladiatoria, HEMA instructor: https://youtu.be/9qJBGlChcXU

Not the answer you're looking for? Browse other questions tagged d6-system or ask your own question.