I'm making a Lion Shaman Druid and was interested in picking up a Dragonne as my Monstrous Companion at higher levels. A Dragonne is a 9 HD / CR 7 magical beast. What is its effective Cohort level?

I'm confused because looking at the chart a hippocampus is Cohort level 5 but 2 HD / CR 1.

A character with the Leadership feat can take a dragonne as a cohort. Such characters must have an effective leadership level of 10th. Most dragonne cohorts gain levels in barbarian, fighter, or ranger.

The feat allows you to combine Leadership with animal companions

Effective cohort level is used to define the level of your Monster Cohorts (Leadership) and here it helps to calculate your druid level on the Animal Companion table for monster cohorts. This effectively reduces your druid level for the purposes of calculating feats, skills, bonus tricks and special abilities of your companion. This is explained under the feat Monstrous Companion (published on Cohorts&Companions Player Companion):

Benefit(s): You can select a magical beast as a cohort in place of your animal companion class feature. Table: Effective Cohort Level determines the effective cohort level for your monstrous companion based on your effective druid level.

In other words, those companions are stronger than standard companions (animals), and to balance that out, they gain fewer benefits from your effective druid levels. Keep in mind that non-druids can take this feat (rangers, cavaliers, hunters, etc), so effective druid level is that class's level as a druid, which may or may not be equal to their class levels (rangers are level -3 for instance).

To help explain it, this is the text from the book (page 9) right before Monstrous Companion:

Many classes grant characters access to animal companions. When they reach 7th level such characters can also acquire a cohort through the Leadership feat. This may lead to a single character having both an animal companion and a cohort, which can significantly slow down gameplay and cause the character to be less important than the allies at her side. The Monstrous Companion feat allows a character to combine a monster cohort and an animal companion, gaining benefits over either without having to keep track of both.

Not many people know, but the GM may allow a character with Leadership to take Monster Cohorts (Bestiary, page 316). But this reduces the cohort's effective cohort level. Meaning that a Ghoul cohort (level 5 on the table) is harder to upgrade than a human npc, which would start with 5 class levels instead of none.

As explained in the bestiary entry for Dragonnes (bestiary 3, p. 104):

A character with the Leadership feat can take a dragonne as a cohort. Such characters must have an effective leadership level of 10th. Most dragonne cohorts gain levels in barbarian, fighter, or ranger.

So, dragonnes are level 10. Meaning that you must have a Leadership Score of 14+, and it would have to be a 17th level druid to be able to keep one as both your cohort and your companion, as illustrated under Monstrous Companion: 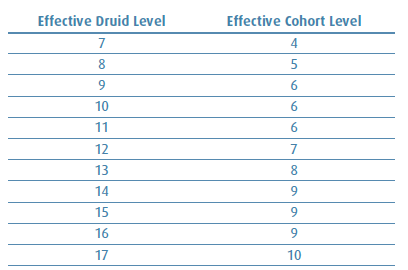 And for every effective druid level above 17th, your dragonne would gain 1 class level on the Animal Companion table:

Alright, but what's the difference?

Leadership will allow you to take a dragonne as cohort, but you must have a Leadership Score of 14 to have a level 0 dragonne. This can be obtained at 14th level by a druid with +0 charisma, maybe earlier, maybe later, depends on your score really. A 17th level druid could have a dragonne with 2 fighter levels, for instance.

If instead of a dragonne (10th), this 17th level druid takes a pegasus (6th), this pegasus would gain 6 class levels with Leadership, or 4 animal companion levels with Monstrous Companion.

But keep in mind that the GM has the final say on whether Leadership is allowed in his game. A druid that takes Leadership will have two "pets" to control, for a total of three characters. While Monstrous Companion is easier to balance out, since its a single creature.

Not the answer you're looking for? Browse other questions tagged pathfinder-1e feats class-feature animal-companions or ask your own question.

1
Does the animal provided by the Wild Cohort feat count as an Animal Companion?
4
Does this Catfolk build have any redundancy?
6
Unicorn Divine Bond Mount for a Paladin: How do I get one?
5
How does Mammoth Rider levels stack with Druid levels?
4
How many Animal Companions does a Beastmaster have?
3
How to calculate a revised ranger's animal companion's skill bonuses?
11
How can I improve the survivability of the Beast Master's animal companion?
10
Would these adjustments to the ranger archetype Beast Master to help the animal companion be more useful make it too powerful?
4
Hunter Animal Companion(s) clarification
4
Is there a way to cause an arbitrary magical beast to gain character levels in a chosen class?