Is there a standard d10 dimension ratio?

Of the six standard game dice (d4, d6, d8, d10, d12, d20, ignoring labeling variants), all but one of them are regular polyhedra, meaning their size varies in only one dimension (scale). The d10, however, can be independently scaled both radially and vertically. Is there a standard value for the ratio of these dimensions?

Observing my own dice, the ratio appears to be about 1.1 (in other words, the maximum width is about 10% larger than the height), but it would be nice to find a standard value for this property.

Edit: I played around with a few values for the ratio and came up with six semi-reasonable constraints. Overall, the top-right shape seems to most closely match my dice. The ratio is about 1.11, and is defined by the side angle of the kite being 90 degrees. 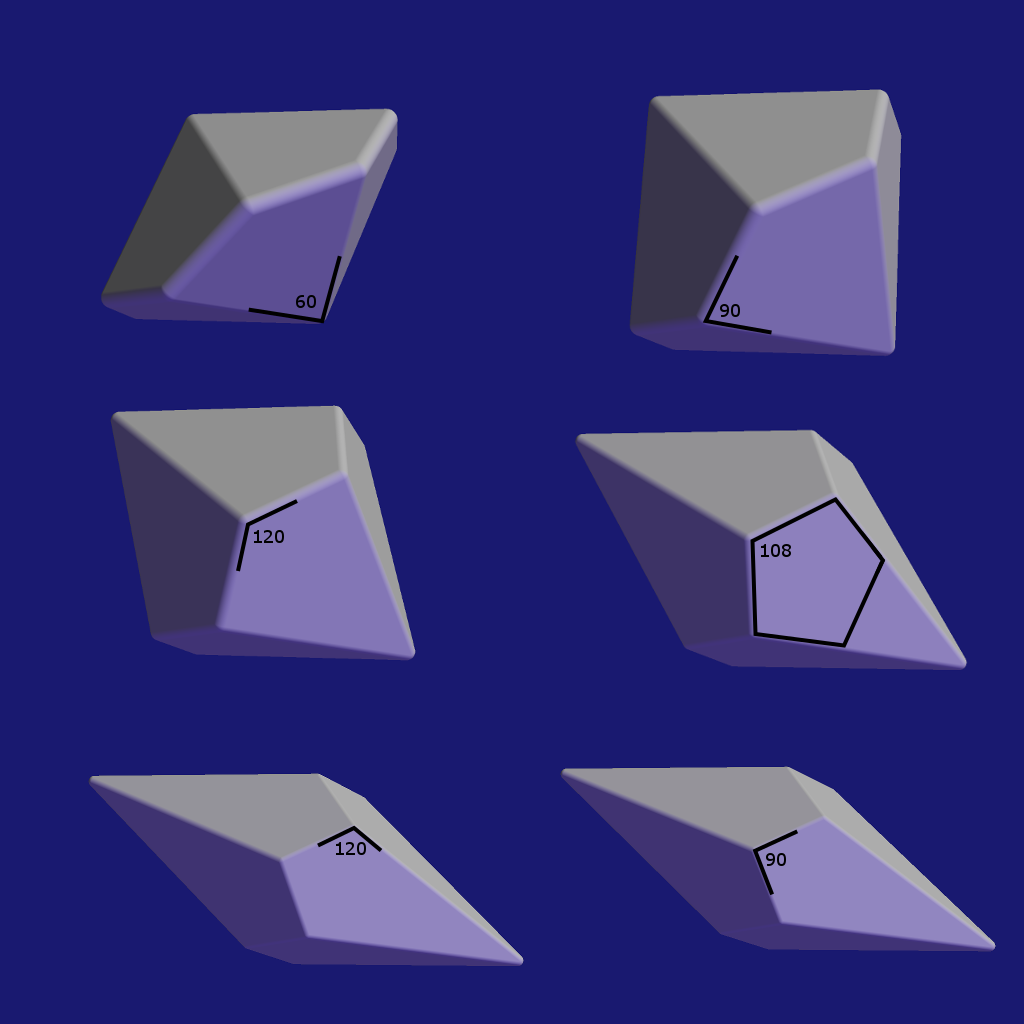 The consistency of d10s that you've observed is much more likely due to Chessex's dominance of the hobby dice market. They have standard designs and moulds for their dice that ensure consistency within their own dice lines.

If you're perceiving a standard d10 geometry, it's very likely because you're looking at different dice all made by Chessex, or made by another company that is following the market leader's lead.

The only standard is that the top face is parallel to the bottom face - or, the table. Any ratio will satisfy this, as long as all 10 faces are identical and the die isn't asymmetrical between the two 5-edge vertices.

Since any ratio satisfies it, I'm going to use my imagination and guess that the one which maximizes the ratio of kite edges to kite area is the one which would be the most likely design standard. This optimized shape is closest to square and easiest to print a readable number into.

I'm skeptical though that there's any "standard", because I possess D10's which are designed more pointily or flatly than others. None of them are very far from the area-maximizing ideal I mentioned above, but they aren't "standardized" or identical.

I also haven't figured out how to calculate the "best" kite shape which can fit as an edge on a truncated pentagonal pyramid, but I do think that there is a "best" one and that it's best for the reason given: It results in the face with the most printable area and least sharp angles, or, looked at another way, the smallest ratio of short-sides to long-sides. Closest to square you can get without breaking the pyramid's geometry (obviously you can't get square). It might be the one which has a right angle between long faces and short faces. I haven't proved it but I'm convinced that there's only one solution to that, and that it's also the same as the solution to maximizing the area-to-circumference ratio.

Later I may improve this answer by measuring my own D10's to see if their middle vertices are very close to that right-angle figure, and maybe by developing those two proofs - which would additionally yield specific proportion figures for the whole die.

Not the answer you're looking for? Browse other questions tagged dice .