Range vs Melee Balance in Starfinder

I hope this question isn't too broad. I'm looking into Starfinder and I'm curious about the balance between Range and Melee combat.

Most Fantasy games are balanced toward close-combat with melee weapons. The rules focus on being relatively close. For example, most encounters start at a position that melee can get an attack in on round 1 and it is up to the ranged fighters to keep distance, as opposed to starting more at range and the melee fighters have to figure out a closing strategy.

So the question is, is Starfinder similarly balanced or does it move that balance out toward the ranged weapons so that the higher tech weapons play a more dominant role in the combat?

There are a wide variety of elements that affects this, but ultimately there are 2 that dominate the range/melee issue.

First, Starfinder does not provide an easy way to "cover" an area with ranged weapons (i.e. to punish foes for moving through that area if they attempt to close to melee range). This makes closing to melee range a relatively trivial matter, unlike what would be the case in real life (where anyone attempting to run forward without cover, or at least covering fire, stands a good chance of being shot rather than reaching their opponent).

Second, melee weapons simply do more damage than ranged weapons, so there is a considerable incentive to close to melee range (especially against foes that would prefer to use ranged weapons). Here's a chart indicating the best average damage per attack (disregarding ammo usage, special abilities, ranges, etc) available at each level for each of the general categories of weapons: 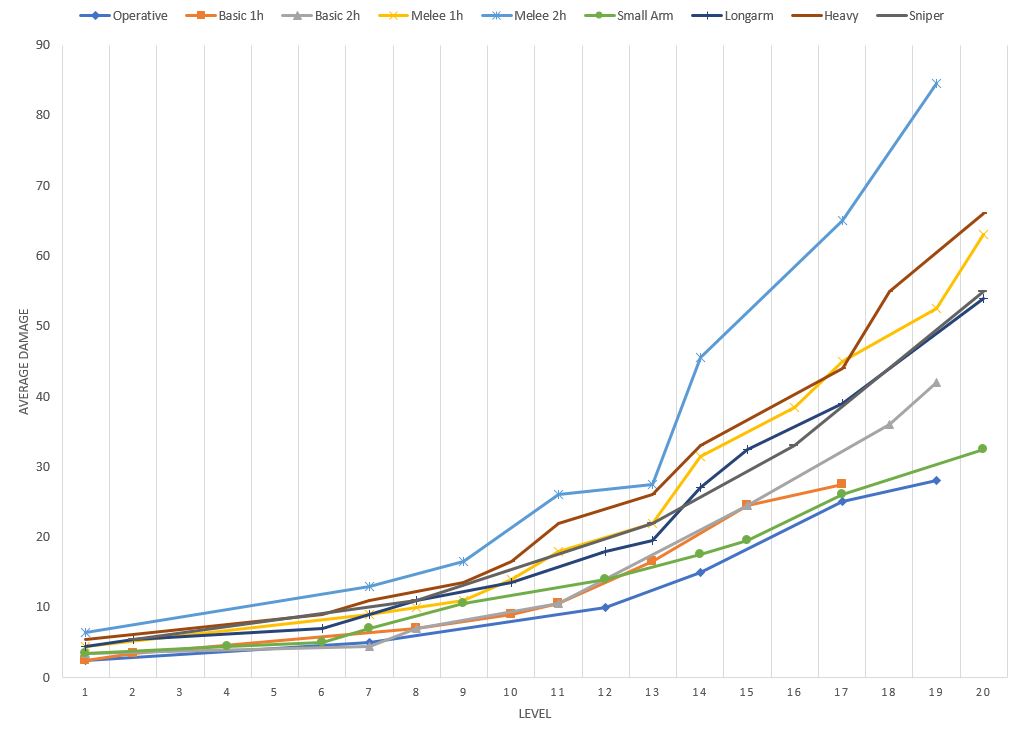 The graph supplied by Oblivious Sage begins to answer a smaller, more specific question; but I wonder if it doesn't answer your question entirely. For example, it does not take into account battlefield tactics which vary widely with factors such as terrain, environmental effects, and surprise.

If a party enters a planet and lands on a mesa overlooking a valley, they may find themselves with a superior, ranged advantage over a small party of space goblins that have camped about 200 feet below. If one or more characters own a Shirren-eye rifle, for example, they can line up shots and fire at a range increment of 250 feet in the same round. Once fired upon, the goblins may be hard pressed to close the distance, as they have to clamber up loose, shale rock (difficult terrain that slows their movement) to get to the heroes.

Take that same situation and add jump boots to the goblins and man their party with their own Shirren-eye weapon wielding sniper and suddenly the encounter's challenge rating balances.

The rules do not favor ranged over melee because combat can literally happen in any environment with an innumerable number of variables/conditions. It might be more applicable to ask if certain classes favor ranged over melee (I don't think there's a hard/fast answer to that, either). What I like about Starfinder rules and their relative simplicity is that you can flex your GM creativity and create balance/imbalance as you see fit to further your story along.

I just played the starfinder society's encounter 1-18, the blackmoon survey. During this encounter, there were two snipers firing at us from on top of a cliff, 1000 or so feet away. None of party had a sniper rifle, and our only person with an even somewhat long range weapon was our mechanic, with an azumith laser rifle. However, the snipers focused fire on her instantly after she landed a hit, sending her down to 3 hit points. She had to play dead in order not actually be dead. by the time we actually made it within a range where we could hit the sniper, we were all down to low hit points. upon which, the snipers ran away. This is one instance where ranged combat will absolutely crush melee. Meanwhile melee fighters can do incredible amounts of damage, ecspecially at higher levels.

All that this shows, is that really depends on the GM and encounter.

Not the answer you're looking for? Browse other questions tagged balance starfinder .

13
Do Starfinder classes have different tiers of power?

11
Would magic 'weapons' make the monk more balanced?
24
Are Strength and Dexterity balanced in Vampire the Masquerade? If not, how can I fix it?
6
House rules for defensive reactions - possible balance issues?
6
Would changing the Artificer spell list affect balance?
11
Are there any balance issues with allowing thrown Javelins to be drawn for free like ammunition weapons?
3
Consequences/Downsides of Allowing Ranged Defence (Dodge) with Fight?
13
Are there any balance-breaking consequences of house-ruling that the Spider Climb spell can be upcast to affect additional creatures?
11
What balance pitfalls result from this house rule modifying the optional Flanking rule?
6
How to balance encounters after the loss of the frontline fighters?
8
Is my Reactive Step homebrew spell balanced?