How to calculate the Levels of an opposing party

My four member party is Level5 and I want to set up another party they have to fight. Last time I did that I created another same level party and they did not have a chance and told me that the CR of 4 Level 5 characters would be way to high. I have read the CR page and know that CR 6 is a challanging quest for a 5 Level party with four member. But could not find how to create a CR 5 group of 4 people.

Could anyone help me out with this?

It depends on how you will build the opposing party

You already know the APL (Average Party Level) of your group, 5, and the CR (Challenge Rating) of the encounter, also 5. That means you will have an Average Encounter, not a difficult or easy one.

To create encounters using NPCs with class levels, the easiest solution is to look into the codexes (npc codex, villain codex, monster codex, etc), as Paizo promptly provided statblocks for them (there is a vast catalog in the srd). You will range from guards to brigands to archmages, all with the proper CR, average ability scores and average wealth.

However, when building your own, there are a few things to consider:

They will have NPC or PC classes

Yes, you have the option to use NPC or PC classes for your NPCs. NPC classes are far weaker than PC classes and thus result in a total lower CR of -1.

How much wealth they will have on equipment

When deciding what kind of gear the NPCs will have, you basically have three options:

A classed NPC encountered with no gear should have his CR reduced by 1 (provided that loss of gear actually hampers the NPC), while a classed NPC that instead has gear equivalent to that of a PC (as listed on Table: Character Wealth by Level) has a CR of 1 higher than his actual CR.

How many of them will be on your encounter

Now, this is the easiest step, all you have to do is check the individual XP of your NPC and compare to the Challenge Rating table.

A quick rule of thumb is to sum their class levels and apply either -1 CR, for PC classes, or -2 CR, for NPC classes. Then adjust the CR by +1 if they have PC gear.

Personally, I would aim at a tougher encounter (CR+2), which gives me room to try stronger npcs (lv1-3s NPCs against lv5 PCs are a roadkill). This would give me a total of 3,200 XP to work with, divided by four would give me a total of 800 XP (CR 3 individually), so they would probably be 4th level NPCs with PC classes. Knowing that PC-geared NPCs would mean they are walking piñata of magic items, I would leave them with NPC gear (no adjustment), so each would have 1,650 gp worth of gear and equipment (magic or not), for a total wealth of 6,600 gp. If all this treasure would be on magic gear, that means the players will get their hands on a hoard equivalent of a 9th level encounter using the Fast Track on the treasure table: 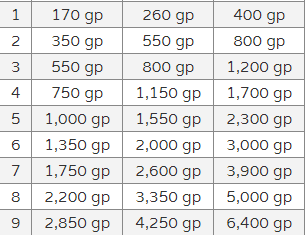 To avoid that, I would probably have them equipped with a few expensive and/or usable gear, like potions, scrolls and one-use magic items. A fraction of that would be spent on actual mundane gear though, like masterwork weapons and armors.

Just a note to keep in mind: Never add a single NPC against a group of four or more player characters, they will wreck her in one or two rounds if they all focus their actions on her.

Not the answer you're looking for? Browse other questions tagged pathfinder-1e cr-calculation .

1
Secure a letter/scroll against opening (low levels)
3
Help ensuring my monk will be useful in and out of combat
13
How do I handle the castle my PCs suddenly acquired, and the shift in game focus it brings?
6
How do I get stoic loners to cohere into a group and care about each other?
5
How to handle the party that doesn't trust you?
5
One of the players in my party does absolutely nothing
26
I'm having difficulty getting my players to do stuff in a sandbox campaign
13
How can I prepare my party to reasonably be able to bring down a prismatic wall?