What is the damage progression?

In pathfinder we know the damage type progression is from "1" over 1d2 to d10s in term of dice types and often up to 16d6 in terms of dice rolled as shown here: Pathfinder Damage Dice Steps

Starfinder I got the impression from the rulebooks does not use all of th possible dice types (d2s as example). So I'm wondering if starfinder has the same damage progression (and I'm mistaken) or if it has a different damage progression?

A d2 is not actually a dice (some may argue otherwise). When a d2 is mentioned in PF books, you are told to use another dice (CRB) or even a coin (DMG) to calculate the odds.

I'm really not sure what prompted you to ask that question (May I assume it's sheer curiosity?), as there are no effects or abilities that increase your damage in steps in Starfinder, even Enlarge Person is nowhere to be seen (yet). Spells that increase your damage for a short period, actually add a specific number of dice to the total damage done, instead of progressing your weapon damage on a chart (like in Pathfinder), such as Supercharge Weapon (+4d6 additional damage).

We could easily say that, for players, there is no damage progression track (yet).

However, if you look at the rules for Designing Monsters and NPC's, you will notice that the progression is nowhere close to that of Pathfinder, where the developers appear to be more worried about the average result of an attack than the progression of the dice being thrown. 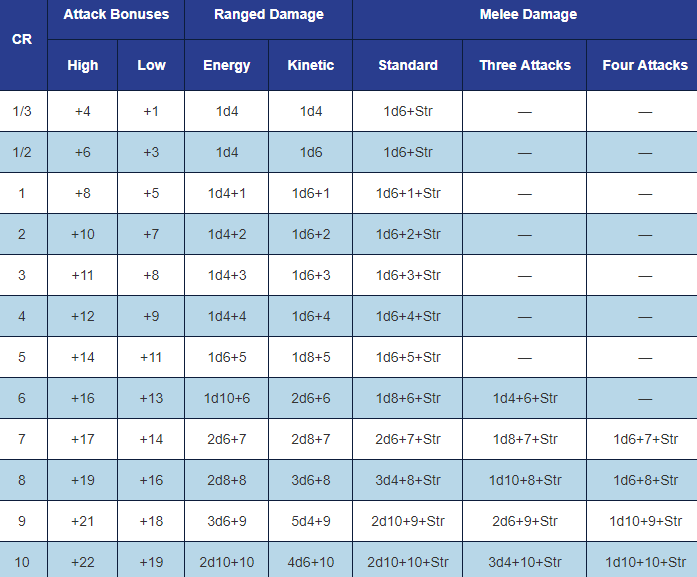 For comparison, I will put the CR and the average damage of both Pathfinder and Starfinder side-to-side (up to CR 10). You will notice that, while Pathfinder has a pretty number that they tell us to follow, when their monsters were designed, that table didn't exist yet and many monsters don't follow it a tall. So we have a number but we don't know what kind of dice combination could give us that number on average. But for starfinder, the table actually has dice values instead of numbers to aim at, which is better for GM's creating their own monsters and encounters. 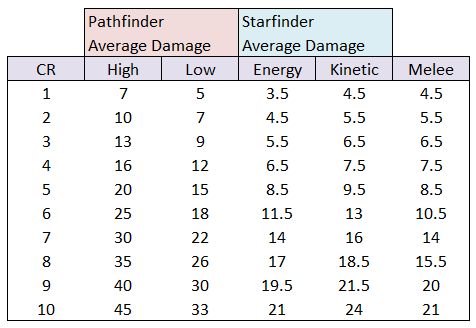 Also keep in mind that, while it may seem that Starfinder monsters deal less damage than those in Pathfinder, that is because I removed the Str Bonus from the formula, as that is a variable that we can't exactly predict and will depend on the creature being designed. If you check Ability Score Modifiers on the Starfinder's table, you will see that combatants will start with a Str Bonus of +4 at CR 1, and go up to +8 at CR 10. But the exact value is left at the designer discretion for each monster. So the average damage per attack is very close between both systems.

Remember the problem where monsters in Pathfinder didn't exactly progress their damage unless the designer paid special attention to that table? That is partially fixed in Starfinder when monsters gain a bonus equal to their CR on their damage rolls.

Similarly, players get a bonus on their damage equal to their character level (ex: level 4 soldier adds +4 to damage rolls), starting at 3rd level. For small arms and operative weapons, this bonus is equal to half your character level. This is called Weapon Specialization and applies to all weapons that your class is proficient with. This mechanic tries to keep player's damage progression up-to-date with their level progression.

In other words, Starfinder uses a more linear progression based on static bonuses, rather than increasing the dice "size" being thrown.

How about weapon's progression based on their item level?

Weapons mostly don't add any static bonuses to their damage, but add a few stacks of dice instead, which the character will then add their own bonuses to it. But for each weapon category, this progression is different, with small weapons being slightly weaker than longarms and melee weapons, while snipers and heavy weapons are slightly stronger. The exact item levels that a weapon progresses to another damage step will vary a lot and we can't really create a progression without listing every specific weapon.

Also, assume that Kinetic damage is always slightly stronger than Energy damage. So when a small arms deal 1d4 of Fire damage, other small arms of the same level will deal 1d6 Piercing damage. There are times when the weapon damage goes down, to compensate for special qualities on that weapon.

To exemplify, I took note of the average damage for small arms and heavy weapons as item levels went up. Sometimes a step of damage shows up at the same time as another, when half the weapons are of one step and the other half of another, I will split the progression.

*The railguns with 9d6 are at odds, because they have an average of 31.5 when every other weapon is way past that value, and that damage doesn't show up earlier on the weapon's table.

Not the answer you're looking for? Browse other questions tagged starfinder or ask your own question.

6
What is the effect of a perfect darkness solar manifestation?
2
Do grenades damage equipment?
13
What are the benefits of owning a computer?
6
What, exactly, are “Deadly Wounds”?
4
Does a Solarian’s Photon mode insight bonus to damage apply to ship combat?
4
Does Damage Reduction Stack in Starfinder
3
Does the solarian weapon’s damage count as magical?
5
Does the Corona Aura of the Solarian Revelation (Same Name) Affect Allies?
5
Can a ship in the Drift communicate with someone outside the Drift?
1
Illusion vs Hologram, what are the pros and cons