How can I make rituals convincing and evocative?

Most LARP systems feature an option for ritual magic; Long drawn out magic scenes involving a variety of actions, words and props, as well as having to fit to specific timings (longer rituals for greater effects).

What is the best way to make such a ritual stand out and be noticed as 'magical', as opposed to mundane rote actions, whilst staying consistant?

Speak / chant throughout the ritual

Use Latin, Tolkien Elvish, or another foreign or created language. Learn a set of specific phrases that are relevant to the ritual that you can chant over and over, as well as other phrases that should be said at specific action points during the ritual. Chanting is a standard part of many rituals for good reason. Be consistent with your chanting, and consider rehearsing your chants by themselves in addition to with the rest of your ritual.

Your chanting and motion should make the ritual feel as though it has a certain rhythm, or beat. This can change over time - speeding up or slowing as the ritual reaches completion - but it is important that everything you do in the ritual follow that same flow.

If you are not using your hands to perform some other action in the ritual, keep them flowing as you "channel" the magic.

Move around, using your body as a conduit for the magic that you are building. This is particularly relevant if you have a large ritual area. Dance and move in tune with the rhythm of your ritual.

Many props can add a feel of authenticity to a ritual. If your game already requires the use of "components," represent them with appropriate ritual props rather than the bare minimum. Use an hourglass instead of a stopwatch. Use as realistic of a scroll rep as you can, if you have scrolls. Cast near, or around a fire. You can use candles to represent the flow of magic, or you can use glow sticks - either tiny, 1" ones, the much larger wand sized ones, or even the normal 6" sticks. Drums and other percussion instruments can help immersion a great deal.

Wear appropriate costuming for your ritual. In some rituals, dark, rune-covered robes would be appropriate. In other rituals, it might make more sense for you to wear a fur mantle and a bone necklace. Base this off of your character's culture as well as off of the type of ritual.

If you need to use a circle, fill it with runes. If you can't use chalk, make or purchase a cloth circle that already has runes embroidered on it. If you are going to be particularly mobile, make sure that the general area that you will be performing your ritual in is still distinct from other areas.

Base the Ritual on the Effect

Base the script for the ritual upon the effect you are attempting to cause. As an example, if you are casting a ritual to render a shield indestructible, role-play that you are magically reinforcing the shield. If you are enhancing your companion and granting him great strength, role-play that you are infusing his muscles with magical power. If you are destroying the magic within an item, role-play pulling the magic out of it and burning it, or destroying it with a hammer that you formed during the ritual.

In most rituals, it makes sense to role-play the act of harnessing magical power, building it up, or storing it in an item. Figure out what makes the most sense to be common for your rituals, and practice these parts the most. If you perform these parts well, the ritual will already be immersive by the time that you start the custom part of each ritual. That said, this does not mean you should begin every ritual the same way - you can have custom elements at the beginning and end and the common elements in the middle.

If you don't practice, your movement, chants, and other actions may seem unnatural. Practice performing common rituals or any bigger rituals that you might expect to perform.

I would avoid things like fake blood and simulated animal sacrifice. Not because of any qualms with their use, but simply because they are very difficult to pull off in any sort of realistic fashion and they tend to be too classical of "over the top" bad guys to be meaningful (at least used more than once). Especially since you might be doing this with a group of players just to enchant your weapon, rather than having a bunch of necromancers out in the woods doing it. High ritual isn't just for NPCs!

You might try borrowing elements from ceremonial magic. There's a lot written there that can be adapted. Robe designs, how people move around a ritual space (e.g., in Golden Dawn practices), etc. You don't have to replicate these exactly (and doing so would actually detract from the dramatic effect in many cases), but it can still be a worthwhile starting point.

That would encompass one style of ritual. Other ideas might include something more frenetic like dancing ecstatically in a circle (candles definitely not advised and robes get in the way) or putting some sort of rhyme to song. Basically so long as whatever it is gets done with intensity and conviction (essentially believing that you are actually doing it, not faking it), that will communicate to anyone watching or anyone participating.

If you have access to a library (college for example), the History section (or Occultism section, but it depends on the college; I don't think it is common in the US, where as there is often one ine Europe universities) often have books about witchery, and descriptions of actual rituals. Pick a few of them, and there you go.

Quite a few of them talk about animal sacrifices and blood-drinking, but you can avoid them if you want. But if the group you have is mature enough, you can make fake blood out of juice and flour. We usually use cranberries + lemon juice (when people doing the ritual are good people) or grape juice (when people doing the ritual are evil people); this way, good people drink it reluctantly while evil people kind of like it ;)

Have one person direct the ritual, knowing what to do at what time; either an organizer, or a PC. The instructions should be pretty simple, so that he can convey them to the others, but have elements that he is the only one knowing, so that other participants fell some mystery. If you want the whole group to feel the mystery, give each of them only a part of the ritual, but not "one knows the incantation, one other the circle, one other the positions", rather "each knows one part of the incantation, one part of the circle, etc". Use a sandglass for measuring the time. We have a big antique one measuring around 5mn, so we use rotations of it to measure the parts of the ritual.

Since they will be real ones, they will feel magical enough, don't worry. Usually, we even make a rehearsal beforehand to ensure it is not too much, as some of them can feel quite disturbing, especially at night and/or in a forest (but that could be the effect you are looking for). And pray that they don't actually work ;)

In our LARP all the really good and intense rituals were done at night:

Example: I update my answer with some example pictures. The following photographs show the funeral ceremony and cremation of a respected lord, with a druid calling the gods in his favor. No longer visible: on top of the pyre we had placed a man-sized dummy wrapped in white linens, which was carried in on the shields of 4 warriors. 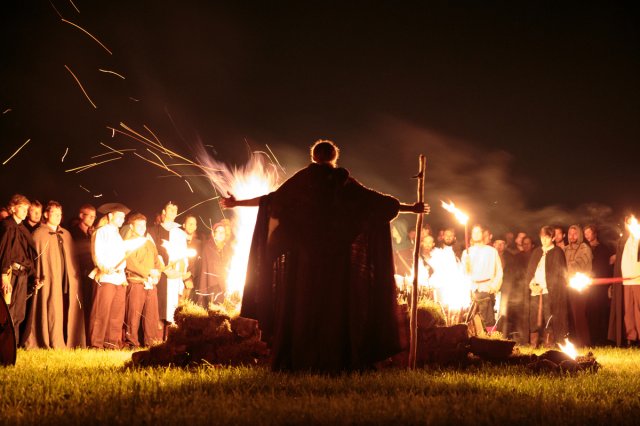 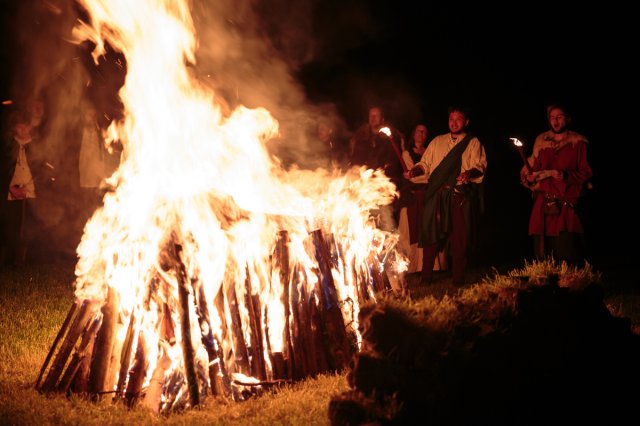 Special effects! Seriously, look at how special effects for movies or better yet for stage plays are done. This will give you a ton of good ideas. Speakers with sounds, lighting (black light, glow sticks, red filters), and good acting on the part of the crew all add a lot.

Note: fire works are out. They are not safe as part of a LRP.

Not the answer you're looking for? Browse other questions tagged rituals larp props .

13
How can I use lights at night without breaking immersion?
19
How do you make 4th Edition Rituals more accessible?
5
Do travel bonuses from the Shadow Walk and the Phantom Steed rituals stack?
7
Where can I find player available rituals for creating undead?
9
Can you trigger Wild Magic Surges with rituals?
6
What do Rituals of Blood and Night (orc magic) tax?
2
Can the rituals in tribe books be taken by anyone?
3
Can Homunculi, Undead or Other constructs be used to cast Occult Rituals?
6
Clarifications on how rituals work
13
How can I get latex-like finish on my foam sword, and avoid biggest pitfalls with applying latex at home?