How can I bring in new players on the fly?

How can I smoothly bring in a new player and character with little or no notice? I run a semi-public game shop pathfinder game, and I sometimes have people show up to play I hadn't planned on. Often enough they have a character, but that character may not mesh with the existing party or setting. How can I smoothly make the necessary character adjustments and bring the player on board to the game? I can handle the story adjustments, and my existing players know and are somewhat prepared for accepted new players on the fly.

I didn't have an answer for this, but then I read this great answer by Paraic Mulgrew and it reminded me of somethign I learnt in college: 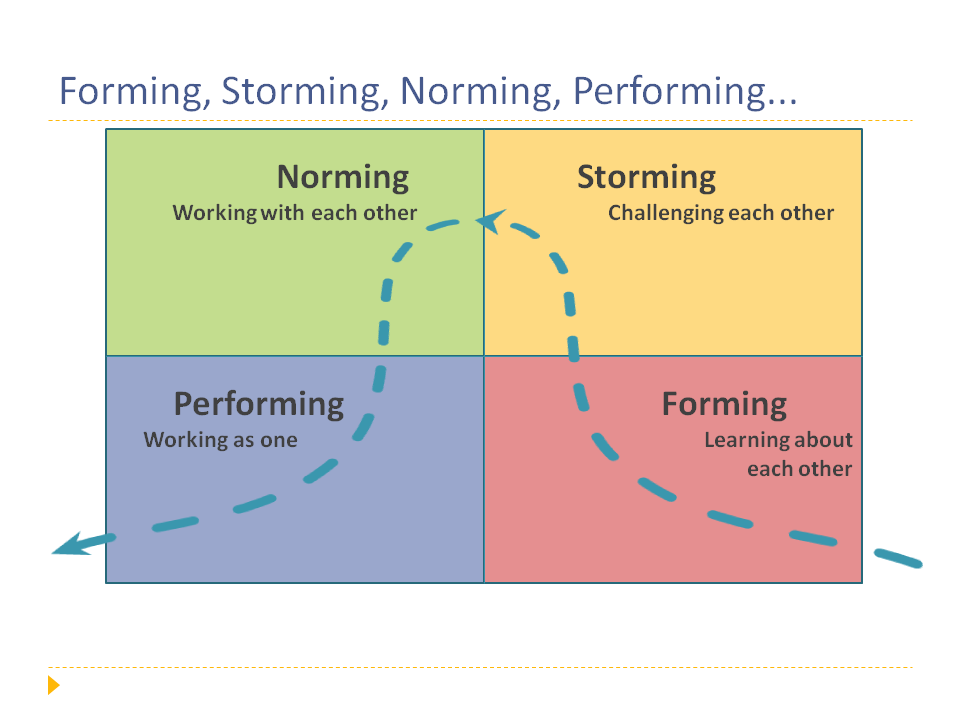 It's the tuckman model! Yay!

The Forming – Storming – Norming – Performing model of group development was first proposed by Bruce Tuckman in 1965, who maintained that these phases are all necessary and inevitable in order for the team to grow, to face up to challenges, to tackle problems, to find solutions, to plan work, and to deliver results.

I have a "Welcome to the group" document, which I prepare before every new campaign. I give copies to all players, and when a new player joins, I review the document to ensure that it still describes the campaign accurately.

I would recommend that you suggest some minor justifications for the character and his/her background that places them in the setting. Using character backstories (as proposed by multiple gaming sources) will give you a deep source of rational for where this character may have come from, no matter how exotic the build. That should suffice for the first, impromptu session.

Afterwards, I would talk with the player and see if they are interested in attending regularly. If so, take some time to coordinate a better backstory that furthers the group's story line. If their character seems too exotic for the mood/tone of your game, now would be a good time to address the issue with the player. Then they can make a more informed choice as to whether to continue to attend.

If the character is just a bit quirky, use that fluff as a storyline springboard and rationize potential relationships to the campaigns villians, organizations, and infrastructure.

In short, roll with it the first game using pre generated backstories and then afterward, work with the player to invest them into the game is a more seemless manner.

You have to take this into account with your campaign background. We ran a multi referee campaign where characters where allows to roam from adventure to adventure by different referees called New Gallo. One of the premises of this was that each session had to start and finished at the Port of New Christina. New character arrived on the ship from the Old World and had to bring everything the needed with them. Resupply was almost impossible, it was either in New Christina or the surrounding wilderness or it may takes weeks or months to arrive. I think a similar idea would work for any location like a large city or trading post near a large forest with ancient ruins (Pavis springs to mind).

We did set specific rules around character creation at the start, but these where reduced over time (although no evil was never dropped).

First, I'd say it mostly depends on the level of your campaign. Since high level characters can have a more profound impact on your plot & encounters they are imho much more difficult to account for, especially if they are spellcasters. So at some point you may run into a level range where conflicts and extensive modifications are unavoidable.

Anyway, I would suggest several things that could help you handle such a situation.

Ideally, you have at least 20 to 30 minutes to take the new player aside and in a few words explain the social contract of your group. Explain how you run your game, what you and the other players expect in terms of behavior and style of play and answer any questions he has. Also give him a run down about the agreed on house rules at your table.

This is also the perfect time to start adapting the character, since at this time you can focus on the new player and help him with the mechanical aspects or the background.

You mentioned that the eventually existing characters "may not mesh with the existing party or setting", so I assume that the difficulties lie primarily with either the type of character ("But I want to play an evil, greedy assassin that is out to rob your followers of Pelor!") or with his abilities ("What do you mean I can't play my divination specialist in your mystery investigation campaign?"). In either case I think the only option is to ask the player to change the character type/alignment/background according to your suggestions and/or remove the problematic mechanical elements (feats, spells, items, ...).

In my experience it's difficult to introduce a new player to the action right from the start, but in this case this is actually a minor advantage since that gives the player some time in which he can modify his character. Ideally, while doing so the player should also write down the shorthand for each feat's/spell's/item's rulebook behind each rule element, so that you can quickly check if the modified character is okay or clashes with some other restrictions.

However, not always the player is able or willing to make the modifications without basically redoing the whole character and losing lots of effective game time. In that case your emergency measures would take over.

If the situation you describe occurs quite often (e.g., more than once every 10 games) I'd say it'd be a good idea to build a stack of pregenerated characters for exactly such players. Because the characters were built by you, there is no risk that they have an item/spell or something else that busts your plot or overly simplifies your encounters, and there is little risk that the characters' background or personality conflicts with the other players.

Start with Freud's "Tell me about your mother" GM to character as a person (as opposed to a sheet of numbers). Once you get the chuckle over slide into asking things like the character's potential background, it doesn't hurt to phrase the questions in a way that leads the answer like "Do you think your fighter was more of the sort to work his way up in the city/royal guards or army... or more of the type to fight to protect small villages across the countryside in need of help? That alone lets you peg their character as something military/militia or something mercenary/avenger hero type Twist things around for different classes to make the questions relevant. in the span of 5-10 minutes you go from "I like swords!" to an interesting character you can weave into the plot tapestry going forward to really draw people in with one of those campaigns that skip the nameless evil to something everyone wants to be involved with. try to squeeze in questions about things like goals and/or motives when applicable & don't hesitate to give out something minor that's either so trivial as to be irrelevant (but cool), or likely to be replaced soon enough like a Masterwork+1 doodad relevant to the backstory created in those 5-10 minutes.

If you do the leading questions right, you can pretty much drop them seamlessly into the path of your group without the even realizing that you just had the shape their character into the shape you kinda needed plotwise.

If its a public game where people can join andl eave at will, you need to make every game episodic. Beginning and ending, with a story arc for longtime players. End at a point where it makes sense for players to pick up a stranger. Inn, church, popular adventuring dungeon etc.

If this is a pickup game and people are bringing characters, don't force the guy who obviously doesnt want commitment to commit. Roll with the punches. Maybe he's a foreigner. Make him tell you why he's there with an on the fly background. Two sentences i always ask at conventions.

Not the answer you're looking for? Browse other questions tagged gm-techniques or ask your own question.

138
How do you help players not focus on the rules?
17
How can I encourage my group to become more well rounded?
46
How to get out of a story deadlock
17
How do I help my players figure out how to stay alive in a realistically-deadly sandbox campaign?
34
How can I bring a player back to immersion and away from the distraction he brings to the table?
2
How to increase difficulty on the fly?
12
How should I deal with metagaming?
32
How to explain to a new player that metagaming is encouraged in this group
49
How should I handle players who ignore the session zero agreement?