When using a battlemap, can a lightning bolt be directed between squares to affect both?

Lightning bolt is listed as having a width of 5 feet.

When using a battlemap, can the line of the spell be directed between squares to affect creatures on both sides with full damage?

Does Lightning Bolt affect everyone in its line of effect? suggests this would be true for Pathfinder rules. Its answer suggests that even if the lightning bolt passed a tiny corner of a square - the creature would take full damage. Does this hold true in 5e?

There are 4 different rules in 2 books

XGtE contain two options, Tokens and Templates, while DMG has a rule that would make a lot of sense, but it is limited to circular effects.

you can lay it on the surface; otherwise, hold the template above the surface and take note of which squares it covers or partially covers. If any part of a square is under the template, that square is included in the area of effect.

It is very easy to place such a template to partially cover two adjacent squares.

This method only allows for 8 directions, and none of these makes it possible to hit two creatures who are in front of the caster.

Yes, using the half-squares method from the DMG

Unfortunately the DMG has nothing about lines, but I see no reason why this could not be applied to any shape.

If you target the center of the edge between the two squares you want to hit, both squares are covered exactly half, so both are effected.
It does not matter if you start the line from the center or the corner (C: Caster, E: Enemy). 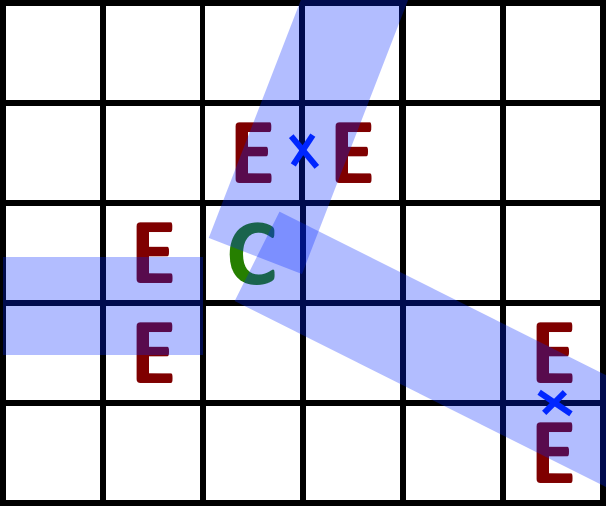 Hitting two adjacent creatures with Lightning Bolt might go against designer intent, however it is necessary to keep it competitive with the much more flexible Fireball. Except in very narrow hallways, Fireball wins in number of affected creatures 95% of the time.

The DMG (p. 251) seems to say that partially covering a square or hex with a line is not allowed (emphasis mine):

The area of effect of a spell, monster ability, or other feature must be translated onto squares or hexes to determine which potential targets are in the area and which aren't. [..] If an area of effect is circular and covers at least half a square, it affects that square.

The notion that only circular areas need this kind of caveat supports that the intent is that only full squares or hexes can be targeted. That would mean that a line 5ft wide can only target one of two creatures standing side by side if fired from in front of them. Xanathar's Guide (p. 87) expands on areas and diagonal lines and it supports this interpretation.

That said, your DM can decide to allow targeting between squares/hexes. I would rule that covering at most half of a medium sized or smaller creature's space gives them advantage on the save.

8
When using the Template variant rule from Xanathar's Guide to Everything, do 5 foot wide Lines actually affect a 10 foot wide row of grid squares?
8
Does Lightning Bolt affect everyone in its line of effect?

14
How does the Chain Lightning spell target?
13
Do spells with area effects affect targets that have been swallowed whole?
9
What is the area affected by Gust of Wind on a grid?
7
How tall is the Lightning Bolt spell?
25
What does "within 5 feet" mean in the description of the Call Lightning spell?
6
Where does a Javelin of Lightning land when it misses its target?
29
Does my improved version of the Witch Bolt spell make it less of a "trap" choice, while keeping it unique?
6
Does a Javelin of Lightning allow a cleric to use Thunderous Strike?
5
Are the targets of spells cast from Wand of Wonder always determined randomly?