How can I model this "Party Draft Pool" ability score generation method in AnyDice?

I'm looking to model an alternate to the "4d6, drop the lowest" mechanic for determining ability scores.

The proposed system works as follows:

(I am thinking this is a good way to have fun rolling dice without the inter-party balance issues of straight 4d6, drop 1.)

Obviously for modeling, this can be simplified:

How do I model the probability distribution of the above in Anydice? I'm getting hung up on the syntax.

Overall this seems to benefit the first player, but it depends how you measure it.

I thought I would model this programatically as it will be a bit more flexible than using AnyDice. I've written a script which carries out the process a large number of times and averages the values for each player.

The main difficulty here is how you actually interpret the data: what makes one array of ability scores better than another one? There are multiple ways to judge this. I'll include some values for different methods.

I've included my horrible amateur code here so you can try it out.

After a bit of finagling, I wrote an anydice calculation that should produce the probability distribution of the highest absolute ability score from this method. Unfortunately, it doesn't actually run on anydice.com due to a low runtime limit; I don't know if a local equivalent exists that could be allowed to run longer and obtain those results.

If it is possible to run with a lot more efficiency or runtime, this calculation should produce probability graphs for each player's highest and total scores. Similar graphs could be produced for second highest, third highest etc.

While, as I mentioned, I haven't been able to run all those calculations, a few points are immediately obvious. First: Player 1 will always have the highest "primary stat", but the lowest "secondary stat", as well as the largest variance between their highest and lowest stats. That would lead Player 1 to perform best at a class where their primary stat is pretty much all they need. On the other hand, Player 4 would have the lowest primary stat and the highest secondary stat, as well as the lowest variance between highest and lowest stats, performing best in any class with their two best stats very close in importance and/or where their dump stat needs to be a little higher than terrible. Players 2 and 3 would be between them.

Overall I'd say Player 1 gets the best out of it; their first and third highest stats are the best, with their second best on the low end, while Player 4 has the worst first and third stats, and a higher second seems unlikely to make up for that. This might be subjective, but to me there's a very major gap between the values of the highest 3 and lowest 3 ability scores, so Player 4 having the best 4th and 6th highest scores has almost no impact in my opinion.

Finally, in an attempt to get some useful graphs at all, I made a simpler simulation for just the "Highest stat". First I tried checking distributions for a few alternatives. The one that most closely ended up matching the distribution of "top ~17% scores" on the normal rolling system was the one called "skewed high distribution", so I made this calculation intended to estimate what scores each player would get for their highest score. Keeping in mind that I just eyeballed the distribution for that, it shows Player 1 with over 70% chance to have their highest score be 17 or 18, while Player 4 has over 70% chance for their highest score to be only 15. Checking the alternative distributions gives similar results: Player 1 usually has at least 60% chance to get a 17 or 18, while Player 4 has less than 1% chance.

For an alternative measure, I've done some math by hand to generate a "typical" pool, i.e. probability of generating a score * 24 attempts = expected number of that score, and assigned them in accordance with your procedure to get these results:

Going at the calculation from this angle, we can see that the advantage Player 1 gets in their Highest stat is significant since there's likely to be only one 17 or 18 score in the entire pool, but differences between players in the second through 4th stats is minimal because 11-14 are very common in 4d6 drop 1. There is an even larger disparity in the lowest stat because of a flatter tail, but a "dump stat" is commonly desirable and I doubt the other players would be unhappy to move points from their lowest to their highest stat.

This is not the answer to your question because I'm not sure how this could be done using Anydice, but I know that it can be done with Excel pretty easily.

I've quickly thrown together this spreadsheet which will simulate the 24 x 4d6 (drop-the-lowest) rolls, and then assign the ability scores to the players in "snake order" and calculate their respective ability mods.

PS. The randomised rolls will update every time that a cell is refreshed, might have to download the sheet to do that. You can type ctrl+R to refresh without updating a cell. 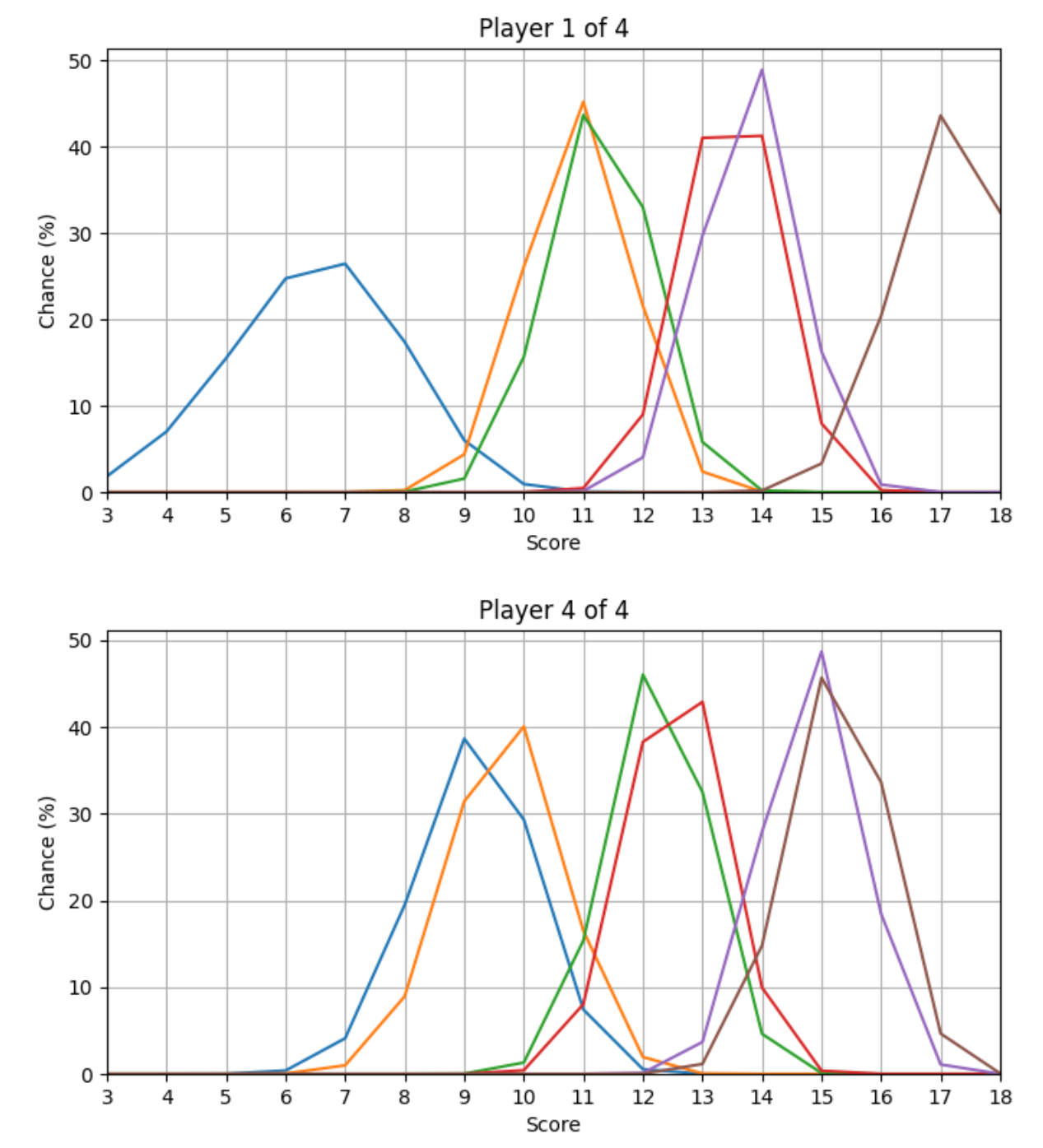 As with the other answers here, I'd say the first player has the most advantageous position, since a high top score tends to help more than a low bottom score hurts. I like OP's commented idea of flipping the 3rd round against the first player, so the first player only gets the highest score in the 1st and 5th rounds.

This was computed using my hdroller Python (heh, "snake draft") library, which uses combinatorics and dynamic programming to find the exact result in just seconds. You can try this computation (including tables of mean arrays for 1-6 players) in your browser using this JupyterLite notebook.

Not the answer you're looking for? Browse other questions tagged dnd-5e ability-scores statistics anydice .

52
How can I avoid problems that arise from rolling ability scores?

14
How can I model Burning Wheel probabilities in AnyDice?
5
Modelling rolling for stats in Anydice
11
How can I use AnyDice to simulate rolling 6d6, and dropping the 2 lowest and 1 highest dice?
4
How can I model the probabilities for this mechanic involving cancelling out dice pools in AnyDice?
10
How can I calculate the sum of 2 random dice out of a 3d6 pool in AnyDice?
1
How can I model the probabilities for highest and lowest of opposing dice pools?
11
Rolling 7 stats of "4d6, reroll 1s and 2s, drop the lowest number" and dropping the lowest sum in AnyDice
4
Modeling a system where you roll Xd20 and take highest, plus the second highest if the first one is a critical, etc
5
Anydice: Counting Successes and Rerolling Failures In Dice Pools
10
How strong is this stat generation method? Roll 20d6, drop 2 lowest, assign groups of 3 dice for stats