Tom Moldvay's adventure module Castle Amber (1981) for Advanced Dungeons and Dragons has two ideas that seem to have inspired Magic: The Gathering. The first is series of colored rooms in the east wing that are labeled blue, white, green, black, and red. (There are no rooms of other colors, but there are other rooms. So. Many. Rooms.) These five colored rooms correspond to the colors of magic in Magic: The Gathering. (Depicted below because, hey, pictures! Yay!)

The second point of interest is that, so far as I can tell, Castle Amber contains the first mention in the D&D corpus of the black lotus (that made its way at least into D&D 3.5, later editions not being my forte). The effects of the black lotus Castle Amber describes are only mildly different from the effects of the Magic: The Gathering card of the same name: "The black lotus is a rare, highly poisonous and highly magical plant. Its fumes can bring death or ecstasy, depending on how the black lotus dust is prepared" (17). Likewise, the Magic: The Gathering card Black Lotus is capable of bringing sorrow to the card's player's foe and joy to its player: 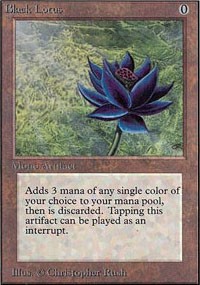 Searches for Magic: The Gathering creator Richard Garfield and Magic: The Gathering itself in conjunction with Castle Amber turn up no immediate results, and no connection's mentioned in, for instance, Chalk's Generation Decks (2017), a Magic: The Gathering history of sorts, but I've not read any of the remainder of the body of work published about Magic: The Gathering nor have I read many of the assessments of how role-playing games' early canon influences the wider world of gaming generally and if that would include the influence of an early 1980s D&D adventure module on a fantasy-themed trading card game published a decade and a half later.

To be clear, I'm totally aware that other sources could have served as the inspiration for the five colors of Magic. (I mean, it's just a series of colored rooms that happen to correspond to the other game's colors, and those could've just as easily have been instead brown, pink, purple, orange, and yellow… although that would've been pretty gross.) I also know that the lotus has been purported to possess magical powers since (ahem) antiquity. That's why I'm not asking for speculation: cases can be made based on the evidence above either way all day. Instead, I'm curious if this avenue of research has already been traveled.

Note: I know that this is potentially a crossover question, perhaps even meriting migration to another Stack, but I figured there'd be as much chance of a history of Magic: The Gathering mentioning Castle Amber as an influence as there would be a history of role-playing games' early years mentioning the influence of Castle Amber on the now-far-bigger trading card game industry.

It's possible it may have had some influence, but it's very unlikely to be a direct inspiration.

To respond in order, while there are five colored rooms, only the red room really corresponds in any way with its flavor in Alpha. The Red Room is indeed fire-themed, but the Blue Room is empty, the White Room is ice-themed (while blue is the ice color in Alpha), the Green Room is a reference to Arthurian legend, and the Black Room just has a trap door. Moldvay likely based these rooms' decor on the 19th century fashion of creating rooms themed around a central color. The White House, for instance, has a Red Room, a Blue Room, and a Green Room. Additionally, arranging your color pattern around the three additive primary colors plus black and white is not so fantastically innovative as to truly need a basis.

To your second point, Black Lotus has its own legacy separate from either Magic or Dungeons and Dragons. Black Lotus was invented by Robert E. Howard, appearing originally in two different Conan the Barbarian stories from 1933: "The Tower of the Elephant" and "The Slithering Shadow." One is shown to be a deadly poison:

[The powder] was made from black lotus, whose blossoms wave in the lost jungles of Khitai, where only the yellow-skulled priests of Yun dwell. Those blossoms strike dead any who smell of them. - "The Tower of the Elephant," Robert E Howard

And another shows it to be a powerful drug:

You have heard of the black lotus? In certain pits of the city it grows. Through the ages they have cultivated it, until, instead of death, its juice induces dreams, gorgeous and fantastic. - "The Slithering Shadow," Robert E Howard

So there's nothing in Castle Amber that uniquely connects it to Richard Garfield. It's possible, maybe even probable that Garfield played it (it was a pretty popular module after all), but there's little to no evidence I can find that it was any particular influence over his design of Magic the Gathering.

Not the answer you're looking for? Browse other questions tagged published-adventures history-of-gaming dnd-becmi or ask your own question.

9
Module with a mage's tower that had miniature exercising golems
5
Making the most of Adventure Bonds
11
Should Castle Amber be renamed Castle Monty Haul?
13
How were PCs expected to survive this encounter in Castle Amber?
11
Is this rule in Castle Amber necessary?
10
What was the first adventure to use boxed text?
10
Who or what is The Vampyr?
20
Looking for a late 80's (or possibly early 90's) D&D one-shot adventure based around a bar room brawl
3
What is the earliest example of a variant monster in a published D&D adventure?