Nowadays I primarily play online and I've been finding that Google Docs is probably the best resource for handling mapping needs. It's even robust enough that it can be made visually appealing.

If I naively try to run Ultimate Campaign's kingdom-building rules on square rather than hex tiles, simply by replacing the latter with the former and keeping all other measurements the same, will I run into any problems, assuming I'll be making my own maps?

You won't run into many problems

The game separates the map into hexes because hexes make it easier to use the overland movement rates. Thus characters can travel on any direction on the map by measuring the number of hexes they can move in a single day.

Converting the map to squares won't have any effects on the map itself, but it will affect movement. A normal traveling day—assuming that everyone has a a speed of 30 ft.—means that everybody moves 24 miles (2 hexes) after about 8 hours walking.

If you convert the map to squares, the distance they travel won't change, but how many squares they can walk on a single day might change drastically depending on which direction they are traveling. West–east or north–south movement will be straightforward, but NE–SW or NW–SE (diagonals) movement will cause issues that need addressing.

There is an excellent article explaining the mathematical differences between hexes and squares for boardgames. The actual easiest solution, though, is to use a ruler to measure distance traveled rather than counting squares.

For this to work, you have to make sure that your squares are the same size (1 cm or 1 inch or whatever). Then use a ruler to see how far the party travels each day, instead of counting hexes/squares.

This solution also works when the party's movement is not divisible evenly by 12, like when a party member has a speed of 20 feet that reduces the entire party's overland movement from 24 miles down to 16, causing the party to move 1.33 hexes per day—an annoying hex-and-a-third. So every three days traveling at Spd 20 the party crosses 4 hexes. 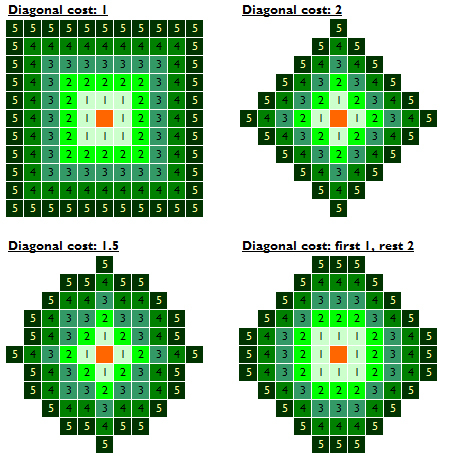 Another, much simpler solution, is to simply ignore diagonals, and thus players move diagonally the same way they move horizontally or vertically. This makes traveling less realistic but won't have to convert distance nor have to apply a ruler to your game.

"How does all of this affects Kingdom Building?"

It has very little effect, the Kingdom Building rules simply divide the kingdom size in squares because the game assumes the party will explore that area before claiming it.

Do note that a square has only 4 sides (and 4 diagonals) while a hex has 6 sides, this means you will only have trouble when claiming areas near water:

Because any new hex you claim must be adjacent to an existing hex in your kingdom, if you want to claim land beyond that water (such as an island), you must first explore and claim the intervening deep water hexes.

Other than that, any mention of adjacent in the rules is talking about the city grid, which is already somewhat divided in squares, 9 blocks of 4 squares each for a total of 36 squares. So, this won't affect your game at all. 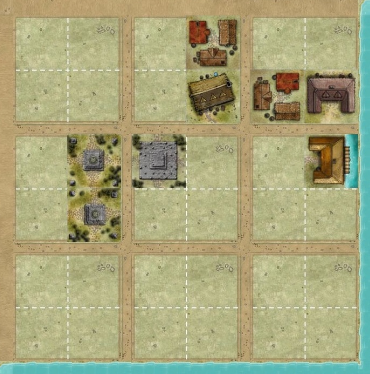