One of my players is a large creature with a 10 ft reach who is also using a lucerne hammer (10ft reach).

He mentioned grappling with it and I was hoping for verification.

How would grappling with a reach weapon on a reach character work?

Would he have to drop the weapon, is he unable to initiate grapples at adjacent squares?

Edit: I wanted to clarify, it isn't that he wishes to pull an enemy to him, I k ow during a grapple you move into your opponents square.

My concern is whether or not he can initiate a grapple while holding a reach weapon and being a large creature as well as what ranges he would be able to do so at and whether he can do so while still holding it or does he have to drop the weapon.

For reference: reach weapons state you cannot attack someone adjacent to you while using it.

Initiating a grapple is considered a melee attack action that deals no damage.

The players has a feat called shortened grip that allows the adjacent attacks with reach weapons.

Complete Warrior includes a mancatcher, an exotic weapon that can automatically grapple targets and has special rules for grappling at a distance (since it has reach).

It has always been my impression that, the mancatcher aside as a special exception, grappling required an unarmed strike, and could not be performed without a free hand. The definition of handedness notes that

A light weapon [...] can be used while grappling,

which strongly suggests that other weapons, like a lucerne hammer, cannot be. This is referring to the rule under grappling for attacking an opponent, which says

You can make an attack with an unarmed strike, natural weapon, or light weapon against another character you are grappling.

You can’t attack with two weapons while grappling, even if both are light weapons,

which again suggests what I was saying earlier about unarmed strikes, as does the simple fact that successfully grappling deals damage as if you had performed an unarmed strike.

Nonetheless, I cannot find any explicit mentions of a free hand being required for grappling, despite being fairly confident they existed. I will continue searching for that, but in the meantime, I only have this circumstantial evidence. After all, the mancatcher does more than just allow you to grapple with it, since it has automatic grappling and a fancy trip-like grapple option, and the “can be used in grappling” might just refer to attacking with the weapon, rather than just starting the grapple. So all this evidence is circumstantial, and could be explained a different way.

But if you are convinced, please note (as @HeyICanChan reminds me) that a character can perform an unarmed strike without necessarily using their arms or hands, so they can do it despite having weapons in hand. As @WannabeWarlock points out, this isn’t at all unusual in real life, either—leg-based takedowns while pummeling with arms and fists is a pretty typical move in mixed martial arts, for example. Doing it with armor and a big weapon in hand, okay, that’s harder, but these are fantasy heroes, so whatever. But the big, important thing here is, even if you do this, you are still using an unarmed strike. That means none of your weapon’s properties—like reach—apply.

If you are unconvinced, then the rules basically don’t really cover grappling-at-a-distance, so you’ll still have to houserule something. I suppose you could use the mancatcher rules, if you want, but that would seriously dilute the mancatcher’s value in my mind. Or you could just use the rules as-is, and ignore the weirdness where, for example, your character just instantly moves into the target’s space regardless of the distance between them.

To start a grapple, you need to grab and hold your target. Starting a grapple requires a successful melee attack roll. If you get multiple attacks, you can attempt to start a grapple multiple times (at successively lower base attack bonuses).

Since it does not mention the need to attack an adjacent target, a reach weapon works normally.

Note that per Step 4 rules: to maintain the grapple for later rounds, you must move into the target's space. With a reach weapon, this might pull you through multiple squares and could trigger additional attacks of opportunity.

Otherwise, it is treated as a standard grapple attempt. If your reach weapon is not a light weapon, you will not be able to attack with it during the grapple. If you play League of Legends, I'd basically view it as a Thresh hook -- you hook someone with your reached weapon and yank yourself over to them.

It depends on the weapon being used. For a typical Lucerne Hammer, there isn't an arm large enough to 'hook' a creature and pull it to you. 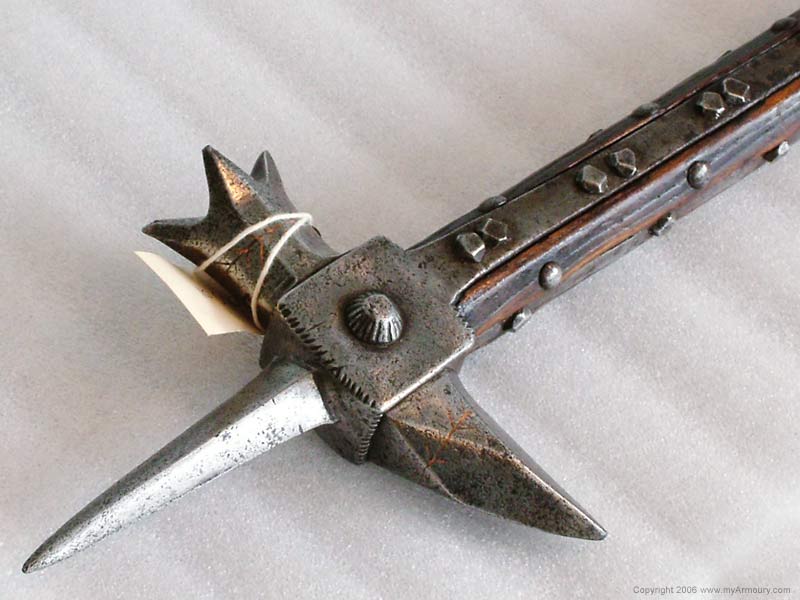 I would allow it with a weapon similar to a scythe:

However after pulling the creature to you, you'd have to make a physical grapple to restrain it. You only need one hand free to attempt a grapple, so he would not have to drop the weapon, but would be unable to use it effectively in one hand.

Since the character has a 10 ft reach he could grapple any creature within 10 ft with a free hand.

Not the answer you're looking for? Browse other questions tagged dnd-3.5e grapple reach or ask your own question.

15
Can reach weapons attack and receive attacks of opportunity with an ally in the way?
14
Cover with reach weapons
14
Can you maintain a grapple you are no longer capable of initiating?
0
Can you hold two weapons during a grapple?
6
Is this Homebrew Totem Spirit for Grapplers v2.0 balanced?
1
Trox's Grabbing appendages
2
Grappling and overbearing creatures only vulnerable to magic weapons
2
implementation of a ranged grapple attack for an artifact weapon
2
Can a player character grapple a ship?