Some of my paper printed 2 dimensional minis don't fit the 5th edition D&D grid. How can I correct this?

I'm designing and printing out my own paper minis for my 5e tabletop game but the size of the paper minis of some of the creatures don't match game space specifications.

An example, a medium sized creature occupies a single square on a grid. That square is assumed to be a 5 foot by 5 foot space in the game. The character doesn't fill the space. It fights in that space.
A medium sized 2 legged humanoid character stands upright and fits in the square perfectly. Other creatures, like wolves, are also considered medium sized creatures, but the mini spills out of the square because they are wider. The image of a humanoid is usually the view from the front. The image of the wolves is from the side so they are short but wider then the humanoid image.

If I try to make the wolf image fit a 5e grid square properly then the image needs to be compressed. This ruins the image and makes it look squished. How do I correct this problem? Should I scale down the height as well? Does that mean the humanoid mini's are too tall?

(The bulk of this answer concerns paper miniatures that stand up on the battlemap. For information regarding tokens that lie flat on the battlemap, see Addendum 2 below.)

It's difficult (and not really necessary) for paper miniatures to be the same scale as the map. You can approach this in many different ways, but the solution you choose has to be based on what looks good to you, because there isn't really a correct way to make paper minis.

Here are a couple of my own illustrations as examples: A lizardfolk greaser and his slavering wolf companion. 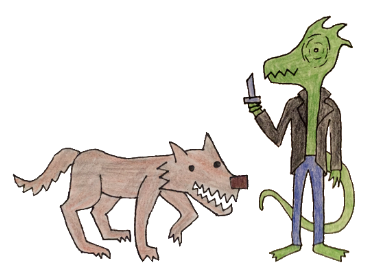 They're basically to scale with each other, right? Sure they are.

The typical scale for tabletop battlemaps is one table inch to five D&D feet. Assuming that's what you're doing, I'll be treating a square in my image editor as "one square inch" in paper terms. From your question, I get the impression that the minis you made look sort of like this: 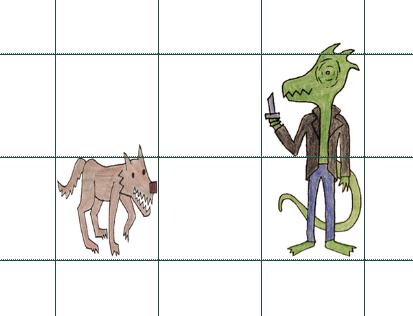 The humanoid figure takes up most of the width of the square, and looks great, but the wolf has to be squeezed to fit in, and it does not look great.

Of course, if the lizardfolk is about one inch wide and over two inches tall, and we take the figure to be to scale with the surrounding map, that means he's over ten feet tall, which is not what I had in mind. To make these tokens be (more or less) in proportion with the five-foot grid, we can do something like this: 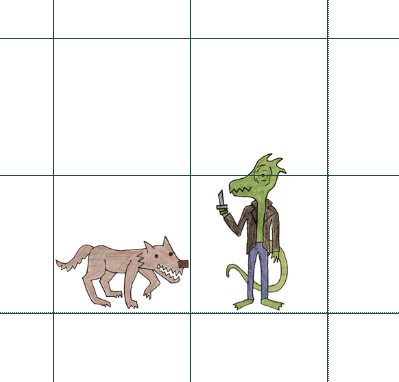 The lizardfolk is just over an inch tall, which means he's "really" about 5'9", which is what I was going for. The wolf appears to be five feet long and two and a half feet tall. When these guys are placed on a battlemap, your table will look like a real dungeon with a real lizardfolk and a real wolf that all got shrunk down to 1/60 scale. That may be exactly what you want!

...But for my money, they're both too small. (The squares in these images are probably not one-inch squares on your display, so look at a ruler to see what I mean.) I prefer for my handmade minis to be bigger, so they're more visible and easier to pick up (and so my players can better admire my unparalleled artistic talent). When I printed out this lizardfolk recently, I made him a little over two inches tall, as seen in image #2 above—it didn't bother me or any of my players that he was grossly out of scale with the surrounding battlemap. That kind of abstraction is totally allowed.

The "wideness" of the wolf is still a problem, though. If you print it out at the scale I picked for the lizardfolk, it's definitely too big. It takes up two squares on the map, which a Medium-sized wolf is not supposed to do: 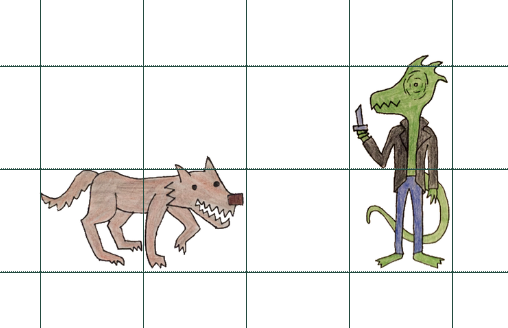 If we're sticking to one-inch squares, then it's going to be tough to determine what space this wolf is occupying. 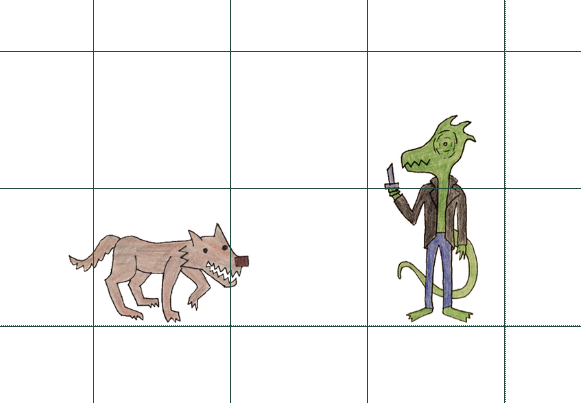 The wolf is spilling out of its square a little bit, but that's manageable. The lizardfolk is "technically" about seven feet tall, but I don't mind. What's important to me is:

(This may go beyond the scope of the question, but I hope it makes my answer more clear.) Regardless of the scale you choose, you can print out your minis in a few different ways. Here's how I do it. In my image editor, I put two copies of the image together, one flipped 180 degrees so they meet at the head (with a bit of space in between).

I make sure the grid really is one inch squares, and then I print this out on cardstock. The dotted line indicates how I cut the guy out, leaving about 3/4" at each lizardfolk's feet.

Then I fold between the heads, I fold below their feet, and I glue the two bottoms together, like this: 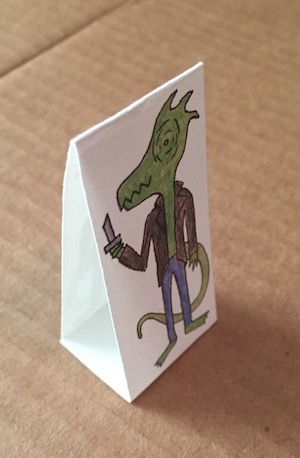 You could also fold the "bottoms" out and glue the backs of the two images together, creating a ⊥ shape. If I did that, I'd probably glue a square of cardboard to the bottom to make it sturdier.

I don't think any of the above solutions work if your character-representatives are going to lie flat on the battlemap. Any character who's big enough to see is going to be too big for its square—and everyone looks like they're lying on the dungeon floor. This is probably a matter of personal preference, but I don't like the idea at all!

What I'd do instead is use only the characters' portraits for tokens, maybe with some borders. Maybe something like this: 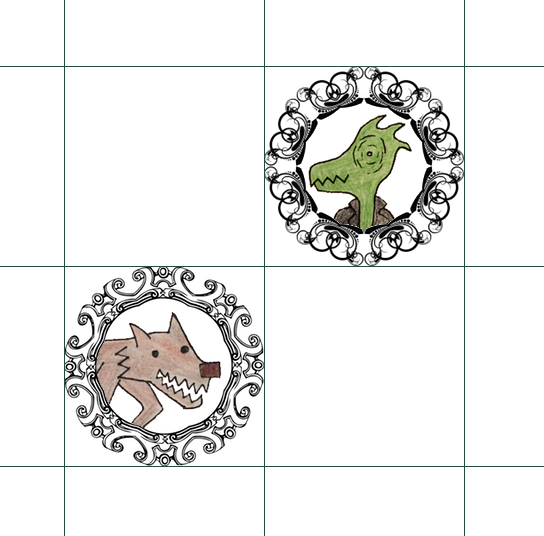 I could print these out, glue them to some cardboard, and cut them out really fast. They'd be easy enough to see and manipulate, and I wouldn't have to worry about scale at all. They'd travel well, too: I could toss them in a dice bag and not worry about their being bent or torn. (Also, I'd only have to draw the characters' heads, which would have saved me a few minutes.)

I've used several different versions of printed counters, flat stand up and variations on these.
I suggest you scale your pictures uniformly.
If it's difficult to make out which are what then consider whether that matters.
Are you really going to have an encounter with wolves and puma at once?
I suggest you think of these as abstracted playing counters rather than scale representations.

If absolutely necessary print bigger and use a base to define the square the creature is "in".

I'm not clear whether these are vertical or flat.
Make them vertical.
Print with 2 pictures if you can - front and back.
Arrange these head to head as a strip and allow for a "tab" at each end of the strip.
Glue to thin card ( or print directly on such ).
Fold the tabs "in" towards the blank side.
Glue to pennies.
From the side you have an open triangle like this but narrower: /\ Like the picture here:
http://www.warehouse23.com/products/SJG30-2101

The penny makes these way more stable than the type which has a plastic slot.

We tried numerous variations back in the day and this was the most practical. I think those cardboard heroes were my preference at the time but this is going back over 20 years and I have no idea what other options there are now.

Flat counters work quite well for objects or effects.

Stand on such a square and figure someone is watching yourself from above. There's a lot of empty space around you. It's the space you neet to manoeuver around and lunge or swing your axe/wand/whatever.

If you want to keep proportions between bipedal and quadrupedal creatures, bipedal miniatures should not take the whole square.

Unfortunately, when deciding the size of some creatures (especially those with a large wingspan) the designers sometimes considered only their main body, and this causes problems with the space occupied by the wings.

My solution is, use even larger squares. Size up your grid (or size down your miniatures, if you 3d-print them) so that the largest creature fits.

This also solves the problem with medium sized creatures being very often taller than 5 ft. (My solution when using a glass plane to raise flying minis from the ground was elongating grid cubes along the z-axis.)

Not the answer you're looking for? Browse other questions tagged dnd-5e miniatures or ask your own question.

8
Can large characters sqeeze through 5' spaces between 2 enemies, or do they do something else?
3
How does the 5th edition handle enhanced magic focuses
8
At what point do you leave a creature's reach when moving vertically?
4
How wide of an area are characters dispersed when a Rope Trick spell ends?
25
Is it impossible to flank a large creature on a hex grid?
9
How do I correctly run this trap from Curse of Strahd [Minor Spoilers]
7
Combat using a grid and touch spells
2
Can you use a Wall of Sand to blind a creature without obscuring it?