What is the weight, cost, and load limit of a medieval handcart?

I'm GMing a new campaign of GURPS Dungeon Fantasy RPG. The group is making characters, and they're beginning to realise that having no traditional bruiser-type party members with high strength significantly limits their ability to haul gear and treasure. So they're looking at acquiring a handcart.

(So far I think the highest ST in the party is the Swashbuckler, with 11, and it goes down from there through the Scout, Bard, Thief, and Wizard. Don't worry, we're not playing a typical dungeon-focused campaign. They'll be fine with a non-traditional party composition.)

The Exploits booklet details how to calculate effective load for one-, two-, and four-wheeled carts and wagons on page 22, but the Gear chapter only gives information for one-wheeled carts (wheelbarrow: Adventurers booklet, p. 112).

What are the stats for a two-wheeled handcart, like what a (stereo)typical medieval farmer might haul a load of hay or apples to market with? Absolutely necessary stats are load limit and its own weight; cost would be great too but can be more easily fudged. 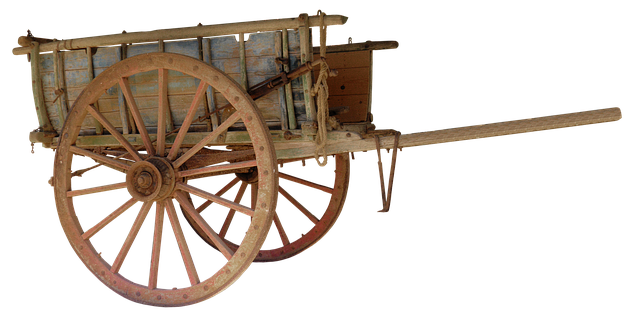 Looking to the obvious sourcebook, GURPS Low-Tech, turns up surprisingly little. There's discussion of handcarts as a technology, but the smallest cart it has statted up is an oxcart, and it doesn't provide a methodology for generating stats for unlisted vehicles. We're going to have to make it up. Fortunately that's doable in GURPS.

The wheelbarrow gives us a baseline to work with — stats will be comparable but heavier and more expensive, and with a greater load limit.

The nearest vehicle is the oxcart, but inconveniently DFRPG doesn't use standard GURPS vehicle stats in its drag/pull rules. Since it's not a standard vehicle stat, Low-Tech doesn't tell us anything about how much oxcarts weigh, as DFRPG wants to know. We do have a load limit of 0.6 though, which translates to 1,200 lbs., giving us the other end of the bracket for that stat. It's also $340, giving us a bracket of $60–$340 for cost.

GURPS is very happy to absorb real-world research and turn it into game-able stats when its sourcebooks don't detail something you want. I felt like a trip to the library would be ideal, but a bit extreme for this. Fortunately some determined digging around online (there's no much info about medieval handcarts online!) turned up a solid model.

From 1856 to 1860, there was a movement involving a number of large, organised Mormon migrations using — and named for — standardised handcarts designed by the church leadership, and there's naturally a Wikipedia article on the subject: “Mormon handcart pioneers”. Just like my adventurers, they lacked funds for oxen and wagons, but could afford handcarts.

(As a side note, I was completely unaware of this bit of history. This is a nice side effect of GURPS being so amenable to incorporating research data — I get to learn all sorts of things.)

The Brigham Young handcart design is described by the article:

the handcarts resembled a large wheelbarrow, with two wheels five feet in diameter and a single axle four and a half feet wide, and weighing 60 pounds. Running along each side of the bed were seven-foot pull shafts ending with a three-foot crossbar at the front. The crossbar allowed the carts to be pushed or pulled. Cargo was carried in a box about three feet by four feet, with 8 inch walls. The handcarts generally carried up to 250 pounds of supplies and luggage, though they were capable of handling loads as heavy as 500 pounds. Carts used in the first year's migration were made entirely of wood ("Iowa hickory or oak"); in later years a stronger design was substituted, which included metal elements.

That sounds about perfect for a more-or-less realistic handcart for use in a fantasy game. The year is late, but the technology is still about right due to cost pressures, and we're not worrying right now about the technological improvements that would have made building those handcarts easier.

That just leaves the cost to figure out. I decided to be somewhat generous and just eyeball it toward the low end: $100. That's not too much more than the $60 for the wheelbarrow, but not so cheap that it's obviously the superior choice — the 66% price increase only buys PCs a 43% load increase (the additional 150 lbs.), avoiding making handcarts strictly superior cost propositions when using multiple, by providing mildly diminishing returns.

These are the stats I came up with, in DFRPG formatting:

Handcart. A two-wheeled handcart with spoked and iron-banded wheels. Holds 500 lbs. Can be pulled by hand or yoked to someone. Divide effective weight of load by 10. $100, 60 lbs.

Not the answer you're looking for? Browse other questions tagged dungeon-fantasy-rpg or ask your own question.