In the run up to DnD Next the designers seem to have categorised gamers and/or classes that focus on Combat, Roleplay and Exploration. See this quote from Mike Mearls:

"Setting aside mechanics, I think you can boil D&D down to three basic activities: exploration, roleplay, and combat."

And then in reference to classes:

If the fighter is 100% damage for example, then maybe this other class is 80% damage/combat and 20% exploration, or some other mix of game elements. Each class has its time in the spotlight, and not all classes are built expressly for combat.

Emphasis mine in both quotations

I'm familiar with players who favour combat to roleplay, and classes that excel in one and not the other. I have really no idea what these designers mean when they talk about exploration.

What qualifies exploration gaming, in D&D?

Edit: From chat, I worked out what I think sets Exploration apart is the fact the the other two (Combat and Roleplay) involve some form of innate conflict resolution; there is a goal, challenge is over come, conflict is resolved. Is there a similar analogue for Exploration?

Edit the II: Furthermore, I've specifized this to D&D, as this seems to be how this question is being answered.

Mike Mearls says: 'While the rogue may have a lot of exploration abilities, the customization may allow more "stabby" rogues.'

From this I understand that he uses "exploration" to mean "thief business," locks and traps and ten-foot poles.

This contrasts directly with combat and with "roleplay," i.e. "bard stuff." It has its own roles and its own rolls.

Let me expand in the form of a table. Here is an example action each of four classes might take, in pursuit of each of the three pillars: 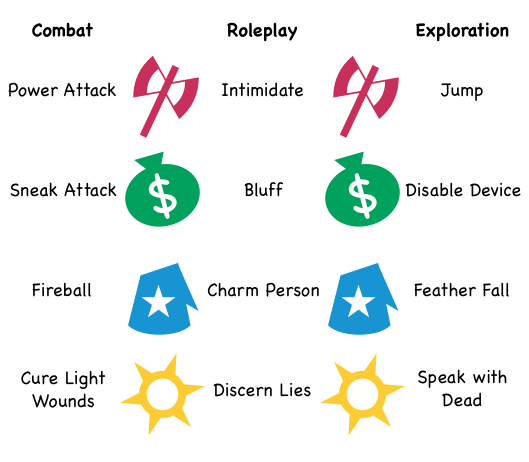 It's a semi-false trichotomy derived from minis-game-mode D&D play... and goes back to Gygax.

The Gygaxian mode was broken down that way because Gygax saw exploration as a meta-function, not an inherent part of roleplay, and mis-categorizes roleplay as being character-to-character interaction only.

Combat: encounters resolved by combat.
Roleplay: the off-map talking parts of the game triggered by encounters that aren't combats
Exploration: the moving through the environment to trigger encounters.

Keep in mind: Gygax was a prepared-environment kind of GM. His dungeons were well mapped out, and photos often show large groups, with the caller moving the minis on the maps, based upon player input, and the GM putting down new sections of map and/or new minis for monsters.

Gygaxian mode play can be very rich... but the exploration aspect is often about dungeon penetration.

I said semi-false... because it was a valid means of looking at how Gygax's games run. The exploration was a game and goal unto itself; the encounters, be they combat or roleplay, were speedbumps in that game.

Many modern gamers don't drop the roleplay mode just because combat has started, nor restrict it to just during encounters. And so, for purposes of game design, harkening back to Gygax is no more useful than trying to understand modern US law by looking at Romano-Christian laws... it provides a grounding, and some background, but it is incomplete and may be misleading.

I think the main pillars of D&D can be described in terms of relationships:

Combat and Role Play are primarily functions of the PCs' relationships towards NPCs. Either friendly or banter ridden (Role Play) or swords and spells type stuff (combat).

Exploration deals far more greatly with the PCs' relationships to the environment. Ultimately there are three major types of exploration.

for world exploration this is probably more often done in a survey style, you talk about moving from place to place, you may discover new places and new things. This may converge with either the role play or combat aspects in the form of random encounters with friendly, neutral or unfriendly NPCs.

City exploration probably has to do with finding out things like culture, amenities, religious affiliations etc within a new or old town. Perhaps with a lot or a little interaction with NPCs.

The final and probably most likely form of exploration is that of Dungeon exploration (no real dungeons required). This is where you start exploring the uncharted depths of a new dungeon, checking for traps and treasure along the way. In my (albeit limited) D&D experience this is where most of this pillars strength comes from. This is the domain of the rogue and perhaps the wizard, solving puzzles finding traps navigating winding mazes and finding new and interesting treasures.

Exploration based gaming in an RPG is where significant time and effort is spent on exploring and discovering things about an environment - most classically a dungeon, but wilderness, the universe, etc. are all valid exploration targets.

In the first edition AD&D Player's Handbook (p.101), the section entitled "The Adventure" breaks it up into three types - dungeon expeditions, outdoor exploration, and town adventures - but the verbiage is all about careful exploration and proper preparation and equipment.

There is in fact a section called "Exploration" in each version of D&D (as far as I know, don't know about 4th) that covers light, movement, travel encumbrance, messing with objects, and other similar activities. The sections of the rules you use while exploring, as opposed to combat or the like.

I would guess they are talking about exploring the game world, how its made up, its religions/gods/fiction/geography etc. I've heard this classification before in relation to players whose enjoyment of a game comes from a sense of discovery of various aspects about the world it is set in and not from hitting something with a big stick or exploring aspects of the character they are playing.

Going places and doing things. Journeying to strange lands. Delving into dungeons. Avoiding or disabling traps. Solving puzzles/riddles/mysteries. Unraveling the secrets of the game world. That kind of thing.

I would say that exploration stems from the desire to turn the unknown into the known. Every time you get to a door and you wonder what could be on the other side, you are exploring. As I used above in comments we had an exploration based Pathfinder game which started as a blank map, and by the end of several months was filled with ruins, groves, encampments, bridges and other things we had discovered on our journey of discovery.

Normally in DnD you would think of exploration as a dungeon, although many epic campaigns has led to exploration of far off lands, or other plains.

Exploration also imo does not end with physical locations. Delving into a mystery, tracking down some sacred treasure is great starts for exploring. When you start wondering "why" or "how" or "where" or "what" you are beginning to perform exploration.

Rewards for exploration can be intrinsic: I just want to know whats out there (Think Skyrim or Fallout) or manufactured: "I know there is something awesome in there, lets figure out how to get it".

Not the answer you're looking for? Browse other questions tagged dungeons-and-dragons rpg-theory or ask your own question.

15
How does one get players to explore more?

12
What is/are the basic mathematical models for skill-check based systems?
25
What is an example of a “Pure” Simulationist system?
17
What is “RPG Theory?”
43
What is the bad history around the three-fold or GNS model of RPG's?
18
What was Brian Gleichman's take on threefold gamism?
7
What are GNS, GDS, AGE model, Big model etc. called in academic publications?
15
How can I make theater-of-the-mind dungeon-crawling/location exploration fun and engaging?