Specifically the Stone Sculptor Wild Talent for Earth Kineticists. Can you create tunnels, or burrow with the stone shape spell? It says you may form stone into a shape that suits your purpose, but can you shape it into a tunnel to descend into the ground? Also, when you do this, is the stone you move displaced somewhere else?

The spell stone shape (and, by extension, the kineticist utility wild talent stone sculptor special ability) can be used to create tunnels through stone. Being able to shape stone, though, isn't the same as having a burrow speed. If a creature uses an effect like shape stone to create a tunnel, after that tunnel's created the creature must then traverse that tunnel using its available movement modes normally. (That is, the creature may have to climb down a newly created shaft like everyone else, although its walls could be shaped so as to have handholds that make the climb is easier.) A stone shape effect does not, for example, allow stone surfing à la the Marvel Comics mutant Iceman: 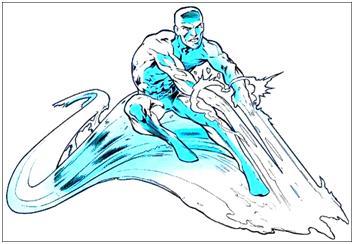 Also, the stone shape spell only says it shapes the affected stone and doesn't say anything about, for example, dissipating unwanted stone or whatever, so the excess stone must go somewhere.

(Whether the spell stone shape can shape stone to such a degree that the stone is compressed into a smaller and far denser unit or even shaped into dust so that it can be easily dispersed is a question for the GM, but this GM would likely say no. The stone shape spell is typically only a 3rd-level spell, after all, and there are other spells that shrink material, annihilate material, or make neat holes in walls.)

Not the answer you're looking for? Browse other questions tagged pathfinder-1e spells magic kineticist or ask your own question.

8
How far away can stone shape affect stone?
5
What are the precise uses of Stone Shape?

3
Druids, wild shape, and armor check penalties
2
How does tremor sense help earth elementals navigate underground?
11
Can you wild shape into an animal that has a template applied?
1
Explaining the druid wild shape ability
3
Stacking Wild Shape and Shapechange
5
Can tremorsense be used to target already-cast spells?
2
What can modify the area or shape of a Wall of X spell?
1
Transmutation, polymorph, wild shape, and alternate form
14
Can the Mold Earth spell dig more than two holes?