Does Protection from Poison saves against curse of Scorpion Armor?

My character has acquired a suit of Scorpion Armor. Unfortunately, the armor is cursed and deals 100 damage (or half on successful saving throw) when the character dons it. This will potentially kill my character instantly.

Would Protection from Poison help? 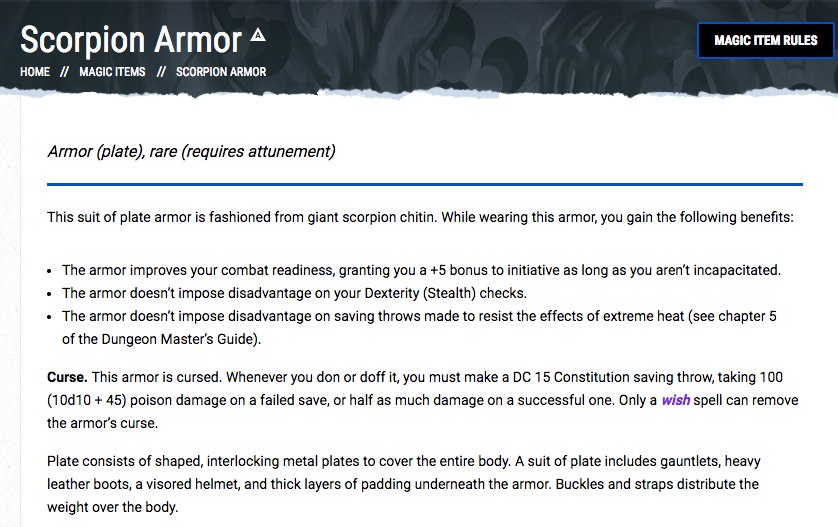 dnd-5e spells curses tomb-of-annihilation
share|improve this question
edited May 30 '18 at 13:49

The spell helps with the damage but not the saving throw.

The spell protection from poison gives the following benefits when cast on you:

For the duration, [you have] advantage on saving throws against being poisoned, and [you have] resistance to poison damage.

The armor you are trying to wear does not poison you; it deals poison damage to you. This is an annoyance of terminology in 5e: there is a condition called "poisoned" and there is "poison damage." The two often show up together but they are distinct, because one is a condition and one is a damage type. If you pretend they were called the "sickened" condition and "toxic damage" the disparity might be a little more clear.

However, whether you succeed and take half damage (about 50) or fail and take full damage (about 100) from the armor's curse, that amount of poison damage is then reduced by half (to about 25 or about 50, respectively). You do have resistance to the poison damage.

So, yes, you would be benefited by using that spell before putting on the armor, but only with the damage resistance, not with the saving throw.

Protection from Poison will help

From the Protection from Poison spell description:

For the duration, the target has advantage on saving throws against being poisoned, and it has resistance to poison damage.

This very fine distinction is a valid consideration when you compare the Protection from Poison spell description and the two following similar effects:

Antitoxin: A creature that drinks this vial of liquid gains advantage on saving throws against poison for 1 hour.

(In this related question about green dragon's breath which causes poison damage and Protection from Poison, the heavily supported and accepted answer states that the saving throw advantage should apply even when the Poisoned condition is not caused by the dragon's breath.)

Protection from Poison will help.

The target has advantage on saving throws against being poisoned, and it has resistance to poison damage.

Clearly you would have resistance to the poison damage.

I also believe that you would have advantage on the saving throw, based on this related ruling.

After the feast, you have immunity to poison for 1 hour (which would be a good time to put your armor on or take it off).

The creature... becomes immune to poison.

Jeremy Crawford ruled on twitter that the immunity to poison part of Heroes' Feast applies to both poison damage and the poisoned condition.

This can logically be applied to how protection is meant to work. Both spells are equally ambiguous about poison damage vs the poisoned condition (it seems as though the designers consider them to be very closely related). Since one spell has an official ruling, we should be able to use that for a Rules as Intended interpretation to help resolve the RAW ambiguity. The spells are not an exact match, but for me the important takeaway is how loosely the designers treat poison (seeming to conflate the damage type and condition in various places).

Not the answer you're looking for? Browse other questions tagged dnd-5e spells curses tomb-of-annihilation or ask your own question.

17
Is a green dragon's breath weapon “poison” for the purposes of “advantage on saves against poison”
10
May a character with Evasion under the effect of Starmantle avoid all damage?
12
How does the Amulet of Proof against Detection and Location interact with the mind spike spell?
46
How to resolve multiple 'start of turn' triggers
13
Using Blight on a tree construct?
37
Does blocking an attack with the Shield spell still trigger Armor of Agathys?
19
Does the Polearm Master attack work with poison?
8
Does the Warforged Resilience racial trait apply to saving throws against poison damage?
21
If an attack causes additional damage after a saving throw, is it counted as a separate source of damage for the purpose of failed death saves?
4
Does a Rogue's Evasion work for spells?