How do I adjudicate attempting to put manacles on an unwilling creature?

I have a player in my campaign who has recently wanted to use manacles. While the Player's Handbook entry for manacles describes in a pretty detailed way how difficult it is to escape from manacles, it doesn't give any indication as to how difficult is to put them on an unwilling creature, particularly in the chaos of lots of things happening at once that we call combat.

But that's okay: I'm a DM, and I can make something up. But I feel that I'm not really sure how to assess the difficulty of this, especially as I have no idea about how manacles actually worked in the medieval era that D&D is inspired by, beyond a general idea that "it's an old-fashioned form of handcuffs". Here are a few ideas I have:

How should I handle players attempting to put manacles on an unwilling creature during combat? I know that this may be a bit subjective, and I can ultimately do anything reasonable here without the world ending, but I'm hoping there are some Good Subjective answers out there of people who can "back it up" with their experience of handling either manacles specifically (as I'm guessing this isn't the only group with a player who saw manacles on the equipment list and started getting ideas), or at least experience with creating new "contests" that inhibit opponents.

My backing up is simple: this is how I see manacles from Medieval Era: 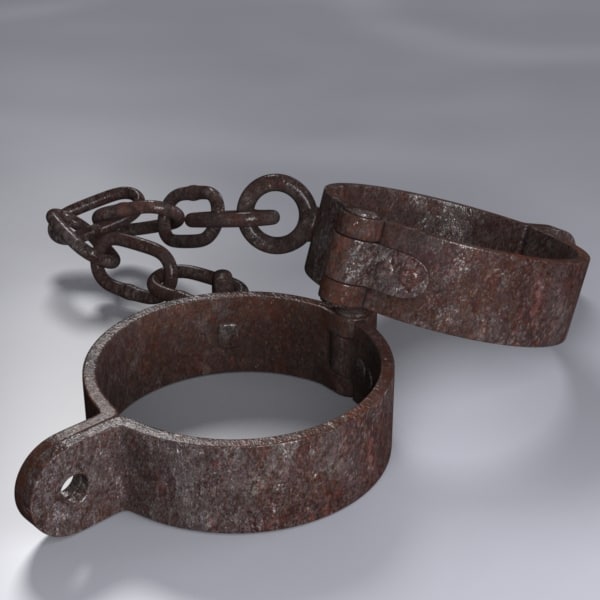 After putting them in the wrist or ankle, you have to pin it with a (thing like a) nail. It doesn't simply close itself.

It seems, to me, almost impossible to achieve against a resisting character. Heck, even modern days handcuffs aren't easy to put in someone before they are restrained.

That said, I never had player attempting it, but as I said, I simply would tell them that's a task too hard to accomplish and it's probably easier to drop the enemy unconscious and then put the manacles on. If they insist, the character tries, but simply fails.

As a note, we have a similar question about Force-feeding potions, and personally I like this answer.

Practically, you can only handcuff an incapacitated or willing person

Even with modern handcuffs, you need your target to be either willing or incapacitated. Particularly illuminating are articles about tasers, which have quotes like this:

There are also videos of people getting forcibly handcuffed, and they are mostly either fully incapacitated, compliant, or at least not resisting violently at the time they're getting handcuffed.

While D&D characters are superhuman, old-style manacles will be even more difficult to apply than modern handcuffs. From a simulationist, practical perspective, then, your PCs will have to incapacitate a creature before being able to handcuff them.

Applying manacles in combat competes with other features

Practical considerations aside, I usually try to consider if allowing a particular maneuver invalidates potential mechanical choices. Because manacles basically impose the incapacitated condition, they can invalidate two important mechanics: the Grappler feat and a number of spells.

First, the Grappler feat. Ordinary grappling doesn't really impose any restrictions on a creature--they can't move away, but they are otherwise unhindered. It requires an entire feat and a second successful grapple check to impose the restrained condition. Even then, the restrained condition only imposes disadvantage on attacks, and doesn't prevent things like spellcasting. Therefore, manacles, which would impose a worse condition than restrained, must require at least two successful grapple checks, and probably much more than that in order to not make the Grappler feat (totally) worthless.

Second, spells. A number of spells, such as Hypnotic Pattern, Hold Person, Banishment, and more, impose the incapacitated condition or worse. Spellcasters incur an opportunity cost for having spells, both from the spell slot and having the levels to cast it. Moreover, manacles have an escape DC of 20, but spellcasters can't access such a DC until very high levels. Allowing the party's barbarian to pull off a spell-like effect for essentially free thus devalues a number of spells.

Therefore, applying manacles in combat has to be more costly or difficult than actual class features. Considering the real-world requirements for handcuffing a person, that leads me to rule that a creature must first be incapacitated before manacles can be applied. This rule also creates an interesting niche for manacles, too--they can be used to extend the duration of incapacitation beyond the original effect, meaning that they still have a use in combat (compared to unconsciousness, which basically requires you to have already won the fight).

Knock them out, then put on the manacles

There is the mechanical option to first knock them out. Once they are at 0 HP, unconscious(see Conditions), and thus incapacitated(see Conditions), putting on the manacles ought to be simple.

Knocking a Creature Out

You can always apply an ice pack later if you feel bad about having to knock them out to get the manacles on. :)

My Interpretation; You can only apply manacles to incapacitated creatures

However, at my table

if the only remaining hostiles in an encounter are both grappled and prone (with two free hands, use shove on a grappled creature, if you shove them prone this does not end the grapple and they cannot stand up until the grapple is ended because their speed is 0), you can make a grapple check with disadvantage to restrain them with rope or manacles.

In RAW, things will usually play out to reach the same result, except the party would take turns smacking the enemy until they fell unconscious. The main reason for this is to allow my players to capture someone without necessarily beating them. Since it requires 2 or 3 successful actions (2 special attacks and 1 action) which can be undone by a single successful shove or escape grapple action by the grappled creature, it really only benefits the party in situations where the opponent is truly helpless.

I use grappled + prone because they combine to make the opponent extremely disadvantaged, and can be attempted by anything with hands. If the enemy is alone they have very little chance of actually escaping their aggressor. If the grappler has an ally present, they can use the Help action to remove the disadvantage, making it a normal grapple check.

Use the player's description to create a skill challenge.

Putting manacles on an enemy in combat is not a simple matter, so ask the player how they plan to put them on a creature that is going to actively resist the action. Brute force? Speed? Misdirection? Are any other characters assisting? Once you get the 'How' it becomes a lot easier to assess the needed skill checks.

This situation is not unique. When the players present you any action that you aren't prepared for, just think things through, ask for details, and imagine for yourself and/or discuss with the players logical outcomes of the action. Then pick the attributes/skills that appear appropriate, set a DC, and have the player roll.

13
Does attempting to escape a grapple cost an action, or just a single attack within the Attack action?
11
Do larger creatures have advantages when grappling creatures of smaller size?
39
What balance problems arise by allowing grappling as an option for an Opportunity Attack?
14
What check would my PC roll to escape if he were grappled by a mimic?
5
How does the Overrun action work?
6
What would be the ramifications of replacing Multiattack with Extra Attack?
0
In term of game balance, what repercussions should players expect if DM wouldn't count Grapple and Shove as "an attack"?