How long does it take to travel between Oerth and Toril by spaceship?

I understand that in Spelljammer, it's possible to travel by spaceship between the worlds of two different campaign settings, such as Oerth (World of Greyhawk) and Abeir-Toril (Forgotten Realms) by sailing through the phlogiston between crystal spheres.

Assuming you don't have to wait for a portal to open in either crystal sphere, how long does it take to travel between those two worlds?

Travel times depend reliably only on one thing: the existence of a phlogiston river. Helm operator level matters for ship speed only at tactical speeds, not over long distances, so we can disregard navigator level (Spelljammer boxed set, Concordance of Arcane Space, p. 35). Rivers have directional flow, so only rivers that flow from your origin to your destination are useful; few rivers are bidirectional. Travel through the disordered, non-river phlogiston is dangerous and more than twice as slow on average, assuming you arrive at all.

Greyspace and Realmspace are fortunate: a river flows bidirectionally between them (sidebar spanning pages 86 & 88), making travel possible and relatively easy from Oerth to Toril. The time to travel through the phlogiston from any Sphere’s wall to any other Sphere’s wall is variable, depending on unknown factors, and ranges from 10 to 100 days (p. 54) (disregarding, as you say, whether conveniently-placed portals are currently available).

Travel within the Spheres depends on whether you encounter trouble that delays you (p. 72–3), and where you enter the destination Sphere (which is random), which determines how far you are from the destination planet. We'll ignore encounters for now in order to determine a baseline of travel times. Where you leave your origin Sphere is presumably the closest sphere wall to the origin planet's current location, unless factors interfere with the direct route, so we can use minimum distance there.

Spheres have a diametre twice the orbital diametre of the outermost planet (p. 52). Per Appendix 2: Travel Times, Oerth to The Spectre is 40 days, and Oerth is the centre of Greyspace, making it 80 days to the sphere wall. In Realmspace, Toril is the third planet out, and its minimum travel time to H’Catha is between 14 days (closest approach) and 18 days, giving a minimum days’ distance from a random location on the sphere wall of 28 days, or (given that Toril is 2 days from the Sphere's primary/centre, an orbital diametre of 4 days) 28 + 4 = 32 days at worst if you enter the Sphere on the far side of Toril’s orbit. For such a long distance we're ignoring takeoff and landing times in gravity wells, since they're on the order of tens of minutes (p. 53) and are less than a rounding error.

Given convenient portals in both Spheres’ crystal walls, and given a lack of interesting encounters (both big ifs), we can calculate a baseline travel time from Oerth to Toril at 80 days (Oerth to Greyspace wall) + 10–100 days (phlogiston river) + 28–32 days (random Realmspace entry point to Toril) = from 118 to 212 days.

Around 130 days from Toril to Oerth; give or take encounters

I will try to show you a quick way of computing these travel times in general, and then use it for the Oerth-Toril question in particular.

There are various maps and spreadsheets created by the fans. One in particular, by Nerik, compiles data from the official Spelljammer sources (as well as fan material) and can be downloaded from here. A very small portion of that map can be seen below. 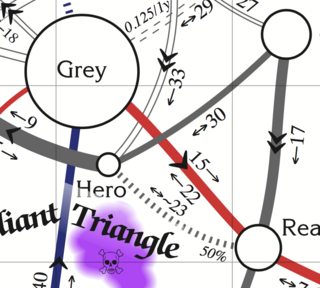 Here is an example calculation. To make things easy, we first zoom in the pdf to make the 50-day sphere size to appear as a 1cm-diameter circle. So our scale becomes 5days per mm.

In this scale, Greyspace measures 34mm in diameter, while the Realmspace is 13mm. To have a rough estimate, it is reasonable to assume that the main planet is close to the center of the sphere (in Oerth's case it is at the center anyway), so the travel times within the spheres are roughly: 34/2*5 = 75 days and 13/2*5 = 32 days, respectively. (As you can see, these values are in very good agreement with the values quoted in the answer by SevenSidedDie.)

Next we look at the time of travel in the flow between the spheres. We see that while the flow is bidirectional, it is faster to travel from Greyspace to Realmspace (15 days) than the other way round (22 days). Please note that both these numbers are within the range of 10-100 days as quoted by SevenSidedDie from Concordance of Arcane Space. In various official products (including novels), the actual travel times between particular spheres have been documented. Unfortunately, I could not identify the original source for the Greyspace-Realmspace values in Nerik's flow map, so we could take that with a grain of salt.

Not the answer you're looking for? Browse other questions tagged adnd-2e travel spelljammer .

19
How can I manage long-distance travel by the PCs?
7
What happens to a priest travelling from one world to another in the Prime Material Plane?
12
How long should it take to travel across Barovia?
5
What is the Travel Time between Phandalin and Greenest?
10
Did the spellplague change the cosmology of other crystal spheres too, or just realmspace?
5
How long does it take for a 20th level wizard to prepare his full allotment of spells?
8
Is this how Natural Explorer works for long distance travel?
3
How long would it take for commoners to travel from Tian-Xia to Avistan?
15
How long does it take to sail to Evermeet from the Neverwinter harbor?
9
Can creatures outside of Crystal Spheres dream?