Are there White Powers in Ravenloft, or was that our DM’s invention?

Soo many, many years ago when the 3rd Edition was the latest edition in the game, we had a big Campaign in the Ravenloft in 2nd (cause old school guys) that we played for almost 4-5 years.

During our time in the Mist, we found out a LOT of the Ravenloft Lore. This was mainly because our DM was a huge fan of the Ravenloft setting, and had every novel and every other official source: Invidia to Pharazia to the small islands in the west part of the plane. But one thing came to me; looking back at the memory lane it is still not clear to me if it was from official source or if it was from the DM's mind.

In our latest adventures we learn that the Dark Powers are not the only Powers there: that there is, in a smaller number, something called the White Powers (or something synonymous with good). Has anyone ever read in a Ravenloft novel something like that?

Is the existence of the White Powers canon, or it an invention of our DM?

There are White Powers. But they can only act indirectly to challenge the Dark Powers, in the demiplane of Ravenloft. See the novel 'Lord of the Necropolis' by Gene Deweese. This the excerpt from that novel when they are revealed.

P.S. When Azalin talks about his "tormentors" he is referencing the Dark Powers. 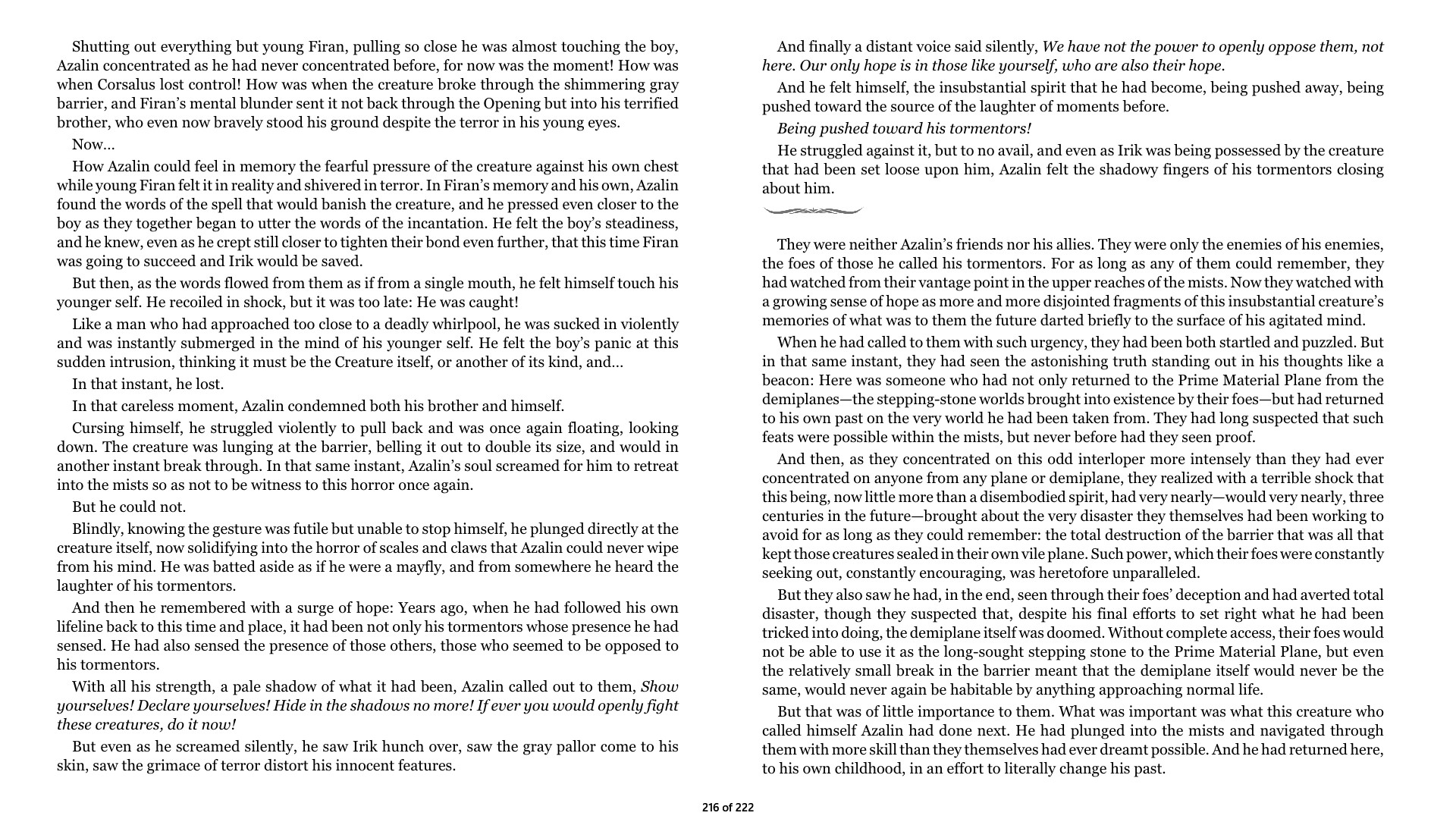 There is no such thing as "White Powers"

Not officially, at least. Mind you, I'm no expert in Ravenloft, having read only the 2nd edition core book, 3rd edition core book, nearly all the creature books (Van Richten's guides and bestiaries), and maybe a dozen adventures. Other than that, I have browsed the Mistpedia extensively when creating my own campaigns. That said, my knowledge is missing several Ravenloft lore books and novels.

But I never heard the term White Powers until today. Which leads me to assume that your GM made that up, for reasons known only to him.

The Dark Powers are an unknown entity formed in the plane of shadows, which the sole purpose is to give torment to evil souls. There is no clear definition of who and what they are, which is intentional to keep that mysterious air (or mist) about them.

If there is ever anything doing "good" in Ravenloft, it's the Dark Powers tormenting a dark lord under a false disguise, or another entity entirely, like a demon or devil, or even corrupted celestials that are doing something for the greater good, oblivious of their evil-doings. An example of that are the Living Gods, which are mortals who attempted to become real gods and failed, turning into half-fiends who act as real gods on their region.

It isn't disclosed how deities like Horus or the Morning Lord work exactly in the dark realms, but it's certain that certain deities are darker and/or corrupted versions of their real versions outside of Ravenloft, like Belenus. But one thing is known, divine worshippers feel disconnected once they enter Ravenloft, taking a few hours or even days to adjust, sometimes having to call for another god to get their powers again. This is called the Unspoken Pact, and there is no clear conclusion about why and how it happens.

Not the answer you're looking for? Browse other questions tagged ravenloft .

10
Is there a Ravenloft Campaign Setting for 4E that ISN'T the board game?
5
Are there other versions (art mainly) of the Ravenloft Tarokka Deck available?