How would adventures be run with traps on maps that show where they are?

I am currently prepping an adventure and have purchased some source material from an older D&D 2E one-shot (The Shattered Circle) which I have loaded onto Roll20 and am prepping for a 5E adventure.

The map that comes with the adventure, and would have been on the front cover of the adventure has notations as to where the traps are on the map. Here is a small snippet as an example : 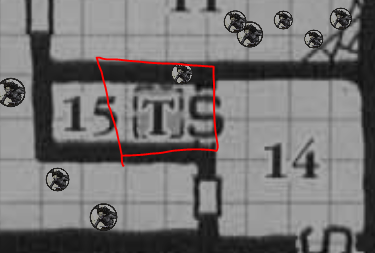 I know my players, and if they see that they are going to spend as much time as possible trying to figure out what trap is there and how to get around it. I can think of a few options to make it less of an issue in my game however it made me wonder how adventures like this would have been run.

So My question is How would this map have been used "back in the day"? (Would it be that this map would only have been used for guidance to the DM and then they would draw their own?)

In the old days, in the 1980s and 1990s, scenarios never came with a map at an appropriate scale for use with miniatures. The GM's map would be complete, with secrets, at a much smaller scale, in the region of 0.25" on paper to 10' of character scale. For playing with miniatures it would be used like this:

This worked well, at least in part because combat was much simpler. The grid was an aid to positioning, rather than there being hard rules about creature size and space occupied. There were no Attacks of Opportunity, and everything about combat was less formal.

I never ran across a GM drawing their own map in advance for a published scenario. There wouldn't have been much point to doing that, unless the GM wanted to re-arrange the scenario significantly. I have seen GMs at conventions, where they could have a large table, with a pre-drawn map at figure scale, which they would reveal piece by piece by removing sheets of paper that they had placed over it. However, this is surprisingly cumbersome if the map is at all complicated, and always seemed to me like too much work for the (minor) improvement it made to the game.

I will assume that "back in the day" means pre-2000 (before 3rd edition). In my experience and locale, it was simply far less common to play with miniatures as they were expensive and heavy, and less available and detailed than what they are today. As a result, most groups in my area would play in the theater of mind style. Comments below suggest that this definitely wasn't the case everywhere or even in most places, so my prior assumption about the authors and publishers catering to that demand must've been wrong.

The reason the maps were printed so small was that printing images was rather expensive. As such, printing two maps (one with DM information and one without) would've been considered insane, especially if one was printed at a scale large enough for miniatures. Even today it isn't uncommon for printed adventures to not include player copies of dungeons (although, PDF adventures often do as there is essentially no additional cost). Due to the adventures not including miniature-sized maps, the groups that did play with miniatures had to redraw the map.

Not the answer you're looking for? Browse other questions tagged dungeons-and-dragons history-of-gaming battle-map or ask your own question.

18
What adventures are there out there that would fit in this old school campaign?
92
How has D&D's guidance to DMs on when to extrapolate from written rules and when to improvise changed over time?
19
How best to progressively reveal the layout of a location to players?
7
Upgrading from D&D Adventure System to a full D&D Campaign
27
How can I secretly notate which squares on a combat map are traps?
20
How do I balance detailed encounter maps with not wanting to give away my dungeon layout?
12
How can I manage maps for battles that happens in streets of a city?
3
Setting up a Dungeon Map
8
How to Fog of War an official adventures map